A sobering new Security Council (SC) report circulating in the Kremlin today first noting that that just 6 corporations (Comcast-NBCUniversal, Disney, CBS, Viacom, News Corporation and AT&T) control 90% of the media outlets in America, says most important to know about them is that they don’t actually report news, rather they are a “media echo chamber” that creates for profit and entertainment value an environment where a person only encounters information or opinions that reflect and reinforce their own.

Feeding this vast American for profit and entertainment “media echo chamber” are “newspapers of record”, which are major newspapers with large circulations whose editorial and news-gathering functions are considered authoritative, the five largest of whom are The Wall Street Journal, USA Today, The New York Times, The Washington Post and Los Angeles Times—and most important to know about these “newspapers of record” is that they are owned by multi-billionaire oligarchs—such as The Washington Post being owned by the richest man in the world Jeff Bezos, whose staggering wealth is estimated at $197-billion.

Every single hour of every single day these American “newspapers record” cite each others’ news stories—the effect of which sees stories being magnified and amplified—after which these now magnified and amplified news stories are fed into the “media echo chamber” and spewed out to unsuspecting Americans using such propagandist terms like “multiple sources say” and “confirmed by multiple sources”—and sees these propagandist terms being added to by others such as “unnamed sources requesting anonymity”.

A shamefully highly-dangerous and totally irresponsible example of this occurred yesterday, which was when the leftist Washington Post published their article “On Ukraine’s Doorstep, Russia Boosts Military And Sends Message Of Regional Clout To Biden”, wherein while using the propagandist terms “officials said” and “analysts said”, then astonishingly stated as fact: “Russia’s motivations for the buildup are still unclear”—though in reality this “fact” is an actual lie now being cited by other American “newspapers of record”, and has now entered into their nation’s leftist “media echo chamber”—thus proving, beyond any doubt, that the leftist American media doesn’t care at all about informing their nation’s citizens about how close they are to death—and stands opposed to the Russian people, whose truthful media report to them such truthful facts about the looming war in Ukraine like: “Defence Minister Sergey Shoygu’s recent weekend in the taiga with Putin suggests that such an operation might be weeks away or less…What we can assume with confidence is that he did not travel there to discuss meteorites, drink beer and walk in the forest”.

Being deliberately kept from the knowledge of the American people by this incestuous leftist propaganda media cabal is the fact that Ukraine signed a declaration of war against the Russian Federation on 24 March—a declaration of war that’s now reached the level of President Putin authorizing the use of nuclear weapons to defend the Russian Federation against Ukraine, the United States and any NATO nation supporting them—and instead of informing their American viewers of these truthful facts, it instead saw leftist CNN (that’s owned by the world’s largest telecommunication company AT&T) interrupting their schedule with the “breaking news” about the discovery of a “secret” Russian military base in the Arctic—a Russian military base so “secret” that four years ago, in 2017, it saw the BBC being one of the many world media outlets taking a virtual tour of it offered by the Ministry of Defense when it was opened—and as one would expect from a leftist propaganda mouthpiece like CNN, its so-called “breaking news” conveniently left out the fact that because a massive portion of Russia lies above the Arctic Circle, of course this is where military bases of all kinds would logically be built.

Quickly joining this Russiaphobia war propaganda was the leftist Washington Post publishing the deceitful and lying article “Putin Is Slowly Murdering Alexei Navalny. Here’s How The U.S. Can Save Him”—an article showing the truth of the saying “It’s been said that there are two very different Russias…The one 146 million live in and the version depicted by the Western media”, as the vast majority of Russians know this Western media creature Navalny is in prison right where he deserves to be for his crimes—in response to these leftist lies saw Foreign Ministry spokeswoman Maria Zakharova stating: “Washington, who always worries about the human rights situation in the world, but not at home, continues to ignore our arguments…Instead, it dreams up fairy tales and nonsense about the incarceration conditions of inmates in Russia, including Navalny”—and while making up their leftist Russian “fairy tales”, is the same United States turned police state—as evidenced by Supreme Socialist Leader Joe Biden sending out armed police to threaten anyone criticizing his allies in the US Congress, and last week saw Biden police thugs removing a US Capitol protestor from his jail cell, zip tying his hands, then beating him so brutally it fractured his skull and left him blind in one eye.

And as if all of this American leftist insanity isn’t enough, today it sees massive numbers of US and Chinese warships squaring off against each other in the South China Sea—a Biden ordered buildup of military power against China that caused Beijing to logically ask “Do Chinese warships go to the Gulf of Mexico?”—sees this occurring at the same time the US Air Force has had to admit the truth that it’s unprepared for a war with China—that was followed by a display of sheer lunacy when the US Navy posted on their official Twitter account a picture of the American Eagle wearing a blue surgical mask—which makes it no surprise that in a just released secret recording a top Chinese official said out loud the truth everyone knows: “The biggest source of chaos in the world today is the United States”.

With “chaos” defined as complete disorder and confusion, one can only imagine with horror how normal and sane American people are coping with what is now surrounding them at every turn—some of whose latest examples include the CDC posting on their official website a mask wearing NPC wojack meme, which is named after non-player characters within video games used to symbolize unthinking drones who just regurgitate whatever the establishment feeds them—that was quickly joined by leftist CNN going full-on “woke imperialism” saying US troops should be left in Afghanistan to die for women’s rights—after which CNN reached “peak insanity” when it declared that Asian-themed FONTS are now racist.

Most gravely concerning about this leftist media generated chaos overtaking America, however, was noticing leftist tech giants Facebook and YouTube censoring Christian Church Easter videos because they show the crucifixion of Jesus—a mass censorship of Jesus coming at the exact same time one of America’s largest retailers Target stocked its shelves with a book containing a Satanic prayer that begs the Lord to help blacks “hate white people”—the latter of which is astonishing to see in a country like America that overcame its racial divisions and twice elected a black president—which brings into further clarity articles like “A Self-Loathing Ruling Class Cannot Endure”, wherein it truthfully notes: “The U.S. now has an official regime of lies, supported by an almost worthlessly dishonest media, and scores of millions of Americans brainwashed into the false view that they live in an evil country”.

In the midst of this insane chaos being deliberately inflicted upon the American people by these truly demonic leftist media and socialist political forces, though, a glimmer of hope is now seen coming from the largest and most read “newspaper of record”, the Wall Street Journal—who while knowing the true threat of the nuclear war death facing Americans, have just published their warning article “Must the Justices Create a Trustworthy Press?”, wherein it first notes: “The Supreme Court in 1964 defined a pretty good standard if journalists cared to adopt it…It requires them really to care whether what they are reporting is true”—then gives depressing, overwhelming and detailed factual evidence proving the entire leftist media establishment are nothing but lazy liars—but to remedy this atrocity being openly committed against the American people, sees it honestly and simply asking: “Why not just hire smart people and ask them (or free them) to do honest reporting?”. 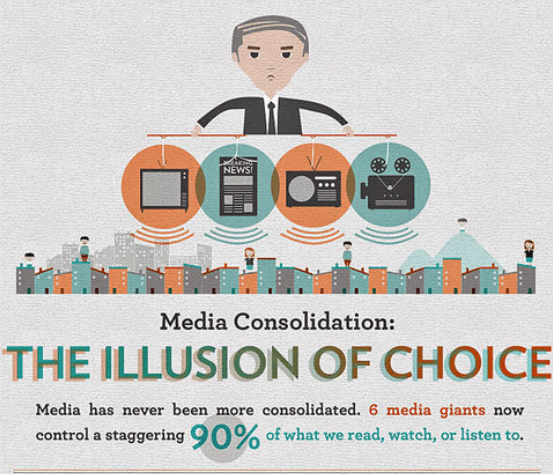