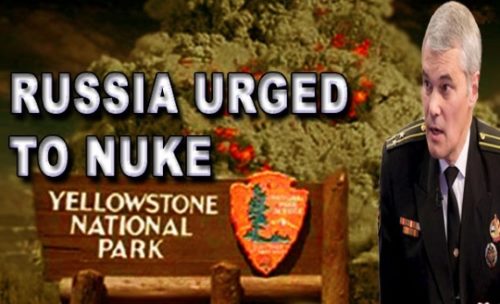 A Russian Analyst says the entire USA could be wiped out by detonating nukes in the Yellowstone Super Volcano and the San Andreas Fault defeating the US in war.

Russian geopolitical analyst says the best way to attack the United States is to detonate nuclear weapons to trigger an eruption of the supervolcano at Yellowstone National Park and another detonation along the San Andreas fault line on California's coast.

The president of the Academy of Geopolitical Problems based in Moscow, Konstantin Sivkov said in an article for a Russian trade newspaper, VPK News, that Russia needed to increase its military weapons and strategies against the "West" which was "moving to the borders or Russia".

He has a conspiracy theory that NATO – a political and military alliance which counts the US, UK, Canada and many countries in western Europe as members – was amassing strength against Russia and the only way to combat that problem was to attack America's vulnerabilities to ensure a "complete destruction of the enemy". 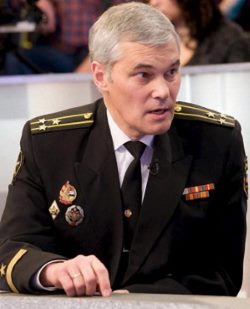 Conspiracy theory: The president of the Academy of Geopolitical Problems based in Moscow, Konstantin Sivkov.

"Geologists believe that the Yellowstone supervolcano could explode at any moment. There are signs of growing activity there. Therefore it suffices to push the relatively small, for example the impact of the munition megaton class to initiate an eruption. The consequences will be catastrophic for the United States – a country just disappears," he said.

"Another vulnerable area of ​​the United States from the geophysical point of view, is the San Andreas fault – 1300 kilometers between the Pacific and North American plates … a detonation of a nuclear weapon there can trigger catastrophic events like a coast-scale tsunami which can completely destroy the infrastructure of the United States."

He said the Russian geography on the other hand would protect it from a tsunami or a volcano attack. Few people live on the coast in Russia and Siberia which rests on basalt would withstand similar attacks. 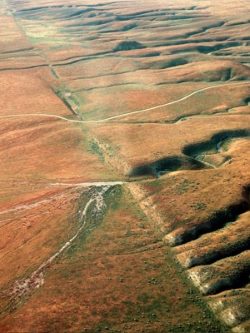 Mr Sivkov, who spoke at the 2013 Moscow Economic Forum, said by 2020 to 2025 Russia would have amassed "asymmetric weapons" in its arsenal for the attack.

"The situation for us today is comparably worse than half a century ago," he said.

"The weakened economic potential in Russia, the loss of the 'spiritual core of what was the communist idea', and the lack of large-scale community allies in Europe such as the Warsaw Pact, Russia simply cannot compete against the NATO and its allies."

In December last year, the vocal military strategist told Russian newspaper,Pravda.ru that there is a "developing standoff between Russia and the West" and the US's ultimate goal was to "destroy Russia".

Mr Sivkov accused American politicians of committing several crimes including causing the deaths of 1,200,000 people in Iraq. He believed the only way for the "American elite" to be held accountable was for its military forces to be destroyed.

"American politicians have committed a variety of crimes. Will anyone be held accountable for those crimes? What about the international law, the UN and other organisations? Are they doing anything?" he asked.

Mr Sivkov told Pravda that the idea of the US preparing for a serious war against Russia using cruise missiles was plausible given that it had already launched a thousand missiles in Yugoslavia and Iraq.