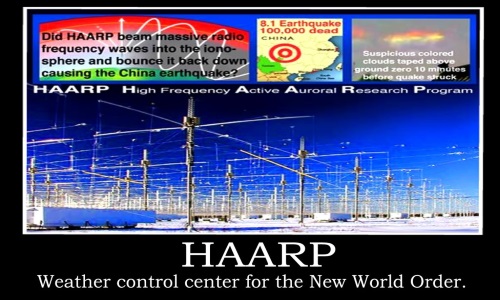 Too many freak accidents. military using weather control HAARP. And WiFi frequencies along with smart meters.. They’re killing our birds and wildlife. F-ing with the electromagnetic fields the birds navigate with. Wake up SHEEPLE before it’s too late…MAN is next… agenda 21 expire date for Man 2030.. Bye Bye everyone.

HAARP – which stands for High Frequency Active Auroral Research Program – was set up by the US government in 1993, and run by the US Air Force and US Navy.

Although mostly top-secret, critics accuse HAARP of attempting to weaponise the planet.

The US Department of Defence has allegedly attempted to harness and control everything from the weather to earthquakes and use them as weapons.

HAARP was based on a US Air Force base in a remote part of Alaska, far from civilian eyes, until military involvement officially ended in 2014.

It is now run by the University of Alaska Fairbanks in Gakona, Alaska.

According to official papers HAARP was set up “analyse the ionosphere and investigate the potential for developing ionospheric enhancement technology for radio communications and surveillance.”

However, some conspiracy theorists are convinced the military is still involved and it was really set up to research how to use artificial weather as a weapon against other countries and even how to trigger earthquakes or volcanoes.

HAARP operates out of the HAARP Research Station in Gakona, Alaska, where it has a high-power radio frequency transmitter that can perturb a small portion of the ionosphere. Other instruments are then used to measure the perturbations.

The goal of the program is to understand the physics of the ionosphere, which is constantly responding to influences from the sun. Solar flares can send solar particles racing toward Earth, occasionally disrupting communications and the electrical grid. If scientists could better understand what happens in the ionosphere, they might be able to mitigate some of these problems.

But the Air Force is no longer interested in maintaining HAARP, according to David Walker, the Air Force deputy assistant secretary for science, technology and engineering.

Proposals for such a weapons systems have been laid out to the US Air Force, and experts believe the weather-changing device is already battle-ready, Daily Star Online can reveal.

Penned by three US colonels, and four majors, the document states the commanders make the case for weather modification promising it would allow the Pentagon “complete dominance”.

Multiple scientific theories lay out how weather modification would work – most them achieved by using planes, missiles or artillery shells to introduce chemicals, energy or nanomachines into the clouds and upper atmosphere.

Perhaps because of this tie to the military, the facility has had more than its fair share of conspiracy theories. Here’s some of the most popular and imaginative:

Hugo Chavez, former president of Venezuela, said HAARP caused the Haitian Earthquake.
Wrestler-turned-political commentator Jesse Ventura has suggested HAARP bombards people worldwide with mind-controlling radio waves.
A Russian military journal has said that HAARP could potentially flip Earth’s magnetic poles, according to WIRED.
Chemtrails are part of HAARP’s program of weather modification.
The Space Shuttle Columbia was shot down in 2003 as “target practice” for the HAARP project.
HAARP was initially set up by Nazi Germany.

At a Senate hearing on May 14, Walker said the Air Force has no interest in maintaining the site, and is moving in another direction in ionospheric research.

Climatic warfare would be a game changer as superpowers burn through billions to the world develop futuristic ultimate weapons to wage war.

With that said, you can use the same techniques to store specific non perishable foods that big name food storage companies use like Wise Company and Mountain House use; many times you can do it cheaper (saving yourself quite a bit of money on long term survival food), which means you can afford to purchase a lot more food in bulk, specific food storage supplies (foil pouches and oxygen absorption packets) and the 5 gallon airtight buckets you will use as an outer container, storing several foil pouches of food at a time.
For complete instructions (and to find out the “amazing” shelf life you can get for several foods — we’re talking up to 10 – 25 years), read this article after you finish this one: The Best Emergency Food Methods to Keep Your Family Alive).