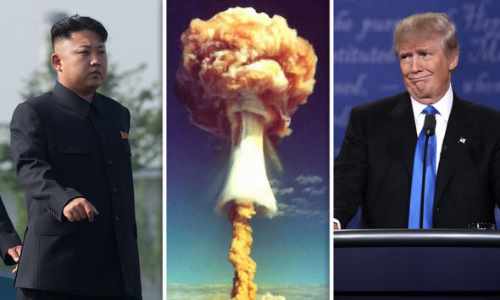 The Event Is Coming Soon – Summit between Donald Trump and Kim Jong Un Being Negotiated as Khazarian Mafia Attempts to Start War Fail The Khazarian mafia’s rule by murder, blackmail, bribery, and propaganda is being systematically dismantled in ways that can no longer be denied.

These fanatics, who wish to force human history down a path to destruction based on ancient books, have failed yet again in recent efforts to start World War 3. This was seen in North Korea, in Kurdistan, and in Iran as their increasingly desperate gambits are checked at every corner. In the case of Iran, U.S. President Donald Trump was threatened and blackmailed into renouncing the nuclear deal with Iran, but facing opposition from the military as well as top allies, all that Trump could do was to appease the Khazarians with bellicose rhetoric.

Even Trump’s rhetoric was met with a statement by the leaders of top U.S. allies the UK, Germany, and France contradicting Trump’s claims that Iran was breaking the nuclear deal. The statement read in part that the deal “was unanimously endorsed by the UN Security Council in Resolution 2231. The International Atomic Energy Agency has repeatedly confirmed Iran’s compliance with the JCPoA through its long-term verification and monitoring programme.”