The Final Signs Before The World Ends ( Everything is unfolding just as the bible foretold. Wars, Volcanic Eruptions, Earthquakes, Extreme Weather, Christian Persecution, Violence and more! ) 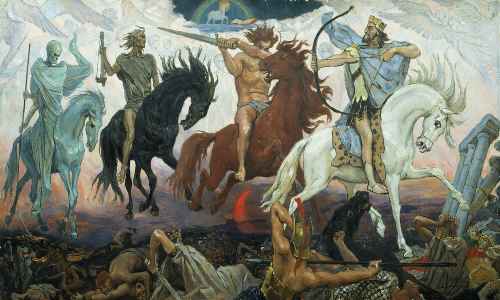 Current Events Linked To Biblical Prophecies. Everything is unfolding just as the bible foretold. Wars, Volcanic Eruptions, Earthquakes, Extreme Weather, Christian Persecution, Violence and more! Matthew 24:3-14 3
Now as He sat on the Mount of Olives, the disciples came to Him privately, saying, “Tell us, when will these things be? And what will be the sign of Your coming, and of the end of the age?”
And Jesus answered and said to them: “Take heed that no one deceives you.
For many will come in My name, saying, ‘I am the Christ,’ and will deceive many.
And you will hear of wars and rumors of wars. See that you are not troubled; for all[a] these things must come to pass, but the end is not yet.
For nation will rise against nation, and kingdom against kingdom. And there will be famines, pestilences, and earthquakes in various places. All these are the beginning of sorrows.
“Then they will deliver you up to tribulation and kill you, and you will be hated by all nations for My name’s sake.
And then many will be offended, will betray one another, and will hate one another.
Then many false prophets will rise up and deceive many.
And because lawlessness will abound, the love of many will grow cold.
But he who endures to the end shall be saved.
And this gospel of the kingdom will be preached in all the world as a witness to all the nations, and then the end will come.

How will the World End?
The topic of how or when the world will end is something that is on the mind of a lot of people all over the globe now, and the trending of this subject grows each time a natural disaster happens, or a war, or an outbreak of disease like the recent Ebola outbreak. Just take a look at all the movies coming out of Hollywood with end of the world themes.

There are serious threats coming from many different places concerning the future of this world. But are any of them feasible theories as to how this world will end? They are certainly feasible, but the likelihood of them actually happening is another matter. So can we truly answer the question which is on the lips of many people around the world? Do we REALLY know how the world is going to end? Or can we only speculate as to the future of this world?

There is only ONE source of information which we can rely on to tell us the future – BIBLE PROPHECY!

Will it be a cataclysmic event? Is it something to concern us? Should we prepare?

The answer to all those three is a resounding YES! So what does Bible prophecy say concerning how this world will end? Let’s take a look at some Bible verses concerning the end of the world:

Revelation 15:1 …’And I saw another sign in heaven, great and marvellous, seven angels having the seven last plagues; for in them is filled up the wrath of God.’

Revelation 16:1 …’And I heard a great voice out of the temple saying to the seven angels, Go your ways, and pour out the vials of the wrath of God upon the earth.’

Matthew 24:27 …’For as the lightning cometh out of the east, and shineth even unto the west; so shall also the coming of the Son of man be.’

1 Thessalonians 4:16 …’For the Lord himself shall descend from heaven with a shout, with the voice of the archangel, and with the trump of God: and the dead in Christ shall rise first.’

2 Thessalonians 1:7-8 …’And to you who are troubled rest with us, when the Lord Jesus shall be revealed from heaven with his mighty angels, in flaming fire taking vengeance on them that know not God, and that obey not the gospel of our Lord Jesus Christ.’

Revelation 6:14-17 …’And the heaven departed as a scroll when it is rolled together; and every mountain and island were moved out of their places. And the kings of the earth, and the great men, and the rich men, and the chief captains, and the mighty men, and every bondman, and every free man, hid themselves in the dens and in the rocks of the mountains; And said to the mountains and rocks, Fall on us, and hide us from the face of him that sitteth on the throne, and from the wrath of the Lamb: For the great day of his wrath is come; and who shall be able to stand?’

2 Peter 3:10 …’But the day of the Lord will come as a thief in the night; in the which the heavens shall pass away with a great noise, and the elements shall melt with fervent heat, the earth also and the works that are therein shall be burned up.’

THE ‘CATACLYSMIC’ SECOND COMING: 1. Jesus returns with His angels from heaven 2. Great commotion in the skies 3. Mountains and islands move out of their place 4. A great resurrection of the dead believers

Isaiah 13:13 …’Therefore I will shake the heavens, and the earth shall remove out of her place, in the wrath of the LORD of hosts, and in the day of his fierce anger.’

Isaiah 24:1 …’Behold, the LORD maketh the earth empty, and maketh it waste, and turneth it upside down, and scattereth abroad the inhabitants thereof.’

THE EARTH LAID WASTE: 1. The lost are destroyed at the second coming 2. The earth is laid waste and desolate

So how will the world end? This world as we know it will end when Jesus Christ returns at the second coming. At that time there will be great commotion such as has never been seen before. The lost are destroyed and the saints are taken to heaven to be with the Lord for all eternity. But this is not the complete end for this world, because after the saints have been with Jesus in heaven for the 1000 year millenium, then we return to this earth with New Jerusalem. The wicked are resurrected to receive their final judgment which is the lake of fire. The earth is renewed by that fire and the saints dwell on the new earth forever (2 Peter 3:13).