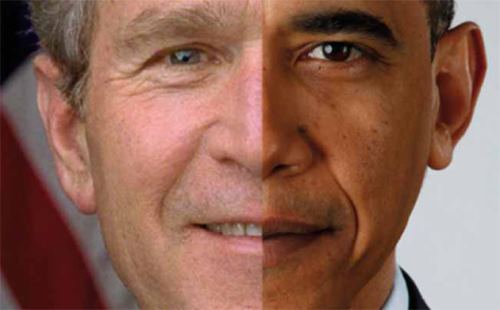 Powers once granted are almost impossible to take back.

After 13.5 years, there is more than enough evidence for reasonable people to conclude that the presidencies of George W. Bush and Barack H. Obama are easily the most destructive in U.S. history.

When historians speak of failed presidencies or weak presidencies, they are typically referring to presidencies characterized by uneven leadership, petty corruption by self-serving cronies or in extreme cases such as the Nixon presidency, abuses of executive power.

A destructive president weakens or corrupts these core structures in favor of executive-branch powers, and passes these unconstitutional powers to the next executive for further expansion.

The Bush and Obama presidencies have effectively dismantled the rule of law and the Constitution by invoking essentially unlimited executive powers in the name of “national security:” we the citizens of the U.S. can now be accused of violating secret laws, be indicted in secret, tried in secret and sentenced to life in prison based on evidence fabricated in secret, i.e. declaring unclassified documents classified after the fact to incriminate and imprison whistleblowers.

How is this any different from totalitarian fascist regimes?

This is absolutely contrary to basic civil liberties defined by the Constitution. Who benefits from this destruction of fundamental civil liberties? (Always start by asking cui bono–to whose benefit?)

The Big Lie is that this destruction of the foundations of the rule of law and civil liberties is for our own good: if the President and the National Security State don’t grab all these powers and deprive you of your constitutional rights, bad guys will destroy the nation.

This is of course the same old tired justification used by dictators and despots everywhere, and it is always a lie. The truth that must be hidden is that this wholesale expansion of executive powers at the expense of civil liberties, democracy, the rule of law and the balance of powers benefits the executive branch.

Every abuse of the law is now declared legal by executive order. Anyone questioning the legality of extra-legal abuses of power is told “this is legal because it was authorized by the President.” In other words, executive power is now unquestioned and cannot be challenged.

Presidents Bush and Obama have directed this expansion of the National Security State because it greatly enhances the power of the Presidency. This is how we get a president who is delighted to discover that he’s good at killing people remotely with drone strikes.

The expansion of secret programs and secret wars has engorged the Pentagon, the C.I.A. and the N.S.A., not just with funding but more importantly, with new powers granted by the executive branch and rubber-stamped by an impotent Congress and supine Supreme Court.

The president’s power is greatly enhanced by this expansion of the National Security State, and the self-serving “patriots” empowered by the essentially unlimited secrecy are free to do whatever they please under the umbrella of executive privilege.

True patriots attempting to defend basic constitutional rights are labeled terrorists by the phony patriots busy destroying the foundations of the nation. The Orwellian doublespeak is as unlimited as executive power: a citizen who releases unclassified material about the secret abuse of power can be accused of treason on the Kafkaesque basis that unclassified material can be considered classified if it exposes the abuse of executive power.

All of this is well-documented and has been in the public realm for years. There is nothing mysterious about the destruction of basic rights or the abrogation of the balance or power or the rule of law. It’s visible and painfully obvious to anyone who cares to read or watch a few interviews of whistleblowers who have been hounded and harassed by the Obama Administration.

“To me, there’s a psychology that’s not often written about: What happens when you have this much reach and power, and constraints of law and even policy simply fade into the woodwork.”

This destruction of the fundamental building blocks of the nation has been rubber-stamped by gutless Republicans and Democrats alike. Cowed by the threat of appearing “soft on terrorism,” left and right alike have scrambled to appear “tough on terrorism” by approving the wholesale transfer of power to the National Security State and the executive branch.

This destruction of the fundamental building blocks of the nation has been rubber-stamped by gutless Republicans and Democrats alike. Cowed by the threat of appearing “soft on terrorism,” left and right alike have scrambled to appear “tough on terrorism” by approving the wholesale transfer of power to the National Security State and the executive branch.

It is laughable to see so-called liberals and conservatives alike in Congress kow-tow to the National Security State while claiming they have effective oversight, even as the revelations of whistleblowers reveals them as clueless toadies with no real grasp of what is being done in the name of the American people they claim to represent.

Powers once granted are almost impossible to take back.

What president will give away essentially unlimited executive powers established as “law” by previous presidents? We don’t elect saints as presidents, we elect infinitely ambitious people desiring power. We should not be surprised that such people not only consolidate the power they inherit but actively seek more.

We should also not be surprised that all these power grabs by the executive branch and the National Security State are cloaked in secrecy, and that anyone who dares to reveal the power grabs and abuses of power to the public is declared a traitor and crucified.

A traitor to what? It’s a question every citizen should ask and answer for themselves.