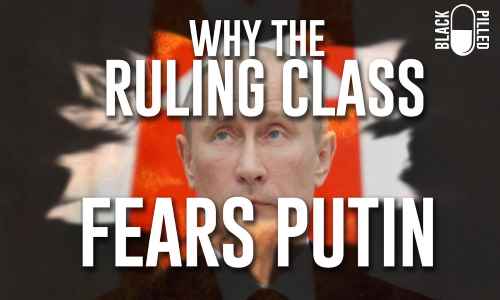 These bastards did the same exact thing to Germany in the 1920s. Then they left the Soviet Union after the collapse in 1991 (after bleeding that country, literally), and fled to the good ole USA! They have been here for almost 30 years, and are carrying out the same shit. They own the media, our politicians, our central private federal reserve, and our public education. You better wake up your sleepy friends, otherwise we are going down a road to real modern day slavery and war in the streets.

America’s transnational elites despise Putin for one simple reason: He is not a globalist.

Liberals have no problem dealing with Islamist dictatorships, such as Iran or Turkey.

RINO Republicans, such as McCain and Graham, not only praise Saudi Arabia but are happy to take its money.

Hence, Russia’s problem is not its authoritarian regime. Rather, it is because Putin is a major obstacle to the relentless march of globalism.

Putin is an ethno-nationalist, who champions Orthodox Christianity and a resurgent Great Russia. He is opposed to the European Union and NATO enlargement. He seeks to defend vital Russian interests — whether in Syria, Crimea or Ukraine. In short, he is implacably opposed to liberalism’s holy trinity of open borders, mass immigration and multiculturalism.

Putin’s real sin is that he will not bow to the gods of the New World Order.

This is why Putin has become public enemy number one.

Our ruling class ultimately craves a Cold War 2.0. They want to permanently encircle Russia, eventually hoping to bring down Putin’s regime. Russia, however, is not our enemy but a natural ally, especially in the war against radical Islam.

Yet, to trigger a conflict with Russia the government-media complex must fabricate a casus belli — in this case, that Putin and Trump worked hand-in-hand to steal the election from Hillary. It is the greatest lie of our time, one that is almost straight from George Orwell’s 1984.

America should extend its hand to Putin, not slap him in the face. Hopefully, Trump’s presidency will change this. 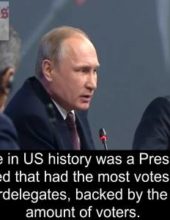