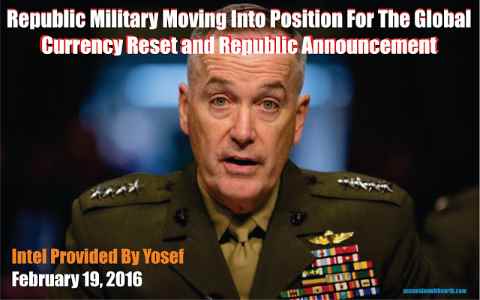 Notes and Video Edited by ~enerchi of AscensionWithEarth.com

More intel/rumor is coming out from various sources.  Last week ART mentioned that interim republic president General Joseph Dunford survived multiple assassination attempts.  This week we hear Yosef provide updates to the republic military movements taking place.  Apparently the new republic military led by Interim President General Joseph Dunford with coordination among China, Russia, and Pentagon White Hats are positioning themselves for the Global Currency Reset and announcements for the new/reinstated Republic.
Yosef also provides additional intel/rumors that USA Corporation CEO, Barrack Obama, did surrender to the Chinese back in August 2013 and is supposed to comply for a peaceful transition over to the Republic.
I took the liberty to edit and upload Yosef's specific intel into a YouTube video for your listening and viewing pleasure.  You can also read some notes I put together below.

As always, this is just rumor until proven otherwise.  This is posted for your Awareness!


Hey xs The Admiral is a retired Navy Rear Admiral ( that's 2 stars ) and served on the National Security Council under President Reagan. After graduation from the Naval Academy he went to BUDS (Seal Training). He graduated and served 2 tours in Vietnam ( 3 silver stara and 2 Purple Hearts). He has earned many more medals and awards serving our country. If you do not know his backgrond then there you go. Now straighten out this x who keeps posting that he was not an Admiral. (source)