Top 5 Places To Avoid When The Dollar Collapses 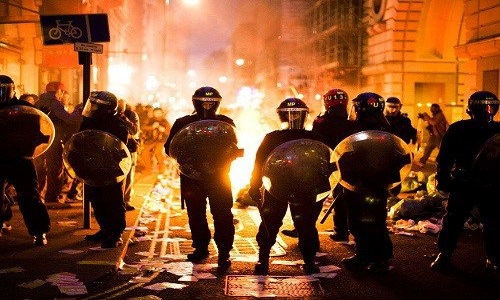 It is well known that the U.S. Federal Reserve continues to print money to pay down debts owed to countries such as China. It is also known that the Fed printed billions to "bail out" banks and create "stimulus" plans to boost the economy. There are a lot of doomsayers on the internet and in media that say this devalues the U.S. dollar both locally and globally.

Technically their claim is correct: each dollar used to be backed by actual gold; that backing was removed in the 1970s and ever since then money could basically just be printed up. But this is where the doomsayers logic ends. Their belief is that because money's value is only as good as the economy's belief in it, the value can disappear because there is no gold backing the paper money. Once confidence in the dollar is lost, many doomsayers say that the U.S. economy will completely collapse. A few popular predictions are being made across the internet and in the media by doomsayers: vanished and now gold is the only accepted currency.

The concept cited is "hyperinflation." When the dollar collapses we will be thrown into a state of chaos and lawlessness. Money will be burned like in Germany a few decades ago due to lost value. People will steal and commit other crimes to stay alive and with no economy there will be no one working to maintain the infrastructure. Gold and silver will become the standard once again. Which is oddly suspicious, because when you Google anything about the dollar collapsing, you get a lot of sites trying to sell you gold and gold trading schemes.

Since other countries are trying to move the World Reserve Currency away from the U.S. dollar due to decreasing value, the U.S. will be left high and dry by the other countries. Countries will stop lending to us and the interest on the existing loans will default. What is likely to happen if the U.S. dollar collapses (based on something known as "logic"). Here are a few possible situations:

1.) The U.S. dollar collapses and there is a brief time of chaos. However the U.S. chief export is consumption, we consume the highest amount of resources and goods in the world. Countries that once sold to us can no longer sell if there is no money, so the dollar could in theory be propped up by another currency. Imagine a dollar backed by the yen, the Euro, or once again by gold.

2.) There are over 300 million "consumers" in the U.S. Other economies would suffer if U.S. citizens suddenly lost all of their money and their spending power. The U.S. could adopt another currency or begin consuming using multiple currencies and abandon the dollar. Financially, it makes little sense to let a huge consumer base collapse and vanish so global companies and countries that export often to us will step in.

3.) Like a repo man coming to collect his due, the countries that the U.S. government owes large amount of debt to will come in to collect their payment. Of course what happens if someone can't pay? Things get taken away. China, a country who the U.S. owes billions to could technically lay claim to the U.S. So we would become a part of another country altogether. As an interesting side note, some local towns in America have started to print their own currency that is traded and accepted among merchants within the town.

This shows an extremely important concept in the debate of what happens if the dollar fails. The townspeople in these towns aren't backing their local money with gold or other currency, rather they back it with their confidence. The local money has zero actual value; the only reason it is useful for purchases in the town is because businesses and people that accept it agree that is has some value; they can accept it for a sale and take it to another accepting business to trade for goods and services.

This experiment is a microcosm of the national economy and even the global economy, paper money's primary value exists only because the economy continues to believe in its value.

Technically you could pick up an orange and claim that oranges are equivalent to what was once $100. If a lot of people also believed it, you'd be buying and selling in oranges instead of dollars. In the end one key concept came to mind when trying to dispel the doomsday predictions: As long as you have some currency that the economy sees as having value you can continue to make and spend money. Does it matter if that currency is the U.S. dollar, a Euro, gold, or an orange?

What will happen if the "Dollar Collapses"

How Preppers Stockpile Food to Prepare for Economic Collapse

When I am asked how preppers stockpile food for an economic collapse or other emergency, I am often surprised by the reaction that people have. They naturally assume that I have a bunch of pallets of Army MRE’s or freeze-dried survival meals in the garage.

Don’t get me wrong, if I had a rich man’s bank account I might have a climate controlled bunker stockpiled with freeze-dried survival meals. But I live in the real world and as a Prepper Consultant I have to advise people who don’t have unlimited resources.

So how does a typical prepper stockpile food for an economic collapse or other “SHTF” (Sewage Hits The Fan) scenario? First, it is nothing as glamorous as what you might see on an episode of “DoomsdayPreppers.”

Step one is to divide your thinking and your food storage into short-term and long-term. Short-term is thought of as the food storage you have to last you for up to 3 months. Long-term is considered food storage that will last you up to one year.

The thing about short-term food storage is that it includes all the items in your pantry that you eat every day. It is constantly rotated and used up before it goes out of date. There is nothing exotic or freeze-dried and certainly no Army MRE’s.

Long-term food storage may be freeze-dried, but that is some very expensive food. More likely, it is food that is in Number 10 cans that you can get from a LDS (Latter Day Saints, or “Mormon) church cannery. These foods are staples like wheat, flour, potato flakes and oats that will last in their cans for 10-20 years, so rotating them is not a major consideration.

The thing about these long-term food stores is that, since they are not “just-add-water” emergency / survival foods, you actually have to know how to cook.

So Job One for a serious prepper is that each week they want to be cooking at least one meal from items in their long-term food storage, to ensure that when the time comes, they will be already acclimated to using them.

Stockpiling food this way is both very practical and very economical and can be done step by step instead of requiring a single, budget-busting purchase of survival foods from some online store.

However, preppers do more than stockpile food for an economic collapse or other emergency. Preppers are also thinking about being stranded in their cars away from their supplies and are thinking about what they will do if the power grid goes down.

Disclaimer: This article is opinion based with likely scenarios derived from logic based situations.
Discussion includes doomsayer fears, logical outcomes, and a good example of how currency value is subjective.