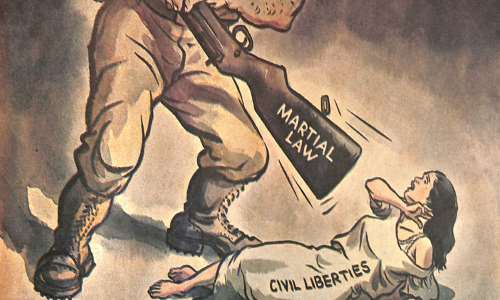 I believe, wholeheartedly, that the United States is the best country in the world. Need proof? Check out our long history of success and prosperity. Now that I’ve got my flag-waving out of the way, let’s get into the juicy stuff. America’s prosperous history is marked with some truly hideous blemishes. These ugly periods largely coincide with declarations of martial law. Simply put, martial law is when a governor, Congress, or The President legally acknowledges shit has hit the fan. In these circumstances habeas corpus is suspended, the military steps in, and locally elected officials lose efficacy. 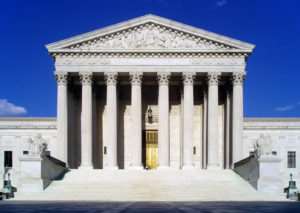 By D-Ray a contributing author to SHTFBlog & Survival Cache

In response to the Boston Tea Party, the British issued the Massachusetts Government Act. The intent of the Act was to nullify the existing colonial government in Massachusetts by replacing it with a royally appointed governor.  Every American knows how this story ends: the Revolutionaries waged war with the British and won their independence. The formation of The United States is a pretty nice silver lining to this anti-democratic act. For this reason, I’ll consider it the least terrible of the 5.

Prior to the Battle of New Orleans, General Andrew Jackson implemented martial law in the area. An intervening judge demanded Jackson restore habeas corpus. In the most ballsy, Andrew Jackson-esque move, he had the judge arrested and continued with business as usual.

As President, Jackson showed the same contempt towards the legal system. In a separate incident, when Chief Justice John Marshall delivered his ruling precluding the removal of Native Americans from their lands, Jackson said, “John Marshall has made his decision now let him enforce it.”  Jackson ignored the Supreme Court and did as he pleased. While I should be disgusted by Jackson’s disregard for the law, I can’t help but respect his steel tenacity.

In an incredibly shameful turn of events, the Tulsa Municipal government wascomplicitous in the murder of over 300 black citizens.  Amidst the destruction and murder, the National Guard, with permission from local authorities, implemented martial law. They eventually restored peace but the damage was lasting. In this instance, martial law was absolutely necessary to restore law and order.  The Tulsa Race Riot is a unique case because the destruction leading up to martial law, not the implementation of martial law itself, was so deplorable.

In order to respond to increasing dissent in the Union during the Civil War, President Lincoln enacted martial law. The chief result of this was the suspension of due process and the establishment of military tribunals. It is unclear how many innocent people were deprived of justice during this period. In any case, the Supreme Court ruled Lincoln’s imposition of martial law to be unconstitutional in the 1866 case Ex Parte Milligan. 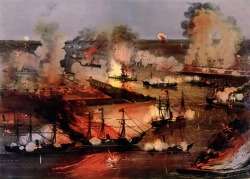 Justice David Davis condemned the Lincoln Administration’s practices in the Court’s majority opinion. The Court gave martial law and Lincoln the finger saying, “The Constitution of the United States is a law for rulers and people, equally in war and peace, and covers with the shield of its protection all classes of men, at all times and under all circumstances.”  I can’t think of a more eloquent way of telling the government to leave due process the hell alone.

After seeing ‘1914 Colorado’ in first place, I imagine many of you are puzzled. In fact, you’re probably thinking, “Hold on, dumbass,  how does a petty conflict in Colorado beat out the Civil War?” This is a fair question. Allow me to explain.

In the early 20th Century, labor conditions in American coal mines were deplorable. Miners were poorly compensated for long, difficult hours in hazardous environments. When the miners did return home, they returned to houses and towns owned by their employers. Miners were not allowed to leave the company owned towns without express permission from their employer.  On many levels, it is difficult to differentiate these feudalistic mining systems from slavery.

Not surprisingly, miners in Colorado unionized and protested their abhorrent work conditions. Rather than acquiesce to basic demands like an 8 hour work day, the Colorado Fuel and Iron Company enlisted the support of the Governor. Martial law was declared, the National Guard arrived, tensions escalated, and the standstill between workers and the State culminated in a violent boil. Two dozen people, including women and children, were killed in a lopsided event which would later be referred to as the Ludlow Massacre.

While habeas corpus during the Civil War was suspended for the preservation of The Union, the Ludlow Massacre happened because feudal corporate systems wanted to retain total power over their employees. There was no noble silver lining or justifiable purpose behind the Ludlow Massacre. For this reason, I consider it to be the most heinous.

My Plan For Martial Law

People can say whatever they want about the second amendment but there is no denying that a gun would have been useful in any of the five incidences listed above. For this reason, I keep my SKS sealed in a monovault outside my house. When chaos strikes and the next President Jackson suspends habeas corpus, I’ll be ready to go full Viet-Cong mode in the Rocky Mountains. 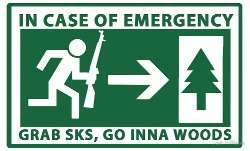 Even though I’m a solid hunter, food is going to be an issue. I have some MREs on deck but I could always use more. For now, I’ll just place unreasonably high confidence in my ability to consistently kill elk in the Zirkel Wilderness. When shit hits the fan, a little bit of hubris may not be such a bad thing.

Realistically, the most dangerous thing for me will probably be the harsh winters. My tent could use an upgrade but my sleeping bag is solid. Winters in the Zirkels are never a cake walk but as long as I don’t freeze to death I’ll be happy.  Let me know what you would do in the event of martial law. Disagree with my list? Tell me why in the comments.

About the author : D-Ray is a recent graduate of CU Boulder and currently enrolled in a law school on the East Coast. By day, he is a mild mannered content writer; by night, he banishes unruly drunks into the black purgatory of night as a bouncer. He is passionate about the Constitution and First Amendment Rights.