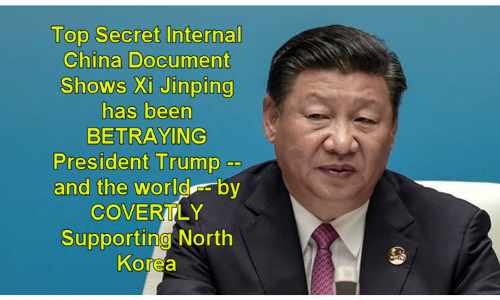 China's Communist Party adopted a secret plan in September to bolster the North Korean government with increased aid and military support, including new missiles, if Pyongyang halts further nuclear tests, according to an internal party document.

Chinese leaders also agreed to offer new assurances that the North Korean government will not be allowed to collapse, and that Beijing plans to apply sanctions "symbolically" to avoid punishing the regime of leader Kim Jong Un under a recent U.N. resolution requiring a halt to oil and gas shipments into North Korea.

A copy of the four-page Top Secret China Document Assuring Help to North Korea was obtained from a person who once had ties to the Chinese intelligence and security communities. An English translation appears at the bottom of this article.

CIA spokesmen had no immediate comment on the document that could not be independently verified.

A Chinese Embassy spokesman did not return emails seeking comment.

"There will never be a friendly solution to the North Korean problem if this continues to happen," the president stated on Dec. 28.

Release of the classified internal document is unusual since China's communist system imposes strict secrecy on all party policies. Exposure of the secret Central Committee directive could indicate high-level opposition within the party to current supreme leader Xi Jinping, who has consolidated more power than any leader since Mao Zedong.

China's leaders, according to the document, concluded that international pressure will not force North Korea to give up its nuclear weapons, estimated to be at least 20 warheads.

As a result, the Central Committee of the party directed its International Liaison Department, the organ in charge of communicating with foreign political parties, to inform Pyongyang of China's continued backing.

The head of the Liaison Department, Song Tao, visited Pyongyang Nov. 17 and met with senior North Korean officials. North Korean state media did not provide details of the talks, other than to say issues of mutual concern were discussed.

The directive appears written in response to the United Nations Security Council resolution passed after the Sept. 3 North Korean nuclear test. Included among the resolution's new sanctions are restrictions on oil and gas transfers, including a ban on transferring oil between ships in open ocean waters.

On the U.N. requirement to shut down oil and gas transfers from China to North Korea, the party document said after North Korean businesses in China will be closed under the terms of the latest U.N. resolution, "our country will not for the moment restrict Korea from entrusting qualified Chinese agencies from trade with Korea or conducting related trade activities via third countries (region)."

A directive ordered the Liaison Department to offer a promised increase in aid for "daily life and infrastructure building" and a one-time increase in funds for North Korea of 15 percent for 2018. Chinese aid will be then be increased annually from 2019 through 2023 by "no less than 10 percent over the previous year."

The Chinese also promised the North Koreans that in response to calls to suspend all banking business with North Korea that the financial ban will "only apply to state-owned banks controlled by the central government and some regional banks."

"Your department should at the same time seriously warn the Korean authority not to overdo things on the nuclear issue," the document says.

"Currently, there is no issue for our country to forcefully ask Korea to immediately and completely give up its nuclear weapons. Instead, we ask Korea to maintain restraint and after some years when the conditions are ripe, to apply gradual reforms and eventually meet the requirement of denuclearization on the Korean Peninsula."

The document then directs the Liaison Department to warn that if North Korea insists on acting rashly, further punitive measures will be imposed on senior North Korean leaders and their family members.

The directive lists "requirements" for the Liaison Department to pursue, including informing the North Koreans of China's "determination to protect the Korean government on behalf of the Central Committee of CPC."

Liaison officials also were tasked with informing the North Koreans of promises of support and aid in exchange for Pyongyang making "substantial compromises on its nuclear issues."

"According to the current deployment of world forces and the geographic position of the Korean Peninsula, to prevent the collapse of the Korean government and the possible direct military confrontation with western hostile forces led by the United States on the Korean Peninsula caused by these issues, our country, Russia, and other countries will have to resort to all the effective measures such as diplomatic mediation and military diversion to firmly ensure the peace and stability on the Korean Peninsula and to prevent ‘chaos and war,' which is also the common position held firmly by our country, Russia, and others," the report says.

The document states that if the United States "rushes to war" against North Korea, the conflict would have a huge impact on the political and economic state of the region and the world.

"Also, our country, Russia, and others will absolutely not look on the chaotic situation on the Korean Peninsula without taking any action."

The document states that China believes that "theoretically" western powers will not use military force to overthrow the Kim Jong Un regime to solve the nuclear issue.

"However, international provocations by Korea via repeatedly conducting nuclear tests has imposed huge international pressure on our country that is continuously accumulating and becoming unbearably heavy," the document says.

The deal outlined in the document to be communicated to Pyongyang includes a "stern warning" combined with "related assurances to Korea at the same time."

"That is, currently Korea will not have to immediately give up its nuclear weapons, that so long as Korea promises not to continue conducting new nuclear tests and immediately puts those promises into action, our country will immediately increase economic, trade, and military assistance to Korea, and will add or continue providing the following benefits," the report states.

The first item then lists greatly increasing trade with North Korea to keep the government operating and to raise the living standard of North Koreans.

"As for products under international sanctions such as crude oil products (except for the related products clearly defined as related to nuclear tests), under the condition of fully ensuring domestic demand of Korea, we will only make a symbolic handling or punishment," the Party document said.

Past document leaks have included party documents on decision making related to the 1989 military crackdown on unarmed protesters in Beijing's Tiananmen Square published in the 2001 book The Tiananmen Paper.

A more recent disclosure in October was the release of an internal Communist Party document authorizing the Ministry of State Security, China's civilian spy service, to dispatch 27 intelligence officers to the United States to "crush hostile forces." That document was made public by exiled Chinese businessman-turned-dissident Guo Wengui.

Orville Schell, a China specialist who worked on the Tiananmen Papers, said he could not authenticate the document but said it has "an air of veracity."

"The language in Chinese is spot on party-speak, and the logic of the argument would appear to be congruent with the current line and what is happening," said Schell, director of the Center on U.S.-China Relations at the Asia Society in New York.

Columbia University Professor Andrew Nathan also could not authenticate the document but said it looks genuine. "The typeface, layout, header, seal, vocabulary, and diction are all those of an official inner party document," said Nathan who also worked on the Tiananmen papers.

Nathan said the document appeared to be a directive for International Liaison Department director Song Tao's mission to Pyongyang two months later, and Beijing's attempt to press North Korea to halt nuclear tests using a combination of incentives and warnings.

The Chinese language version uses some terms that reveal China's contempt for North Korea, such as the term "ruling authorities" for the Kim regime, something Nathan said is an "unfriendly" tone.

Tkacik said the document, may be "evidence that China has no real commitment to pressuring North Korea to give up nuclear weapons, and indeed sees North Korean nuclear arms as an additional strategic threat to the United States, one that China can claim no influence over."

"Reading between the lines, it is clear that China views North Korea as giving it leverage with the U.S., so long as the U.S.believes that China is doing all it can do," Tkacik said.

Former U.S. Ambassador to the United Nations John Bolton said if the document is authentic, "it reveals China's policy to be completely cynical and utterly detached from its publicly stated position."

"The White House would have to react accordingly," he added.

The party directive states that China regards North Korea as a strategic "buffer zone" needed to "fend off hostile western forces." Ideologically, North Korea also is important to China in promoting its vision of "socialism with Chinese characteristics led by our Party" and identifying North Korea as "irreplaceable."

According to the document, the Party regards the "continuity of the Korean government," maintaining peace on the Korean Peninsula and one of its unwavering goals.

"This issue is about the peace and stability of the Korean Peninsula and the fundamental interests of our Party, our country, and all Chinese people," the document concludes, adding that the department should quickly coordinate with the Foreign and Commerce Ministries and other agencies to develop an operational plan to implement the policy "to ensure the sense of responsibility, to strictly maintain related confidentiality, and to seriously accomplish the heavy tasks entrusted by the Central Committee of CPC."

The document bears the seal of the General Office of the Communist Party Central Committee, the office in charge of administrative affairs. Copies were sent to the administrative offices of the National People's Congress, State Council, and Central Military Commission.

The internal document states that the new policy toward the North Korean nuclear issue is based on consultations among key power organs within the ruling party, including the Central Committee and State Council, along with what was termed "the guiding spirit" of meetings held by the National Security Commission, headed by Chinese leader Xi Jinping.

"After research and assessment, the Central Committee of the Communist Party of China decided to authorize your department to lead and organize the communication and coordination work with the Korean administration on its nuclear issues," the document states.

PROGRAM NOTE: This will be a major part of my weekly talk-radio show on WBCQ on Wednesday, January 3 from 9-11 PM eastern US time (GMT -0500). You can tune-in at 7490-AM international shortwave or live on the Internet right here at HalTurnerRadioShow.com