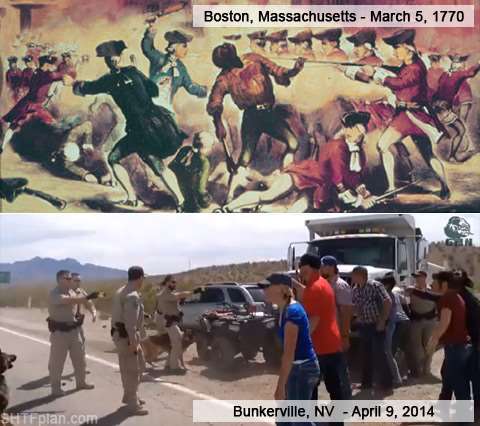 Update: Word on the street from sources close to the militia movement is that up to 5,000 armed militia members will be arriving in Bunkerville, Nevada sometime today. (See full report below)

SHTFplan.com Editor’s Note: It is apparent that the Federal government was under the impression that they could simply move into the ranch land surrounding Bunkerville, NV and have their way with the property and livelihood of the Bundy family. What they didn’t count on was the outcry from Americans across the country. And now things may be headed to the next level. As Kim Paxton of The Daily Sheeple notes, citizen militias in several states have been called up. Many members of those organizations are taking up arms and are making their way to Nevada.

And it’s not just the citizen militias that are preparing to take action. The governor of Nevada has officially condemned the federal government’s actions, though he has yet to take any steps afforded to him under State law. Sheriff Richard Mack of Gilbert, Arizona has weighed in and calls the actions “terrorism.”

At last count there were some 200 federal agents from various agencies on the ground in Nevada and it appears that hundreds, perhaps thousands, of armed militia members will soon arrive to confront them.

The Federal government will no doubt step up their efforts, as they are facing the possibility of a widespread rebellion resulting from their actions against a private citizen whose only “crime” was to graze his cattle on the land his family has used for this purpose for over a century. It would not be at all surprising to see the President of the United States call up National Guard troops and more militarized law enforcement officials for fear of having this spiral out of control. A declaration of martial law to go along with already established First Amendment Areas is not out of the question.

We may well be on the cusp of a serious stand-off involving thousands of people. Keep in mind that most of them will be armed.

Given the circumstances, things could turn very bloody very quickly.

An area just outside of the little town of Bunkerville, Nevada, with a population of around a thousand people, may go down in history.  This little spot in the desert may be compared with Lexington, Massachusetts, the site of the “shot heard round the world” – the first shot fired in the American Revolution.  Because it looks like the second American Revolution may start there…and soon.

Yesterday, The Daily Sheeple reported that tensions were running high outside of Bunkerville. It seems that the US government, in all of their infinite wisdom, has declared war on a cattle rancher named Cliven Bundy.

In a stand-off that has been likened to Ruby Ridge and Waco, the federal government has now deployed armed agents in a case of what the U.S. Department of the Interior’s Bureau of Land Management (BLM) has deemed “trespass cattle,” escalating a 20-year battle over grazing rights and what actually constitutes “public land” use in Southern Nevada.

Cliven Bundy, a 67-year-old rancher says his family has worked the 600,000-acre Gold Butte area since the late 1800s and that they were there well before the government’s Land Management Bureau ever came along. (source)

Armed federal officers have arrived to steal Bundy’s cattle and close down the land he is using.  What’s more, they have declared a zone around the area to be free of the restrictions of the Constitution, specifically, the First Amendment right to assemble and speak freely. They’d like to keep their reprehensible actions quiet and out of the public eye. It’s really difficult to mow down a bunch of protesters ala Waco with the whole world watching.

Yesterday, tensions began to rise even further and numerous protestors were tazed and assaulted.  (You can see the actions of those brave BLM officers on this video HERE).

It looks like tensions will rise even further because Americans have had enough.

Militias have been mobilised. It’s going to get real.

Bundy may be facing down a bunch of armed federal thugs but he’s going to be backed up by militia members from across the country.

This is the day that Patriots have been talking about and training for. They will not stand down.

CBS reports that militias from Texas, Montana, Utah, New Hampshire, and Florida will be standing with Bundy against the Bureau of Land Management.

If you aren’t a combatant, this doesn’t mean that you can’t participate in this revolt against tyranny.  This is a call to action.

Here are the pertinent email addresses and phone numbers:

Share information in support of these people who refuse to stand idly by while theft, violence, and tyranny occurs at the hands of the government.  If we all spread the word, there is no way that another Ruby Ridge or Waco can quietly occur. We can combat the

disinformation spouted by the mainstream media by publishing REAL photos, REAL videos, and REAL accounts of what is happening. We can keep the communication open and tell the world what the United States government is doing to its own people.

Share this and other stories through email, through social media, through links in the comments sections of mainstream news sites.  Whatever you do, don’t wait for someone else to take action. Now is the time to speak up for liberty.  Make this story too viral for the mainstream to ignore.  Do not allow these brave people staring down the barrel of a gun to do so without our support.

The Bureau of Land Management has picked up a snake by the tail, and it looks like that snake is going to bite.