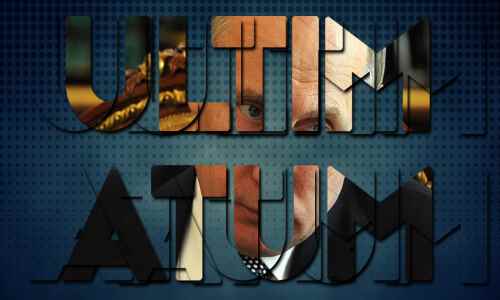 Putin Issued an Ultimatum to the United States

FEARS are growing that a nuclear war might be about to break out that could destroy all life on the planet. Relations between Russia and Western countries like Britain, the US and France have taken a turn for the worse.Is the world in real danger of an all-out war between nuclear armed nations that could destroy the planet?

With the rival blocks facing off over Ukraine and now Syria, it seems like the world is set for a return to the Cold War era. And some think it could go even further, triggering an all-out war between the nuclear armed nations.

And both governments are now ramping up the rhetoric. US secretary of defence Ash Carter aid the Pentagon was reviewing its “nuclear playbook” – investing in improving the country’s atomic arsenal to ensure against “terrible attacks” by Moscow.

READ MORE : Massive Cyberattack Hits America – Will Russia Take Down The Entire Internet If We Go To War?

Vladimir Putin asked the US to remove from Eastern Europe and from the territory of new NATO members in the Balkans and the Baltics (Bulgaria, Romania, Ukraine, Lithuania, Latvia, Estonia, Poland) defense infrastructure and its troops stationed there in recent years; insists be lifted sanctions Washington and be paid compensation for damage caused by them.

Russian President Vladimir Putin ordered the termination of the agreement with the US for processing plutonium for hostile action by Washington against Russia and set several conditions for renewal – first "reduction of military infrastructure and size of the contingent US troops located in countries NATO become members after September 1, 2000, to the level at which they were present the day of entering into force of this agreement. "

"In relation to radically change of circumstances arises threat to strategic stability as a result of hostile actions of the United States of America to the Russian Federation and the inability of the US to ensure the implementation of commitments in the processing of excess plutonium for weapons purposes in accordance with international contracts ", is stated in the official document, which terminated the agreement.

Agreement with the US was signed on August 29, 2000 and applies to the processing of excess plutonium for weapons purposes in Russia and the USA. Each party must move to eliminate plutonium totaling 34 tons.

Sergey Lavrov said that Moscow with its decision sends a signal to Washington that will not achieve anything by talking with Russia from a position of strength, sanctions and ultimatums.This is a forced measure, but not abdicate their responsibilities for nuclear disarmament complemented Russian Foreign Minister position, published on the website of the Ministry.

Vladimir Putin terminate the agreement with the US to dispose of plutonium from nuclear warheads and told Reuters . This is another indication of the deteriorating relations between Washington and Moscow , the agency notes. The deal was terminated because of "the resultant threat to strategic stability and as a result of hostilities United States to the Russian Federation," noted the decree. US proved unable to fulfill their obligations to the contract.

The occasion is to terminate processing of plutonium is disagreement Moscow that used by Americans method . The agreement is nuclear material to process irreversible. Since 2010, the US stopped processing "irreversible" and have gone only to the digging of the material, enabling them to uncontrolled production of nuclear munitions.

The draft law to stop the agreement from September 2000 said that it will be renewed by decision of President Vladimir Putin, who is also an importer of this text .But first the US must "remove the causes that led to" fundamental change of circumstances. "

Moscow requires a "denial of hostile policy towards the Russian Federation through":

– Repeal of the Law "Magnitsky" from 2012, by which a confidential list is banned from the United States dozens of officials deemed responsible for the death in prison of Sergei Magnitsky.

– Repeal of targeted against Russia provisions in the Act of 2014 to support freedom in Ukraine.

– Remove all sanctions introduced by the United States to natural and legal persons from Russia.

– Compensation for damage caused by the Russian Federation as a result of imposed sanctions, including caused by the (Russian) kontrasanktsii.

The bill says: "The crisis in Ukraine is used as a pretext for increasing the US military presence in Eastern Europe. In 2015, there were created 6 export control stations troops to Bulgaria, Romania, Latvia, Lithuania, Estonia and Poland. their main task is to provide operational transfer of large military forces of NATO in Eastern Europe. Divisions of the US forces entered the territory of the Baltic countries increased the number of airports based on their NATO aircraft. On the territory of Ukraine instructors US conduct training of fighters from Russia banned organization "Right sector".

ORDER TO REACH AND INFORM AS MANY PEOPLE IN THE WORLD AS POSSIBLE WITH THE TRUTH. WE REPORT YOU DECIDE WHAT TO DO WITH THE INFORMATION AND PLEASE TAKE NOTICE AND READ.