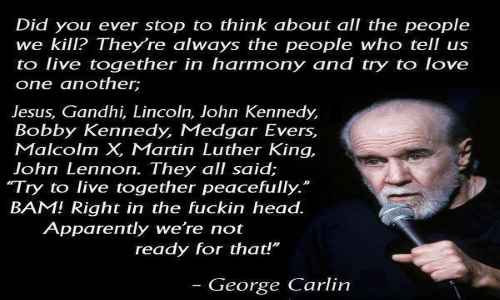 Be happy with what you got. Because the owners of this country don’t want that. I’m talking about real owners now. The real owners. The big wealthy business interests that control things and make all the important decisions. Forget the politicians! Politicians are put there to give you the idea that you have a freedom of choice. You don’t! You have no choice. You have have owners. They own you. They own everything. They own all the important land. They own and control the corporations… they’ve long since bought and paid for the senate, the congress, the state houses, the city halls; they got the judges in their back pockets, and they own all the big media companies so that they control just about all the news and information you get to hear.

They got you by the balls! They spend billions of dollars every year! Lobbying to get what they want! Well we know what they want. They want more for themselves, and less for everybody else. But I’ll tell you what they don’t want. They don’t want a population of citizens, capable of critical thinking. They don’t want well informed, well educated people, capable of critical thinking. They’re not interested in that, that doesn’t help them… That’s against their interests! You know what they want? They want obedient workers! Obedient… Workers! People who are just smart enough to run the machines and do the paperwork. And just dumb enough to passively accept all these increasingly shittier jobs, with the lower pay, the longer hours, the reduced benefits, the end of overtime, and the vanishing pension that and the vanishing pension that you go to collect it. And now they want your social secutiry money.

They want your f*cking retirement money, they want it back! So they can give it to their criminal friends on Wall Street. And you know something they’ll get it, they’ll get it all from you sooner or later. Because they own this f*cking place! It’s a big club… and you ain’t in it! You and I, are not in the big club! By the way, it’s the same big club they used to beat you over the head with, all day long when they tell you what to believe. All day long, beating you over the head in their media telling you what to believe, what to think… And what to buy. The table is tilted folks. The game is rigged. Nobody seems to notice, nobody seems to care. Good, honest, hard-working people continue to elect these rich these rich c*cksuckers who don’t give a f*ck about them. It’s called the American dream, because you have to be asleep to believe it. Human beings are nothing more than ordinary jungle beasts… Savages. No different from the Cro Magnon people who lived twenty five thousand years ago in the plasticine forest eating crubs off rotten logs.

No different. Our DNA hasn’t changed substantially in a hundred thousand years. We’re still operating out of the lower brain. The reptilian brain. Fight or flight. Kill or be killed. Now… We like to think we’ve evolved and advanced because we can build a computer, fly an airplane, travel under water… We can write a sonet, paint a painting, compose an opera, but you know something? We’re barely out of the f*cking jungle! Barely out of the f*cking jungle. What we are, is semi civilised beasts, with baseball caps and automatic weapons. It just seems to me, that only a low IQ population could have taken this beautiful continent… This magnificent American landscape that we inherited… Well actually, we stole it from the Mexicans and the Indians, but hey, it was nice when we stole it. Only a nation of unenlightened half-wits could have taken this beautiful place and turn it into what it is today… A shopping mall. Mile after mile, of mall after mall. Many, many malls, major malls, and mini malls. They put the mini malls in between the mini marts. :Speaker: George Carlin