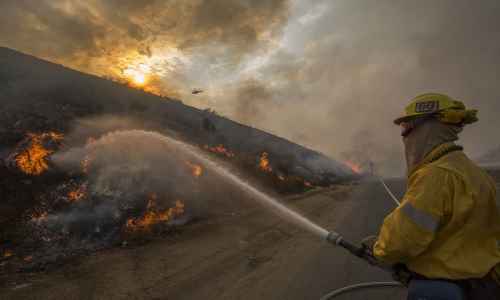 It’s critical to understand the global context that has been painstakingly fabricated by the NWO globalist cabal. They have created a worldwide enterprise that employs a cadre of geoengineers who are capable of manufacturing any weather pattern they so desire. These newly predominant weather patterns, then, are used to provide cover for manufactured catastrophic weather events and/or destructive climate trends.

Other rain-inducing techniques include rain rockets, popular in China, where rocket launchers fire particles into clouds to encourage rainfall (important for crops) and Thailand’s Bureau of Royal Rainmaking has a number of cloud seeding methods, aimed at clouds of different types — relieving drought was the impetus for the program, which they now license out. “The operation is expected to ease the side impact of climate change suffered by the country,” they said in a press release.

The government has the technology to make rain, so why don’t they rain on the California fires? The Answer Is because they want to burn people out of their homes, rezone their neighborhoods so they cannot rebuild; and the government comes in and grabs the land!

Because there’s really no other way out of their unsustainable predicaments. Only by triggering a full-blown World War III scenario can they continue to exist, and even flourish. Truly, the New World Order globalist cabal now finds itself in an untenable situation as it grows more desperate by the day.
The single most unsustainable aspect of their house of cards is the ever-collapsing Global Economic & Financial System (GE&FS). Who does not recognize this multi-decade racket as a global gambling casino where the house always wins? When all major institutional investors are forced to play the game to maintain the appearance of a fair marketplace, it was only a matter of time before this massive Pyramid-Ponzi scheme was exposed.

What is not well known is that the creators of the current Global Economic & Financial System knew that it would come to this. That the cracks in the pyramid would become too large to hide. Most importantly, the crushing amount of management necessary to maintain the GE&FS mirage has simply become overwhelming. The banksters can’t do it anymore and everybody knows it.
Then there is the rapidly deteriorating state of international affairs (manufactured via incessant false flag operations) that stands as a testament to the ongoing and engineered clash of civilizations. The domestic affairs of many nations are also in the state of permanent disarray by purposeful design .

All of these apocalyptic events point to the inevitable demise of the present world empire. Each one represents a colossal convulsion that reflects an empire in its death throes. The current Zio-Anglo-American Axis that administers this empire is being exposed mostly by exposing itself. The whole world is now witness to the outrageous crimes constantly committed by politicos and power-brokers in Washington, D.C..

For more than a century these globalists have been promoting their NWO eugenics plan for a sustainable earth population of about a half billion people. The UN Agenda 21 spells it all out in graphic detail. This means within the next several years they plan to kill 13 out of 14 of us 7.2 billion people currently living and breathing on this planet. For decades they’ve been busily deploying both slower, “soft kill” methods as well as their faster, “hard kill” methods to drastically reduce the world population. The hard kill scenario manifests through war and both manmade induced natural disasters as well as naturally occurring natural disasters with a recent noticeable crescendo of activity of all these cataclysmic events.

2018 already is shaping up to be epic in both so called natural disasters through increased waves and magnitudes of earthquakes, tsunamis, volcanic eruptions and extreme weather events like hurricanes, tornados, floods, fires, blizzards, and droughts. Under black ops authority, the US military has been involved extensively in geoengineering,weather modification and climate control, playing an enormous, mostly hidden factor in all of these so called natural disasters. The HAARP technology using high frequency electromagnetic beams and electromagnetic pulse (EMP) technology are simply the latest US military weapons at their diabolical disposal.

We’re even learning that natural catastrophes are not so natural after all since these destructive human forces have increasingly been causing them, also making them more devastating and extreme as well as giving rise to their mounting frequency. The deadly earthquake and tsunami believed responsible for causing Japan’s 2011 Fukushima nuclear power plant disaster actually appears to be of manmade origin through EMP technology. Between these monumental events and increasing geopolitical conflicts manifesting though skyrocketing global violence and increasing hotspot wars (Syria, Yemen, Iraq, Afghanistan, Libya, Gaza, Ukraine) may or may not trigger nuclear detonations that will virtually end all planetary life. But very likely in the coming apocalyptic crises and tumultuous upheaval caused by human conflict and “natural” disaster, millions if not billions on earth could perish within the next few years. These are the hard kill tactics that the globalists are counting on to rapidly depopulate our only planet.

The most significant drop in a single nation will be the United States from its current 2014 number of near 319 million to just under 65 million by 2025. In other words, ho earnings of the armament industry maintains that 78% of us Americans will either be dead or living elsewhere on the planet within ten years. Likewise, all the Western nations are listed to also absorb heavy losses in their national populations. Interestingly, America’s neighbor to the north Canada is expected to only reduce its population a little more than ten million to just over 24 and a half million people.

Get ready to give your family a hug because these are frightening signs that the end of the world is near. We all have heard people on television or all the streets talk about the end of days or signs of the end times, but this list isn’t about superstition or a long ago prophecy. We are seriously looking down the barrel at some very dangerous things that could end the world whether we are ready or not.