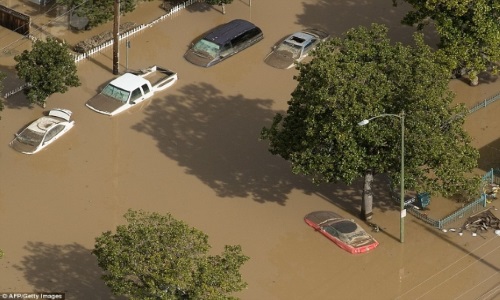 Entire San Jose neighborhoods were submerged by water on Wednesday during the worst floods for 100 years.

50,000 people were told to flee their homes after evacuation warnings were issued in the early hours of the morning. Most were issued a flood warning but for 14,000 the order was mandatory.

The flooding began when Coyote Creek, which runs through Silicon Valley from the San Francisco Bay, burst its banks on Tuesday night. It sent dirty water pouring in to the towns below it at frightening pace.

On Wednesday, residents complained that the alert had not been sent out fast enough. Some said their first warning came when they saw neighbors being rescued from their drowning homes by firefighters in dinghies. 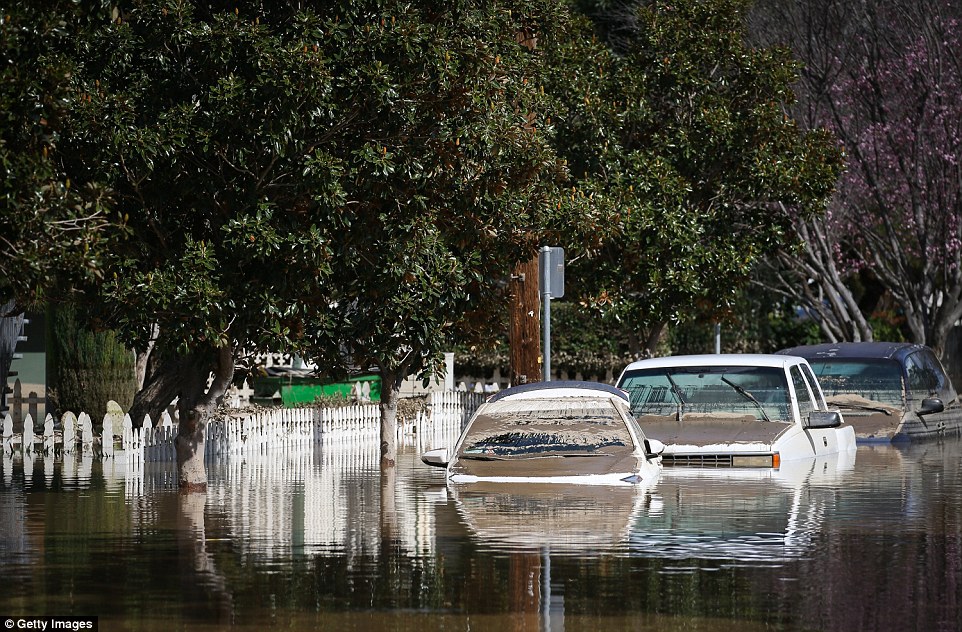 Mayor Sam Liccardo labeled the city's response to the emergency situation a 'failure'.

'If the first time a resident is aware that they need to get out of their home is when they see a firefighter in a boat, that's a failure. We are assessing what happened in that failure.'

Residents have been warned not to go into the water which was likely contaminated by sewage.

'People should take every precaution to stay away from the water to avoid illness or injury,' Sara Cody, Santa Clara County Health Officer said.

California has been battered by winter storms for weeks after one of the wettest seasons on record. The most recent problems were brought by an 'atmospheric river' – the name given to a sudden and severe horizontal moving patch of weather.

The entire state has recorded higher than average rainfall, bringing an abrupt end to its five-year drought and sparking emergency situations all over.

In Southern California, flash flood warnings and wind advisories were issued last week as up to six inches of rain hammered Los Angeles and surrounding areas.

Further north, the Oroville Dam threatened collapse after its reservoir rose to capacity for the first time ever. 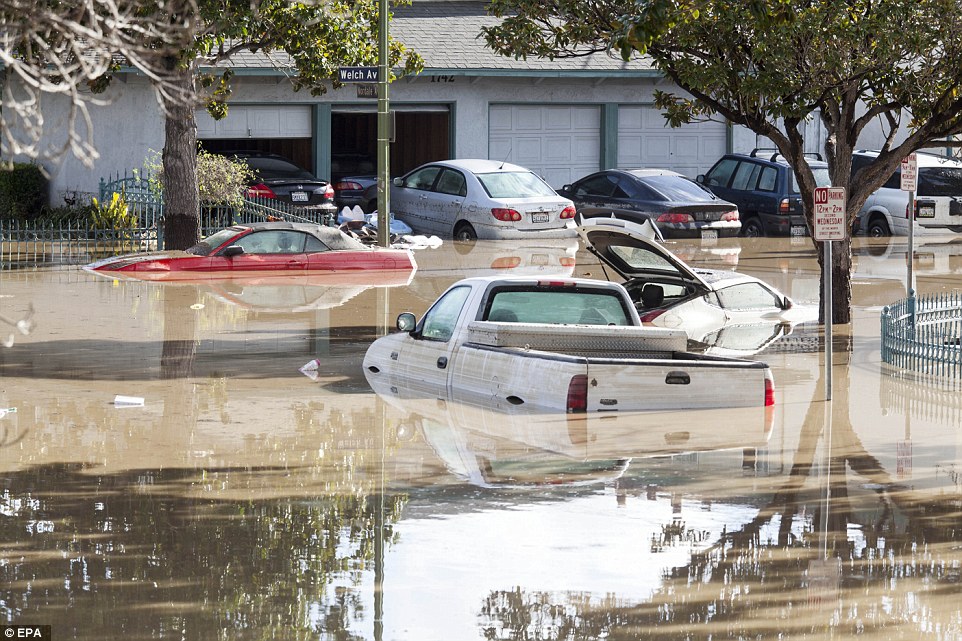 Engineers have been battling the punishing weather to try to fix the crumbling spillways which nearly gave way to the lake for days.

San Jose's state of emergency was brought on suddenly late on Tuesday night. Water agencies have admitted they did not expect so much water to move downstream on Coyote Creek so quickly.

Residents who had signed up for emergency alerts received them and warnings were issued over social media but first responders eventually resorted to going door-to-door to get people out of the danger zone.

'It was scary,' said Irma Gonzalez, 59, whose two-story apartment complex is alongside the creek. She was awakened about 2:30 a.m. by police pounding on her door. 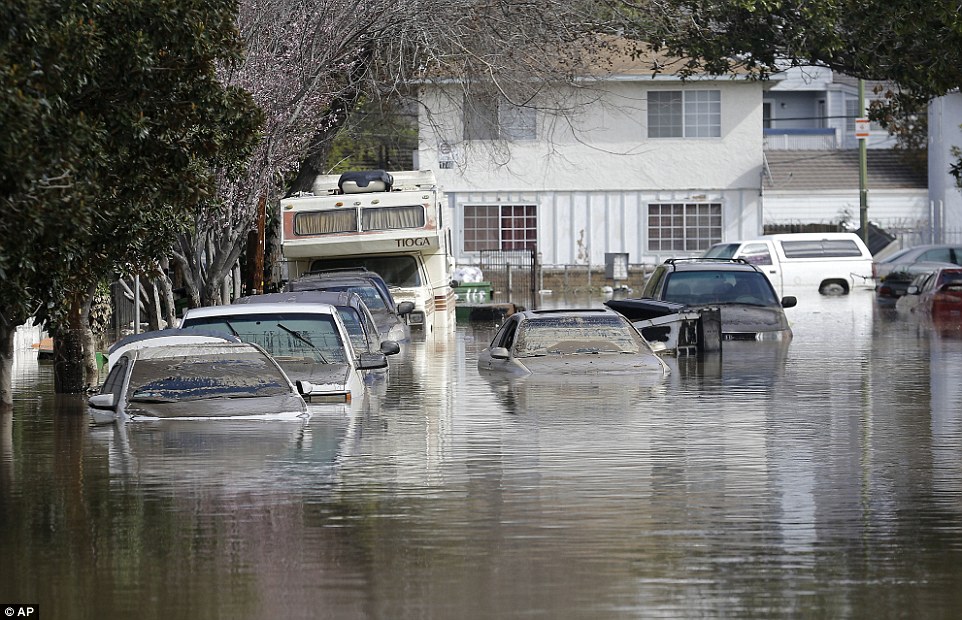 Resident Sandy Moll said she had prepared for about a foot of water, but the flooding spilled over sandbags stacked 3 feet high and broke down her back door. Moll told The Mercury News in San Jose she was angry at the lack of warning.

'I'm seething. It's the lack of information and forewarning when they had to have known. They never even said you need to prepare for a major flood.'

Bob Benjamin, a meteorologist with the National Weather Service, said the water level in Coyote Creek reached a 100-year high during this week's storm.

The floodwaters were receding Wednesday but the mayor said it would be at least another day before residents would be allowed to return home.

City officials did not believe the waters would spread to other neighborhoods and did not expand the evacuation orders. 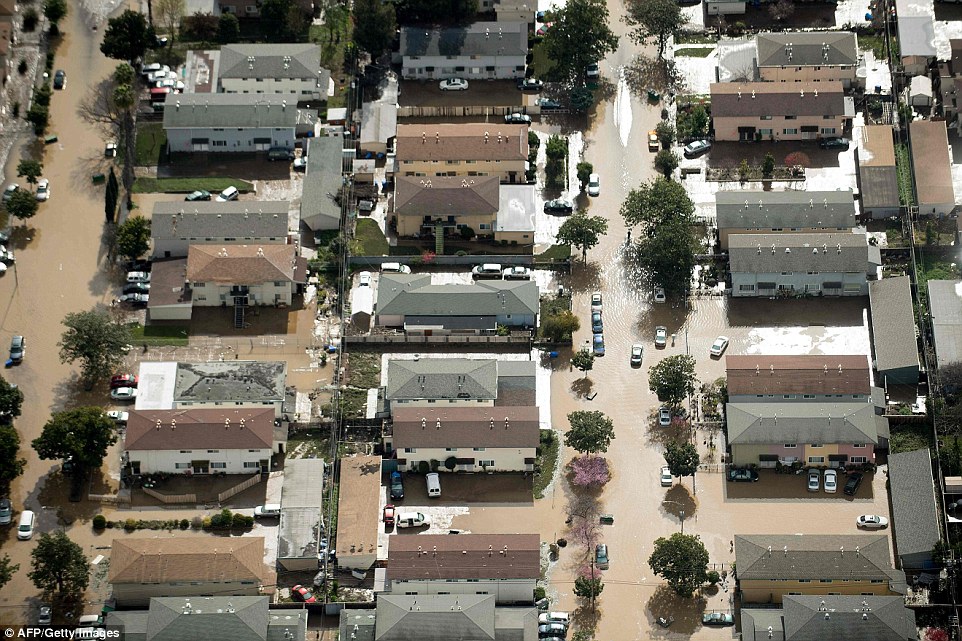 About 300 people stayed in emergency shelters set up by the city, while many found other accommodations. Coyote Creek flooded after Anderson Dam in Santa Clara County reached capacity during heavy weekend rains.

'We've been pummeled by a number of storms since Jan. 9.

'We've been letting out as much water as we possibly could,' said Rachel Gibson, a spokeswoman for the Santa Clara Valley Water Project, which operates the dam.

Managers of the Anderson Dam were taking advantage of a break in the storms to draw down the reservoir, which is supposed to be limited to 68 percent of capacity because of earthquake concerns but is now at 100 percent, said Jim Fiedler, a chief operating officer at the Santa Clara Valley Water District.

He said it could take nine weeks to bring it down to normal levels. Inspectors in 2010 discovered the dam is vulnerable to a major quake and $400 million is being spent to make it earthquake-proof by 2024.

Flood warnings were in place until Saturday because waterways were overtaxed. Another storm was forecast Sunday.

The rains have saturated the once-drought-stricken region and wreaked havoc for residents. At least four people have died as a result of the storms throughout the state in the past week.

San Jose resident Daniel Martinez said he didn't think twice about what to do when police knocked on his door at 1 a.m. to warn of a flood.

'We decided to leave just to be safe not sorry,' said Martinez, a 32-year-old yogurt shop manager. He woke up his daughter, grabbed his diabetes medicine and hustled to an emergency center at a nearby high school. By Wednesday morning, he hadn't slept a wink but was trying to stay positive.

'Can't dread on it, you know. Keep your spirits up and hope for the best,' Martinez said.