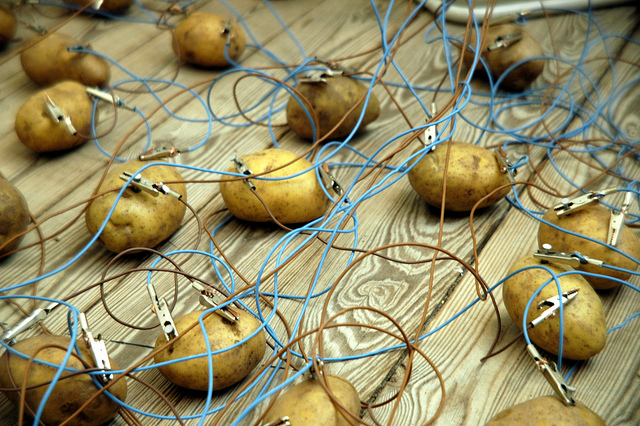 As one of the most ubiquitous crops in the world, the potato is poised to feed the entire world.  Along the way, scientists discovered that the popular staple of many people’s diets may also have potential to help power it as well.

A couple years ago, researchers at the Hebrew University of Jerusalem released their finding that a potato boiled for eight minutes can make for a battery that produces ten times the power of a raw one. Using small units comprised of a quarter-slice of potato sandwiched between a copper cathode and a zinc anode that’s connected by a wire, agricultural science professor Haim Rabinowitch and his team wanted to prove that a system that can be used to provide rooms with LED-powered lighting for as long as 40 days. At around one-tenth the cost of a typical AA battery, a potato could supply power for cell phone and other personal electronics in poor, underdeveloped and remote regions without access to a power grid.

To be clear, the potato is not, in and of itself, an energy source. What the potato does is simply help conduct electricity by acting as what’s called a salt-bridge between the the two metals, allowing the electron current to move freely across the wire to create electricity. Numerous fruits rich in electrolytes like bananas and strawberries can also form this chemical reaction. They’re basically nature’s version of battery acid.

“Potatoes were chosen because of their availability all over including the tropics and sub-tropics,” Rabinowitch told the Science and Development Network. They are the world’s fourth most abundant food crop.”

But besides being rich in phosphoric acid, spuds are ideal in that they’re composed of sturdy starch tissue, can be stored for months and won’t attract insects the way, say strawberries, would. Additionally, boiling the potato breaks down the resistance inherent in the dense flesh so that electrons can flow more freely, which significantly bumps up the overall electrical output. Cutting the potato up into four or five pieces, they researchers found, made it even more efficient.

The potato battery kit, which includes two metal electrodes and alligator clips, is easy to assemble and, some parts, such as the zinc cathode, can be inexpensively replaced. The finished device Rabinowitch came up with is designed so that a new boiled potato slice can be inserted in between the electrodes after the potato runs out of juice. Alligator clips that transport the current carrying wires are attached to the electrodes and the negative and positive input points of the light bulb. Compared to kerosene lamps used in many developing parts of the world, the system can provide equivalent lighting at one-sixth the cost; it’s estimated to be somewhere around $9 per kilowatt hour and a D cell battery, for another point of comparison, can run as much as $84 per kilowatt hour.

Despite the advantages, a recent BBC report that followed up on the group’s initial discovery found that the group has since been beset with a number of extenuating circumstances that have hindered their efforts to scale up their idea to places like villages in off-the-grid parts in Africa and India. Economically speaking, food-based energy systems can only be viable as long as they don’t eat into the needed food supply and that such enterprises don’t compete with farmers who grow them for market. The technology is also having a difficult time establishing a niche among more fashionable forms of alternative energy like solar and wind power, where infrastructure and investment seems to be headed mostly. Thus far, no commercial investors or non-profit organization has stepped up to help expand or distribute any of the prototypes Rabinowitch has developed.

To really make an impact, perhaps the potato needs to stop being so humble. 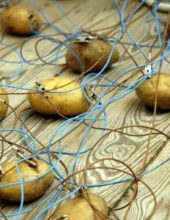 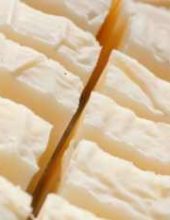 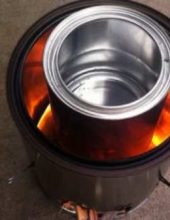 Make Your Own Hobo Stove From Scrap 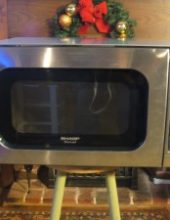 Converting A Microwave Oven Into An EMP Resistant Enclosure