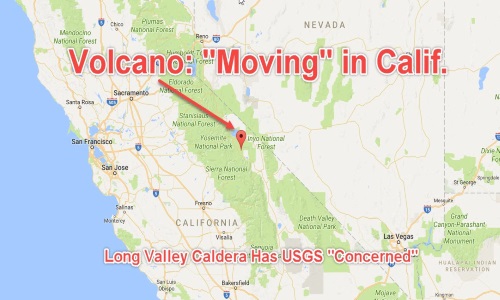 When people think of California, they may think of Earthquakes.  Most folks don't even know there are volcanoes there, but there are.  At least two:  Lassen Peak and the much larger Long Valley Caldera near Mammoth Lakes.

In 1915, Lassen Peak erupted and wrecked a huge portion of the state.  Over the last 100 days, the much larger Long Valley Caldera has begun acting-up.  And what it's doing has Geologists at the US Geological Survey "concerned."  The Caldera – the mouth of the Volcano – is . . . . moving.

According to scientific instruments monitored by the United States Geological Survey (USGS) the area in vicinity of the Long Valley caldera is deforming and moving rapidly compared to previous records. How sure are they? "95% (confidence interval), the (data) ensemble is significant"

The data is showing on a recent timespan that the amount of movement is causing STATISTICALLY SIGNIFICANT STRAIN in the rock in the area. This is not conspiracy-theorist conjecture or amateur geology antics, this is from the USGS itself.  Here's the actual data – if it looks to you like gobbledygook, you're not alone; scroll down for an understandable explanation:

The following exceed SNR 1.5 and at the 95% CI, the ensemble is significant
The time span is 31 out of 730 days To be significant at the 95% CI, counts need to exceed 20 Units in either mm/yr or nano-strain/yr

(Let me save you the trouble again, ALL the data in this second data set exceed 9 units; the ones in red, by a LOT)

The following exceed SNR 3.0 and at the 95% CI, the ensemble is significant. The time span is 31 out of 730 days. To be significant at the 95% CI, counts need to exceed 1 Units in either mm/yr or nano-strain/yr.

(I'll save you the trouble again, they ALL exceed 1 Unit; the ones in Red, by a LOT!)

The following exceed SNR 4.0 and at the 95% CI, the ensemble is significant. The time span is 31 out of 730 days. To be significant at the 95% CI, counts need to exceed 0 Units in either mm/yr or nano-strain/yr.

OK, so what does this mean?  Well, judging by the deformation directions and rates: the magma plume is subsiding over the previous caldera and rising just south of it, where earthquakes are swarming now. The entire thing is tilting away from the mountains, with the northern edge of the old caldera sinking and the southern edge moving north, as if pushed by some force in the swarm region.

Here's how the USGS puts it:

Increased volcanic unrest (including earthquake swarms, ground deformation, and CO2 gas emissions) in the Long Valley area since 1980 increases the chance of an eruption occurring in the near future, but scientists still lack adequate data to reliably calculate by how much. Volcanic unrest in some other large volcanic systems has persisted for decades or even centuries without leading to an eruption. But since volcanic unrest can escalate to an eruption quickly–in a few weeks, days, or less–USGS scientists are monitoring the activity closely.

For those of you who might not quite comprehend this, let me put it another way:

Out of nowhere, the mountain started moving several times faster than it's ever moved before, in a direction it isn't supposed to be moving, while shaking like a leaf and belching poison gas.

There, that should be clear enough for just about anyone!

The USGS has also issued a status statement about the volcano which reads as follows:

OK, so there's ground deformation, Carbon Monoxide Gas and some earthquakes.  We all know earthquakes are a pretty reliable indicator of a pending eruption. How many earthquakes have there been and how big were they?  Glad you asked!

Here's the report.  Notice in the DEPTH column that very many of the "earthquakes" are happening at a NEGATIVE Depth; that means above the ground . . . you know, in the volcano itself that rises 8,530 feet above the ground, and so some of the earthquakes are higher than ground level!  " The above-ground, in-the-volcano quakes, are highlighted in either Yellow (less than 2 km above ground) or in RED, more than 2 km above ground.

What causes "earthquakes" inside a volcano higher than ground level?????   LAVA!  Moving upward.

Here's what they look like on an earthquake map from the USGS: 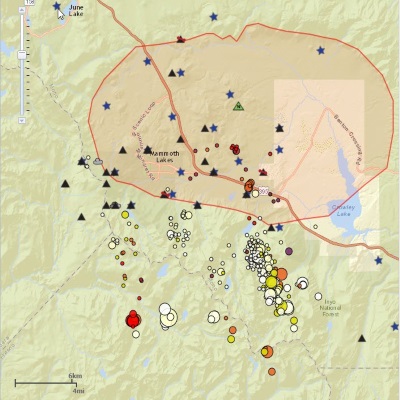 Do I have your attention now?  Good.  Because let me tell you exactly what an eruption of the Long Valley Caldera could mean.

According to the USGS, this volcano last erupted between 17,000 and 16,000 years ago. Prior to that, they know it also erupted 760,000 years ago because they tracked the volcanic ash deposits . . . and found they covered the area shown in green on the map below: Of course, the USGS could be correct; perhaps all this activity, earthquakes, ground deformation at a rate they've never seen before, the whole mountain moving in a direction it's not supposed to move in, and belching of toxic gas . . .  might all mean . . . . nothing.

I just figured the good folks of California, Nevada and other nearby states might want to know what the facts are and decide for themselves if all this spectacularly unusual stuff means nothing.

You see, if there actually is a big eruption, those big flows of gray colored ash that careen down the mountain (called PyroClastic Flows) move at about five-hundred miles an hour . . . . so all the movies you've seen where people outrun it in a car . . . . not true.

Oh, and the temperature of those gray, billowing clouds of ash:  EIGHT HUNDRED DEGREES. 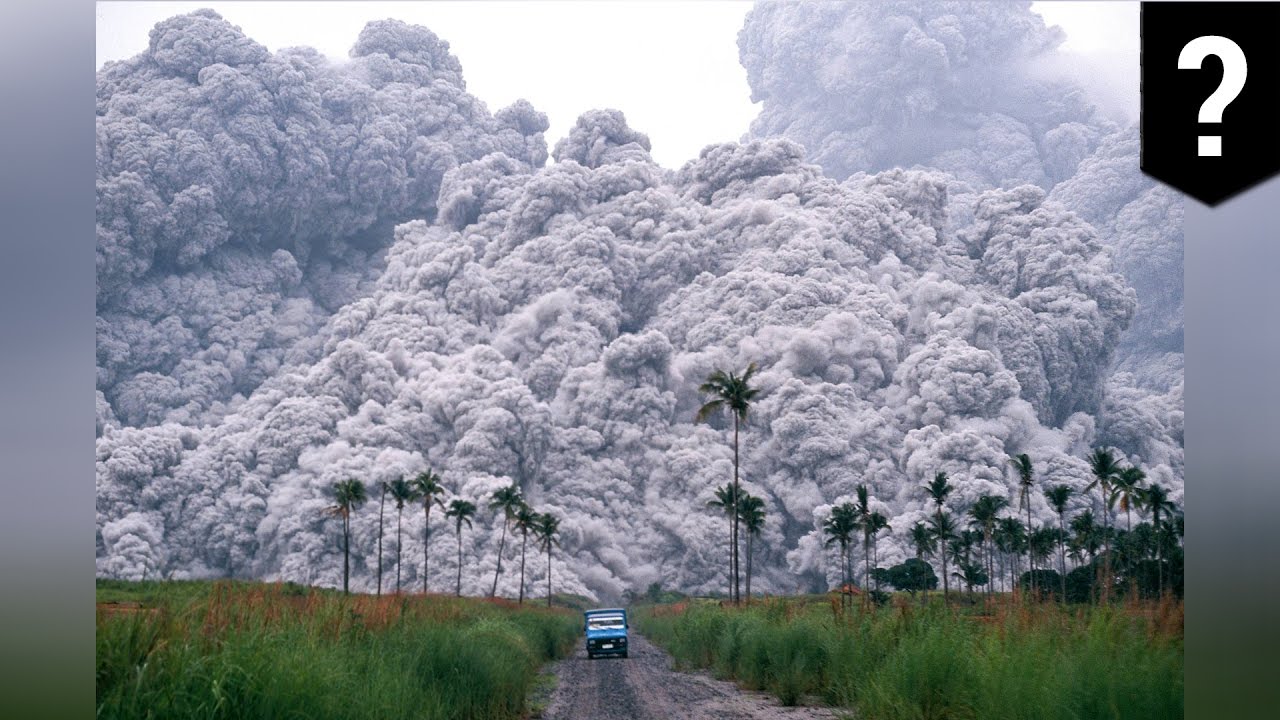 And for those in the green colored area above, you should be aware that volcanic ash is not actually "ash."  It is pulverized rock. It will stall your car by clogging the air intake, and if you get out of your car to see why it stalled  — and you breathe in a few good whiffs of the "ash" —  it turns to mud-like sludge inside your lungs.  A few good whiffs, and you end up suffocating on sludge.  There's no treatment and no cure.

More Quakes and Getting Stronger

In the hours spent researching and writing this article, the USGS has begun reporting even MORE earthquakes, and they're getting stronger: 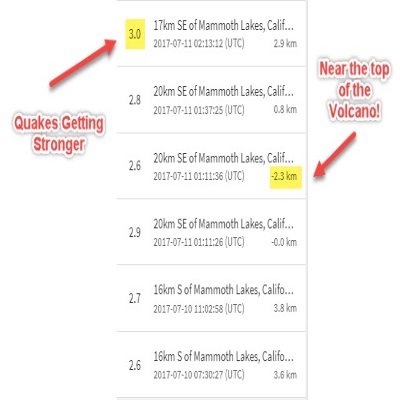 I certainly hope the folks in California, Nevada, Arizona, New Mexico, Colorado and Utah have evacuation plans, filter masks to wear and emergency food/water. The way the Long Valley Volcano is acting, you all might need those things soon.

READ MORE : HOW TO MAKE A GAS MASK: BASIC PRINCIPLES AND METHODS (DIY Items Which can Potentially Save Your Life in Case of a Disaster) 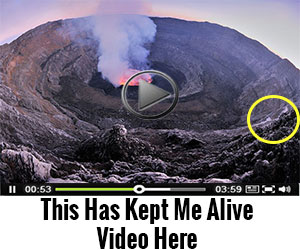 Impact of an Eruption of the Super Volcano

If Yellowstone really blew its top, scientists estimate that much of the United States and western Canada would be uninhabitable. Lava, poisonous gases, and a potential ten-foot layer of ash would cover the ground up to 1,000 miles away. Living in much of North America would become unbearable.

The eruption would drastically affect climates in various parts of the world, just like after the 1816 eruption of Mt. Tambora in Indonesia. This eruption was the main cause of crop failures throughout the northeastern U.S. and much of Europe. 1816 became known as the miserable “year without a summer.” Sheep and migratory birds died of the cold—in June.

Although scientists predict that the Yellowstone Volcano will not erupt for at least another 60,000 years, realizing that events like volcanic eruptions can cause food shortages suggests that it’s important to prepare before an emergency hits. Since disasters are unpredictable, we encourage building a supply now.

In addition to storing food, having an emergency kit would give you an edge on survival if any natural disaster or emergency happens in your area and you need to evacuate. If you’re not sure of potential dangers that may exist where you live, do a little research so that you can be as prepared as possible for any event.

Beforehand a Supervolcano Erupts, You Should Have


Extra dust masks.
Goggles (to protect your eyes from ash).

Non-perishable food to last several days or even weeks.

Wood for a fireplace or stove.

Extra-large (wide and long), heavy duty tarps for covering your home and vehicles from ash coming down.

Cash (forget credit cards and ATM’s in this situation)

Two-way radios with extra batteries (don’t depend on cell phone networks working for very long during a time of catastrophic disaster).

Plans and maps for evacuation to a distant region of the country or even to the Southern Hemisphere. An eruption of the Yellowstone Supervolcano is a major event and a vast amount of people in North America are likely to die. Surviving such an extreme event calls for extreme steps — such as journeying by foot, horse, or boat to lands in the Southern Hemisphere which scientists say will be least effected by an eruption of this magnitude.

Boat moored on the coast with extra fuel (not everyone owns a boat, but if you live near the East or West Coast a boat fully stocked with supplies can help you get several miles away and out of immediate danger).