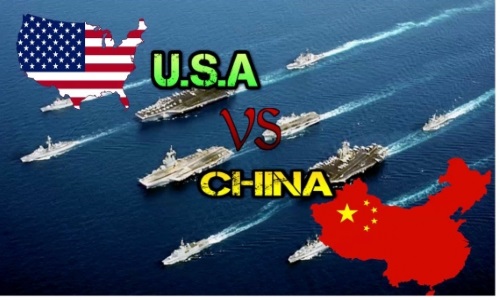 China, Tanks on the Move inside U.S., War

Within HOURS of Secretary of State Rex Tillerson's meeting with China, NUMEROUS full train loads of tanks, Bradley fighting vehicles, and other armor began moving out of key military facilities inside the United States.  In addition, a flurry of activity has begun at Naval shipyards to "surge" the ongoing refit, repairs and upgrades to two U.S. aircraft Carriers.

Video of one such weapons train, moving through Arizona on Monday, appears below:

This video explains the steps one should take to prepare for the potential of an war attack. A great beginner’s guide for what you can do.

While press reports put the best "face"  on Secretary Tillerson's meeting with China, skuttlebutt in the Pentagon claims it was "an unmitigated disaster."

China allegedly demanded the US immediately withdraw all its naval forces from the South China Sea and Tillerson flatly refused. The Chinese also allegedly told Tillerson that China has no way to stop North Korea from continuing to develop nuclear weapons and test missiles, to which Tillerson allegedly replied "don't piss on my leg and try to tell me it's raining."  Offended, China allegedly abruptly recessed the meeting.

Shortly thereafter, North Korea test-fired a new rocket engine, while Tillerson was still meeting with China, and later announced that they would launch nuclear weapons against the US, South Korea, and Japan "if a single bullet is fired by US and South Korean troops toward North Korea."

1,500 missiles Aimed at US military bases

When the meeting reconvened, China allegedly demanded the U.S. cancel a very large pending arms sale to Taiwan, and told Tillerson that no matter how many weapons the US supplies, they are no match for the the People's Liberation Army which, they said, has 1500 missiles aimed at the island and U.S. military bases in the region!

US military bases in Okinawa are within range of China's DF-16 ballistic missiles – which can hit targets with “pinpoint precision” from 1,500km away.

China then reminded Tillerson that the People's Liberation Army made clear in public statements during January, they see "war with the United States as a reality."

In January, Chinese military leaders released a statement on the official website of the PLA talking up war with the US as now a “practical reality”.

It was written by an official at the national defense mobilization department in the Central Military Commission, China's military high command.

Beijing is raging against the US as they call for the Pentagon to pull their warships and missile defenses out of the Pacific region.

"A war within the President's term (Xi Jinping of China)' or 'war breaking out tonight' are not just slogans, they are becoming a practical reality,” the commentary read, reported the South China Morning Post.

Chinese newspaper The Global Times, the mouthpiece of the Communist Party, also talked up war with the US.

"If the new US administration follows this route and adopts this attitude, then it will lead to a war between China and the US and that would mean the end of US history or even all of humanity,” Jin Canrong, associate dean from the University of China, told the paper.

He said: "Although the US is planning to send three aircraft- carriers to the West Pacific region, if they invade the South China Sea, we have the ability to destroy them all even if they send 10, let alone three."

Tillerson allegedly responded "If China wants to send its people to their deaths, that's China's choice, but China cannot tell the United States where we can sail our Navy or to whom we can sell weapons, and we are no longer going to tolerate China using North Korea as a Pitbull to intimidate the region."

After Secretary Tillerson departed from China. Chinese defense minister Feng Shih-kuan issued a shock announcement publicly. Speaking to lawmakers on Monday Feng said the missiles will bolster the “weapons modernization and military hard power” of China as tensions over the disputed South China Sea territory threaten to spill over into war.