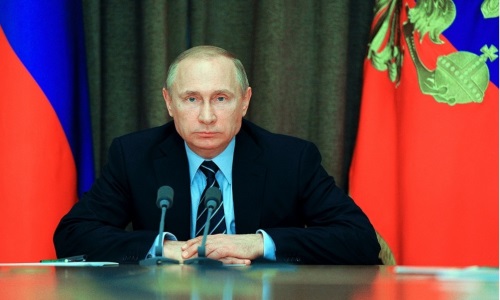 The Danger of a Nuclear War, US Strikes Syria, War between US and Russia

It has begun. Trump, declaring "national security interests," has ordered an attack on Syria, striking a Syrian government airfield with a volley of 50 Tomahawk missiles. The news is still breaking and could include a Russian military response.

War between US and Russia Could Be Sooner than Later. “The Danger of a Nuclear War” Russia’s preparedness for nuclear war.

In response to the cold war approaching the boiling point in recent weeks, and in total contrast to America, Russia has been busy preparing its citizens for potential nuclear war. Moscow ordered all Russian citizens, diplomats and students traveling, working or studying abroad to immediately return home. Members of Russia’s diplomatic corps were threatened with reprimands and career demotions should they refuse to comply with the Kremlin directive. Additionally 40 million Russian citizens, that’s near one-third of the nation’s total population, just completed an unprecedented massive nuclear war defense drill. Also unlike the US, Moscow has built underground facilities for housing its 12 million residents under the capital city for safe refuge. Again unlike America, Russia is taking the extreme threat of nuclear war with the West very seriously. Even MSM fixture ABC News ran a story how Russians have been preparing for a nuclear winter outcome. In stark contrast, outside of Putin bashing and the election sideshow, neither Washington nor its propaganda whores in the press have alerted Americans that they are currently in grave danger.

In fact it’s been an MSM news blackout while Russian media has told its citizens that nuclear war is “imminent.” Meanwhile as another sign that Putin means business, in response to NATO’s nuclear missiles activated in Romania and Poland, Putin has ordered at the ready his nuclear capable missiles in Kaliningrad, the Russian enclave between NATO members Poland and Lithuania.

“The Russians are Coming” Propaganda Ploy: Alleged “Russian Invasion” of US by way of Alaska.

No doubt,  propaganda  falsely blaming Putin for everything gone wrong in this world as yet more propaganda used to justify a US war against Russia.  US Navy official” warned that an unprotected part of America’s largest state Alaska with its closest point separating America from Russia just 50 miles, has been Putin’s planned designated target where Russian submarines will secure an invasion of our 50th state and proceed southward to the continental US.

Russia warned on Friday that U.S. cruise missile strikes on a Syrian air base could have "extremely serious" consequences, as President Donald Trump's first major foray into a foreign conflict opened up a rift between Moscow and Washington.
"We strongly condemn the illegitimate actions by the U.S. The consequences of this for regional and international stability could be extremely serious,” Russia's deputy U.N. envoy, Vladimir Safronkov, told a meeting of the U.N. Security Council on Friday.

Russian Prime Minister Dmitry Medvedev charged that the U.S. strikes were one step away from clashing with Russia's military.

The bottom line is the West and their terrorist allies are losing the war in Syria. The battle for Aleppo is being won as the Syrian Arab Army is making headway in the eastern part of Syria’s second largest city. Not only is the legitimate president of Syria – Bashar al-Assad – going to remain in power, but the US wet dream of a no fly zone under US control is not in the cards either. Putin has checkmated the neocon traitors by deploying his advanced S-400 and S-300 anti-aircraft and anti-missile defense systems vowing to shoot down any unidentified airplanes in the skies over Syria. The trained Syrians will be the ones pulling the trigger.

The FAA claimed that US military rockets were being launched in connection with “space operations” yet the only missiles in Montana are nuclear armed warhead missiles.The missile silos in Montana are armed with Multiple Independent Re-entry Vehicles (MIRV’s) and each MIRV contains a 100 kiloton nuclear warhead. Within a half hour after launch, each single rocket is capable of destroying eight cities anywhere on earth.

The US is realizing its longtime investment in terrorists and terrorism is being lost as Raqqa will be the final ISIS stronghold to be vanquished once Aleppo is liberated. Another second largest city in a neighboring country, Mosul will also be next, won back by Iraqi forces. The terrorists and their Western and Gulf State backers are going down in defeat. Knowing that US Empire’s run as the unipolar hegemonic kingpin of the world is rapidly fading, DC crazies are now acting out aggressively with wild abandon. Hopefully they’re not so deranged to push the button.

Meanwhile, barely noticed in a virtual media blackout in the West are at least a half dozen high alert, significant international developments events are simultaneously occurring now that foretell the start of World War III potentially just days away.