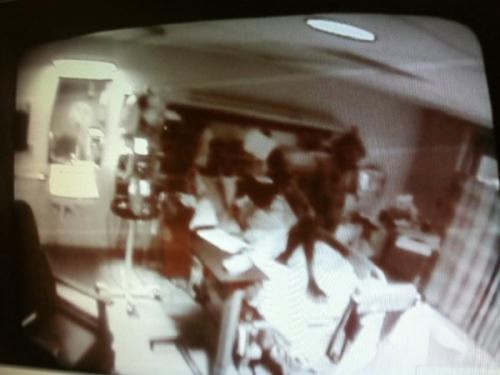 Quite a bit of chatter going on about a photo by an anonymous source, in an unknown hospital in an unnamed state, of a dark figure standing on a bed with a patient on it, which is being referred to as “creepy” and “freaky,” with guesses ranging from it being a demon to an astral body of the patient before death.

The caption on the photo shown below states the following:

“This picture was taken of a nurse’s viewing monitor. On the monitor, this black figure appeared standing on top of the patient who was lying in the bed.The patient died within a few hours of this figure appearing.”

If it is a photoshopped photo it is done well because the usual telltale signs of photoshop are not there.

Is this proof of demons? Are they here, surrounding us but we usually cannot see them? Is this what comes for us before we die?