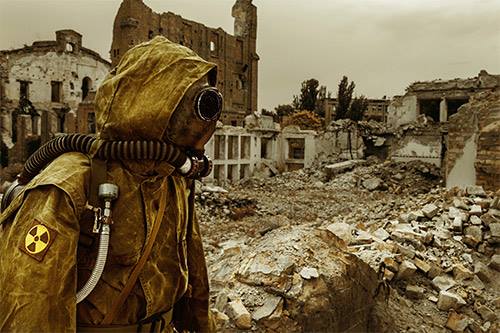 Earlier this year we reported that Texas game wardens on the southern border have been issued radiation detectors due to concerns that a nuclear or radiological device could be smuggled into the United States through the porous Mexican border.

It appears that the Department of Homeland Security is also taking the potential for a nuclear-based weapon of mass destruction seriously. According to a new report from NextGov the government has ordered some $20 million worth of wearable intelligent nuclear detection (WIND) units in an effort to boost domestic security:

Last year, DHS made a broad agency announcement soliciting proposals for so-called Wearable Intelligent Nuclear Detection, or WIND, technology. Employees would wear the products to ensure nuclear devices weren’t secretly being transported in areas like marine vessels, metro systems, or other public areas, according to DHS.

DHS was specifically searching for “advanced technology demonstrations,” which are for “mature prototype capable of providing reliable performance measurements in a challenging and realistic, albeit simulated, operational environment,” the BAA said.

DHS’ Domestic Nuclear Detection Office, whose mission is to protect the U.S. from nuclear devices, was specifically searching for a modular wearable system that could sense, localize and identify nuclear particles, including gamma rays and neutrons.

The move signals a real and emerging threat and one that the Obama administration highlighted in March in which they warned of the four ways a large-scale nuclear attack on U.S. soil could happen. Whatever the method, the end result would be devastating:

The most devastating but improbable scenario involves a group stealing a fully functional bomb from a nuclear-armed country. Most nuclear experts point to Pakistan as the likeliest source, though that would require cooperation with someone on the inside of Pakistan’s military.

Easier to pull off would be for IS or another group to obtain fissile material like highly enriched uranium, then turn it into a crude nuclear device delivered by truck or ship.

A third possibility is that extremists could bomb an existing nuclear facility, such as the Belgian waste plant, spreading highly radioactive material over a wide area.

The most likely scenario that security experts fear is that a group could get ahold of radioactive material, such as cesium or cobalt, for a dirty bomb that could be carried in a suitcase. Those materials are widely used in industrial, academic and hospital settings, with no consistent security standards across the globe. Last year, an Associated Press investigation revealed multiple attempts by black market smugglers to sell radioactive material to Middle East extremists.

We know for a fact that individuals from the middle east have been using the Southern corridor to enter the United States illegally. We also know that some of those individuals have ties to terrorist organizations.

With DHS actively looking for ways to detect nuclear radiation it appears that an attack on the United States is now a serious possibility.

Of course, no threat has been announced to the public and chances are that should one existthe American people won’t know until it’s too late.

Preparing for such an event is critical, because in the fallout (literally) there will be no assistance from emergency responders for days or weeks. That means law and order will break down, medical services will be non-existent and basic necessities will become unavailable.

Having food, water, self defense armaments will be essential to survival. But in a CBRN (Chemical, Biological, Radiologicla, Nuclear) event, an evacuation plan will be just as critical.

And if you are evacuating in a CBRN situation, advanced CBRN-rated breathing equipment will be a life saver.

As Tess Pennington notes in her book The Prepper’s Blueprint, you need to be ready to move the moment a serious threat presents itself or you risk being stuck in the midst of thousands of others who are trying to escape the danger:

If you are told to evacuate keep the following points in mind… If you are driving, keep the car windows and vents closed, and use recirculating air.

Due to the fear of panic and gridlock that will ensure from mass evacuations, most governments will delay mandatory evacuations until the last minute. This will only cause mass confusion and chaos at gas stations, grocery stores and on the streets. The best way to prevent this is to stay ahead of the crowd and prepare ahead of time.

There is a real possibility that one morning we’ll wake up to a massive terror attack on the United States.

Will you be ready for it?