Inevitability : The Nuclear Apocalypse is Coming 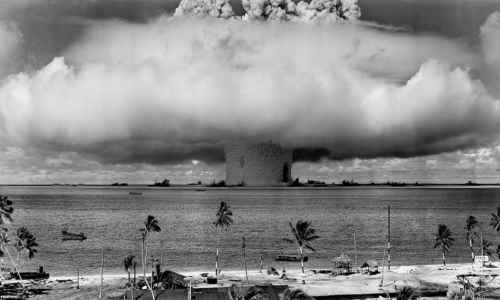 Inevitability : The Nuclear Apocalypse is Coming

Nuclear war is coming. Our officials are currently increasing the chances of that.

I only write ominous op-ed pieces like this in the spirit of hoping I’m an inaccurate prophet. But I’m unable to avoid the difficult conclusion that nuclear war, absent an immediate, fundamental, worldwide change in attitude, is an inevitable part of our future. It could be weeks, months, or years away. But it is coming.

It could break out at any moment between India and Pakistan, the most likely scenario at present. Pakistan is deploying tactical nuclear weapons controlled by local commanders on the front lines in Kashmir, as if the near-miss of the Cuban crisis of 1962 had never happened. War could almost as likely start between NATO and Russia. It might begin with an accident, a misinterpretation of computer blips, a terrorist act, a careless or calculated overreach by a dictator, or a troubled officer with access to sequestered codes. There are too many weapons of too many sizes connected by too many complex but imperfect electronic systems to too many fallible human beings.

If it happens, all our incremental steps toward a semblance of world order will disappear in a few minutes of unimaginable destruction, to be replaced by a barbaric chaos where medical facilities are overwhelmed and water and food supplies are contaminated. Those still alive at the periphery of the blasts will envy those annihilated at the center.

Millions of Americans live in areas guaranteed to suffer a major, catastrophic earthquake within the next thirty years. Millions more live in areas vulnerable to savage hurricanes and floods. Still more Americans live  in areas vulnerable to terrorist attacks or "technological disasters" of our own making. Why are they there? What have they done to get ready for these disasters? Recent events in New Orleans, Mexico City and Haiti show how truly vulnerable we are, and how slow an effective government response will be. This book can help by walking you through a step-by-step process of planning, preparation and action that will help you get ready for the catastrophe you just know is coming. This book is useful for all those who wish to survive the coming catastrophe, and help their families and close friends to survive as well. Fortune favors the prepared. Get ready!

The effects will be experienced around the world, even from a so-called “regional” war. As the ash and soot and radioactive particles from the detonations rise into the upper atmosphere and disperse upon the winds, we will learn just how small a planet we inhabit together—a lethal lesson with no do-over.

The political fallout will be equally grave and far-reaching. Those leaders who made lukewarm but ineffectual efforts to control the weapons, who paid lip service to non-proliferation treaties, who made high-minded speeches while convinced that disarmament initiatives would mean the end of their electability, will feel a remorse that screams within like the howling mobs that will surround their offices and palaces demanding to know why the leaders let disaster happen.

Not a day goes by that I do not ponder why it has not happened already. However ignored, this issue has hung over our lives like a gray pall. Working to prevent nuclear war has provided invaluable moments of shared hope, but feelings of foreboding have dominated. Morbid preoccupation seems less neurotic than total denial. Anyone who admits the urgency of this issue cringes and waits and wonders when, say, the radio goes temporarily dead—has it finally happened? There’s also the magical thinking that says that since it has not yet happened, there may indeed be miraculous hidden forces at work, helping us avoid the worst until we grow mature enough to realize our folly.

History suggests to us that divine intervention will not prevent the worst. It did not stop the Nazi holocaust. Nuclear weapons were conceived and created by people. People are equally capable of realizing that such weapons have not led, and cannot lead, to the global security we seek. It is this logical conclusion, sidestepped and diluted by hundreds of thousands of “experts,” but clear enough to the average 10-year-old, that can be the shared basis of universally applied, reciprocal negotiations toward absolute and total abolition. The world would rejoice in relief if it happened.

We have been gifted with the capacity to see. Instead, we are very close to doing ourselves in.Meanwhile we remain stubbornly blind. How much more deeply could we fail our 10-year-olds than by introducing them to a world where such hideous and unmerited suffering hangs over them? The bumper-sticker question persists: do we hate our enemies more than we love our children?

We have kept these weapons at the ready as our primary way to avoid looking at our own darkness. We have projected evil motives upon a series of less-than-fully-human stereotypes, from the toothy, sadistic, slant-eyed Orientals (suddenly transformed back into agonized human beings at Hiroshima and Nagasaki), to brutal, corrupt, vodka-swilling Soviets, to bearded, misogynistic Islamic thugs. And the real people behind these crude and false stereotypes have projected the same malevolence onto us. Out of this “us-and-them” animosity has arisen the systemic evil of world-destroying weapons.

Our mutual fear can only be mastered by living the golden rule common to all major religions, of doing as you would wish to be done by. Refusal to heed this practical advice has borne a perverse shadow-version of the universal rule of interdependence: if you do harm unto me, I will destroy you utterly—even if it also destroys me in the process!

We need to see, with the same visceral fright that we respond to a poisonous snake rearing up and baring its dripping fangs, the immediacy of the danger we face.

We have been gifted with the capacity to see. Instead, we are very close to doing ourselves in. We ignore the life-affirming realism of Jesus, Gandhi, the Dalai Lama and Martin Luther King in favor of the illusory “realism” of Kissinger, Cheney, Trump and Cruz. Millions on the planet continue to work their hearts out to wake people up to reasonable alternatives based in common interest and common sense.

This work is licensed under a Creative Commons Attribution-Share Alike 3.0 License

Winslow Myers, the author of “Living Beyond War: A Citizen’s Guide,” serves on the Board of Beyond War, a non-profit educational foundation whose mission is to explore, model and promote the means for humanity to live without war. Myers writes for PeaceVoice.