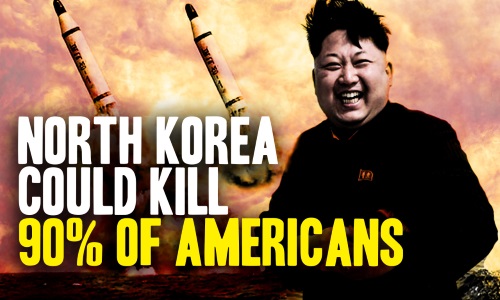 The U.S. Donald Trump administration must have prior consultation with Seoul before taking any confrontational actions concerning North Korea, including launching a preemptive strike, South Korean politicians said.

The politicians, including presidential candidate Moon Jae-in of the Democratic Party of Korea (DPK), said Seoul is directly involved in the North Korean issue, noting that any actions taken by Washington will have a direct impact on the Korean Peninsula.

The demand for prior consultation comes amid tensions following the surprise U.S. missile attack on Syria, which was seen as a powerful message to rogue states, such as North Korea and Iran, that the U.S. can take military action against them at any time.

North Korea has vowed to defend itself using a “powerful force of arms” — should the US keep sending ships toward the Korean Peninsula, reports say.

The Hermit Kingdom’s foreign ministry warned early Tuesday local time that it was ready for “war” in the event of further military moves like the one seen Sunday, when a US Navy strike group was sent to the region as a show of force against the communist nation.


North Korean officials, who were quoted by state news agency KCNA, said the act displayed “reckless moves for invading” and was ultimately proof that tensions between President Trump and leader Kim Jong Un had “reached a serious phase,” according to the Agence France-Presse.

“The DPRK is ready to react to any mode of war desired by the US,” a spokesman for North Korea’s foreign ministry said.

“We will take the toughest counteraction against the provocateurs in order to defend ourselves by powerful force of arms,” they added. “We will hold the US wholly accountable for the catastrophic consequences to be entailed by its outrageous actions.”

President Trump has been an outspoken critic of North Korea’s nuclear weapons program and has promised to deal with Pyongyang alone, should the Chinese refuse to help.

"By talking about military options, the U.S. government is trying to divert American people's attention from a complex situation in its domestic politics," Yang said. "South Korea should be active in taking diplomatic steps whenever the U.S. mentions preemptive strikes on the North, but the nation is not doing that. This is a problem."

According to the aforementioned North Korean defector, Thae Yong Ho, Kim would if he sensed an imminent threat from the US. Thae told NBC on Sunday that the tyrant is capable of “anything”—he’s a “man who can do anything beyond the normal imagination,” Thae warned.

As for Kim’s motivation, Thae says the leader “is obsessed with obtaining nukes because he saw what happened to Iraq’s Saddam Hussein and Libya’s Moammar Gadhafi, both of whom abandoned their countries’ weapons of mass destruction programs and then were overthrown by Western-backed forces,” NBC News wrote.

Have Americans been deceived about the North Korean threat? A former CIA director and a defense expert say yes, and they issue a dire warning: The blustery, bellicose hermit state has the capacity to make good on its threats to visit nuclear ruination upon the United States.

Moreover, the highest-profile North Korean defector in two decades said Sunday that if despotic leader Kim Jong-Un’s back were ever against the wall, he absolutely “would use his nuclear weapons with [an] ICBM,” an intercontinental ballistic missile—which could theoretically reach our shores.

Of course, most Americans may consider North Korea (DPRK) a mouse that roars. But according to former CIA director (1993-’95) R. James Woolsey and Dr. Peter Vincent Pry, chief of staff of the Congressional EMP Commission, this is a fatal mistake.

Writing at The Hill last week, they lament the “false assurance” by the media and certain officials that North Korea lacks the capacity to develop two crucial aspects of nuclear-ICBM technology: “[A]ny nation that has built nuclear weapons and long-range missiles, as North Korea has done, can easily overcome the relatively much simpler technological challenge of warhead miniaturization and reentry vehicle design,” the two men write.

“Indeed, North Korean dictator Kim Jong-Un has been photographed posing with what appears to be a genuine miniaturized nuclear warhead for ballistic missiles,” they continue. “And North Korea does, in fact, have two classes of ICBMs—the road mobile KN-08 and KN-14—which both appear to be equipped with sophisticated reentry vehicles.”

As to the DPRK’s technological prowess, note also that it’s one of only 12 entities worldwide to have sent satellites into space with their own indigenously developed launch vehicles.

Yet North Korea could do great damage even without nuclear missiles. For instance, write Woolsey and Pry, it “could deliver an atomic bomb hidden on a freighter sailing under a false flag into a U.S. port, or hire their terrorist allies to fly a nuclear 9/11 suicide mission across the unprotected border with Mexico.”

Both scenarios could leave one or more major cities in ashes, and the latter is another example of how the treasonous refusal to secure the border amounts to our politicians playing not just politics, but also fast and loose with American lives.

Woolsey and Pry also mention how in 2008, “the CIA’s top East Asia analyst publicly stated North Korea successfully miniaturized nuclear warheads for delivery on its Nodong medium-range missile. The Nodong is able to strike South Korea and Japan or, if launched off a freighter, even the United States.”

Other officials have sounded similar alarms. Former director of the Defense Intelligence Agency Lt. General Ronald Burgess echoed the above in 2011, warning of the DPRK’s ability to arm missiles with nuclear warheads. Going further, Admiral William Gortney, then commander of North American Aerospace Defense (NORAD), twice warned in 2015 that North Korea could strike the US with a nuclear-armed ICBM.

What kind of damage could be inflicted? North Korea has already tested atomic bombs in the 20-30-kiloton range (in contrast, the “Little Boy” device dropped on Hiroshima in 1945 was 15 kilotons). Furthermore, the Defense Department has stated that in January of last year the nation might have tested components of a hydrogen bomb—and the most formidable of these weapons are 3,000 times as powerful as Little Boy.

Yet while an attack with an H-bomb nuclear monster would involve millions of casualties, even it couldn’t wipe out 9 in 10 Americans. Wreaking such carnage with one device, say Woolsey, Pry and many others, would require a less well known approach: a high-altitude electromagnetic-pulse (EMP) attack.

An EMP device is a low-yield H-bomb (one to 10 kilotons) that emits an unusually high amount of gamma rays; the resulting pulse of electromagnetic radiation would, it is said, disrupt the entire electric grid. It would take out not just television, telephones and the Internet, but electronics nationwide—disabling food and water supply chains, banking systems, fuel manufacturing and production, hospitals, 911 call centers, post-1970 vehicles (which rely on electronics) and everything else associated with modern life.

In fact, the only debate among the most pessimistic doomsayers is, apparently, whether an EMP attack would bring us back to the 1800s…or the 1300s. Regardless, we’d be reduced to medieval-level population, say Woolsey and Pry, with 90 percent of Americans dying due to “starvation and societal collapse.”

If that’s not enough to keep you awake, consider that a device with the characteristics of a “super-EMP weapon” is precisely what the North Koreans have been testing, Pry stated last year. In addition, Woolsey and Pry tell us, “Two North Korean satellites, the KMS-3 and KMS-4, presently orbit over the U.S. on trajectories consistent with surprise EMP attack.”

Of course, others consider the threat overblown, saying an EMP attack isn’t plausible and that our electric grid is more pulse-resistant than the nightmare-weavers claim. Whatever the case, is it plausible that Kim Jong Un would launch any nuclear attack against America?

According to the aforementioned North Korean defector, Thae Yong Ho, Kim would if he sensed an imminent threat from the US. Thae told NBC on Sunday that the tyrant is capable of “anything”—he’s a “man who can do anything beyond the normal imagination,” Thae warned.

As for Kim’s motivation, Thae says the leader “is obsessed with obtaining nukes because he saw what happened to Iraq’s Saddam Hussein and Libya’s Moammar Gadhafi, both of whom abandoned their countries’ weapons of mass destruction programs and then were overthrown by Western-backed forces,” NBC News wrote.

Woolsey and Pry theorize that officials have downplayed Kim’s dangerousness because no administration “wants to acknowledge that North Korea is an existential threat on their watch.” Yet the Trump administration has taken a more aggressive stance vis-à-vis the DPRK, with Secretary of State Rex Tillerson saying military action is “on the table.” Woolsey and Pry certainly endorse this, recommending the neutralization of North Korea by any means necessary. But is this the wisest course?

Pat Buchanan, longtime critic of the America-as-world-policeman philosophy, doesn’t think so. He opines that the only reason Kim seeks the capacity to strike a distant superpower is that we have 28,500 troops on his border and a treaty obliging us to fight alongside South Korea. Thus are the perils of the entangling alliances that are, as George Washington believed, “transmission belts of war,” writes Buchanan.

We perhaps should have left the Korean peninsula long ago, once South Korea was strong enough to stand alone. Being far wealthier than its northern neighbor, it can devote more resources to defense, and the nation already boasts the world’s seventh-strongest military. We don’t need to fight its battles.

But now we may have to fight one more of our own; that is, if Kim is as crazy as some say. We can only hope his grasp of reality is better than we think—or that our doomsayers’ grasp of it is worse than we fear.