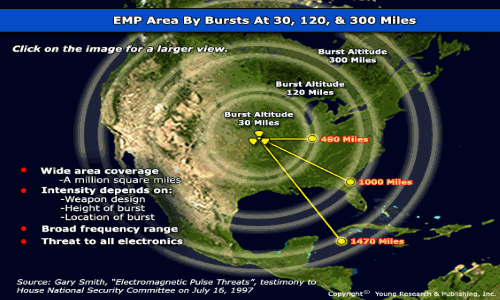 For years, I have warned about an EMP Attack on America by Iran or North Korea, but now we can add Russia, China and even the Islamic Terror Group ISIS to the list of enemies contemplating such an attack. An EMP attack would FRY the Nation’s Power Grid, leaving 1/2-3/4 of the Nation in darkness and putting us back into the stone age. An electromagnetic pulse (EMP), also called electromagnetic disturbance, is a burst of electromagnetic energy, most widely known as being emitted from the Sun, but today it can also be manmade. While Nuclear warfare is by far the worst threat facing mankind, EMP warfare is not as devastating initially, but just as deadly over time, and much harder to defend against. North Korea now has two satellites orbiting over the United States capable of performing a surprise EMP attack at an altitude and trajectory that evades U.S. National Missile Defenses.

A National Security expert, Peter Vincent Pry, told Joseph Farah of WorldNetDaily, that the North Korean satellites can be commanded either to deorbit to hit a target on the ground or explode at a high altitude. Both options would create an EMP effect, which would knock out the U.S. power grid and critical infrastructures that depend on it. Iran and North Korea do not need to drop a nuclear bomb on America to do the Nation harm. All they need is a nuclear warhead exploding in space within 300 miles above the USA. After the blast mingles with the magnetic field above any major city, the result would be a BLACKOUT of much of the Nation’s Power Grid. The Grid is currently DEFENSELESS against such an attack or against a powerful Solar Flare from the Sun which would do equal damage.

The two Korean satellites, KMS 3-2 and KMS 4, are currently orbiting at an altitude of 300 miles, with trajectories that put them daily over America. At this altitude, an EMP could impact much of the continental United States, according to EMP experts. This news comes at the same time that the maniacal leader of North Korea, Kim Jong Un, has ordered his rocket forces to PREPARE for a nuclear attack on America. His regime has released videos depicting attacks on Washington and New York City.

Iran, Russia, and China, along with North Korea, all possess the ability to launch an EMP attack that could indefinitely shut down America’s communications, transportation, finance, water and food delivery, sanitation, medical equipment, emergency services, as well as oil and natural gas pipelines. I’ve reported before that Iran has WARSHIPS parked off of the Coasts of America, from which they could fire a nuclear weapon into our national atmosphere resulting in an EMP burst. A top Iranian Naval Commander said that “Iran’s Military fleet is approaching the United States’ maritime BORDERS, and this move has A MESSAGE.”

We all take electricity for granted in today’s day and age. Our cell phones, television, heating, air conditioning, and  refrigerators would all be useless after an EMP attack, and that is why many experts are calling it the “biggest existential threat that our civilization faces.” Homeland Security warns that an attack on America’s power grid is coming and it’s not a matter of if, but WHEN. Former CIA Director, James Woolsey, called the vulnerability of the grid a “really troubling problem that keeps him up at night.”

Woolsey says that the reason the American people are not made more aware of such a pressing threat, is because the federal government officials and experts in the electrical business do not want the public to know that the grid is “vulnerable.” The “Congressional Commission to Assess the Threat to the United States from EMP Attack” says such an attack would wipe out about 90% of the U.S. population within two years of the event as a result of disease, food scarcity and the complete breakdown of society. As the Holy Bible prophesies, truly, “DARKNESS will cover the land.”

So just how vulnerable is the Nation’s Power Grid exactly? Utilities reported 500 attacks on the grid resulting in power disruptions between 2011 and 2018. The Nation’s Electrical Grid has become one of ISIS’ main targets when they infiltrate the USA. Although this threat is ever on the horizon and more likely to occur than a nuclear bomb attack by America’s many enemies, we Christians can take comfort knowing that The Good Lord will rapture us before such a disaster takes place. When our Faith and hope is in God and His faithful protection, we have nothing to fear.

EMP On America: Preppers Vs Non-Preppers- Who Will Live, Who Will Die in the 1st 72 Hours