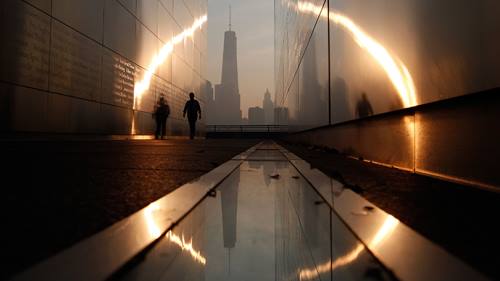 A British news channel is preparing to broadcast video footage of the September 11, 2001 terrorist attacks captured from outer space for the first time in the coming weeks.

Channel 4, a public service television station based in the United Kingdom, has announced that it will show footage from that Tuesday morning captured from the International Space Station by Frank Culbertson, the only American on board the ISS. When Culbertson was notified that something had occurred in New York, he realized they would be passing over the city soon.

“I zipped around the station until I found a window that would give me a view of New York City and grabbed the nearest camera,” he told Space.com last year. “The smoke seemed to have an odd bloom to it at the base of the column that was streaming south of the city. After reading one of the news articles we just received, I believe we were looking at New York around the time of, or shortly after, the collapse of the second tower.”

“I didn’t know exactly what was happening, but I knew it was really bad because there was a big cloud of debris covering Manhattan,” he went on. “That’s when it really became painful because it was like seeing a wound in the side of your country, your family, your friends.”

Culbertson learned hours after the attack that his friend, Chic Burlingame, was one of the pilots who died in the attack. Burlingame was steering American Airlines Flight 77, the aircraft that was eventually flown into the Pentagon in Washington DC.

Despite sitting more than 200 miles above the scene, Culbertson captured the images that have been replicated thousands of times across the media. The footage, which has never been broadcast to the public, will be aired on March 16 as part of a documentary series focusing on the lives of astronauts.

“Not every frame has been seen before, so every frame that was shot on that day is in the show,” Tom Brisley, the creative director of the Channel 4 project, told the Guardian.

At one point, Culbertson plays the Taps trumpet call as a tribute to the day’s events. He will also be interviewed throughout the film to explain what it was like to have such a unique view.

Culbertson wrote a letter on September 12, reflecting on the events that took place the previous day.

“I couldn’t even imagine the particulars, even before the news of further destruction began coming in,” he wrote. “Other than the emotional impact of our country being attacked and thousands of our citizens and maybe some friends being killed, the most overwhelming feeling being where I am is one of isolation.”

But as the September 11 attacks turned into the wars in Afghanistan and Iraq, a number of researchers at universities across the US have warned that media consumers who repeatedly expose themselves to such gruesome images could be putting themselves at risk of psychological damage.

Roxanne Cohen Silver, a professor of psychology and social behavior at UC Irvine, said that people who spent four hours or more soaking up 9/11 or Iraq War coverage were more likely to experience acute stress.

“The results suggest that exposure to graphic media images may be an important mechanism through which the impact of collective trauma is dispersed widely,” Silver said, as quoted by the university’s website. “Our findings are both relevant and timely as vivid images reach larger audiences than ever before through YouTube, social media and smartphones.”