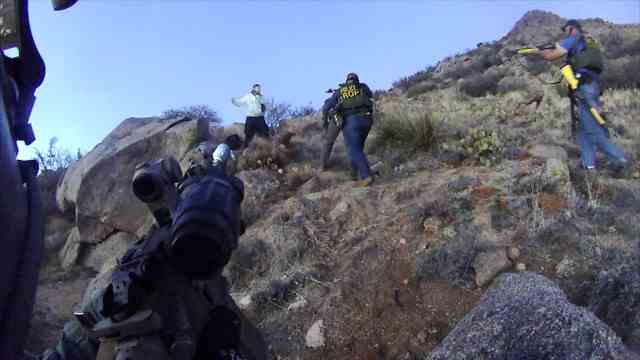 38 year old James Boyd had been camping in a spot that the state deemed “illegal.” Trigger happy officers were dispatched to the scene and Boyd was murdered by them.

Boyd was being cordial and surrendering and he started walking down the mountain. At this point the aggressive and violent escalation by police led to a flash bang grenade and then shots fired.

Apparently cops wearing cameras does not deter them from murdering people.

According to ABQ Journal, The illegal camper shot by Albuquerque police this week was turning away from officers when they fired at him, according to video released by Chief Gorden Eden on Friday.

The shots come after a confrontation in which the man, identified as 38-year-old James Boyd, tells police he’s going to walk down the mountain with them.

“Don’t change up the agreement,” Boyd says. “I’m going to try to walk with you.”

He tells officers he’s not a murderer.

Boyd picks up his belongings and appears ready to walk down toward officers. An officer fires a flash-bang device, which disorients Boyd.

Boyd appears to pull out knives in both hands as an officer with a dog approaches him. He makes a threatening motion toward the officer, then starts to turn around away from police

That’s when shots ring out, and Boyd hits the ground. Blood can be seen on the rocks behind him.

Of Course the Albuquerque police said officers were justified in murdering this man because he had made “threatening moves” from 30 feet away.

Below is a summary of Eden’s comments from a news conference held on Friday.

Below is a summary of Eden’s comments, as he made them.

– Chief Eden said APD has interviewed 40 witnesses so far, and that the suspect was sleeping as officers approached.

– The chief showed a video of the incident. It shows officers telling the man to show his hands. They demand repeatedly: “Put the knife down!”

– In the video, Boyd tells officers he’s been trying to contact APD for months. He talks almost non-stop. Officers keep their guns trained on him.

– Chief Eden said the suspect continued to rant after a crisis-intervention officer arrived. The suspect tells officers he’s an agent of the Department of Defense.

– Officers appear to fire less-than-lethal rounds, after which the man drops to ground with the knife still in his hand. They also fired live-rounds, but it’s not clear from the video which shots were live and which weren’t.

– The chief said the suspect is 38 years old and that he refused to follow directions.

– Chief Eden said the man was hit by a live round, but did not say that’s what killed him.

– Eden said the man made a threatening move toward an officer, and that’s what triggered the shooting. The shooting was justified, Eden said.

– A public information officer announces that the news conference is over. Eden continues taking a few questions before finally walking out as a Journal reporter continues to ask questions.

Unfortunately these cops will not likely face any charges and they will go on “serving and protecting.” Even if they were found guilty of anything, the institution would remain, allowing for more sociopaths to enter into the ranks.

As long as Americans continue to believe in the myth of authority and never question a world without government run police this will remain the norm. 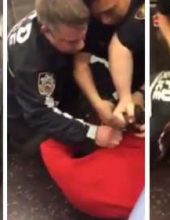 AMERICAS COLLAPSE, MARTIAL LAW ,POLICE STATE AND HOW THE NWO PLAN TO KILL US ! END TIME WARNING FOR AMERICA