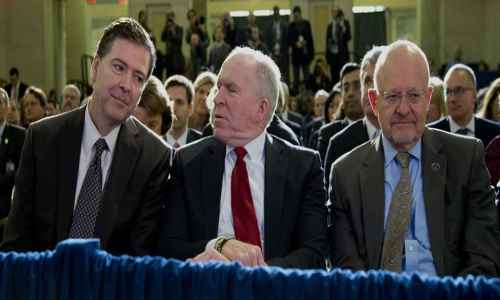 Brennan is in DEEP SHIT and he knows it.  He seems to finally be realizing that he has only two choices: Jail or Suicide.

Innuendos and symbolism;  the double meaning behind certain phrases. There is an entire language being spoken out in public these days which is hidden in plain sight.   For those with the eyes to see – the writing is on-the-wall . . . “Wahabi John” is reeking of desperation .

I hereby demand, and will do so officially tomorrow, that the Department of Justice look into whether or not the FBI/DOJ infiltrated or surveilled the Trump Campaign for Political Purposes – and if any such demands or requests were made by people within the Obama Administration!

To their absolute horror, Hillary Clinton lost the election and now all the Deep State efforts underhandedly used to try stealing the election in favor of Hillary, are coming to light.  So what did Brennan say that threatened President Trump?   This:

“Any man can make mistakes, but only an idiot persists in his error.”

Brennan seems terrified that America now sees that he, along with former DNI James Clapper, former Attorney General Loretta Lynch, former FBI Director James Comey and others,  misused the American Intelligence apparatus to spy on one Presidential candidate for the express benefit of another candidate; whom Brennan and company wanted elected!

Worse, it is now clearly evident to many that several of  key players in that sordid affair went so far as to Criminally Conspire to actually MANUFACTURE phony “evidence” in an apparent effort to frame – and presumably unseat – the then-incoming President elect!

For instance, Loretta Lynch PERSONALLY approved a Visa for a Russian Lawyer – previously BARRED entry into the US – to come into the country specifically for a meeting with the Trump Campaign.  Lynch, Brennan, Comey et. al, NEEDED such a meeting to take place, in order to create the false appearance of “Russia Collusion.”

Think about this undisputed fact for a moment: The Attorney General of the United States personally participated in an effort to literally MAKE UP phony evidence against an incoming US President!   This makes Watergate in the Nixon era, look like kid’s stuff.

Brennan is caught in a perjury trap over his statements about Hillary’s phony dossier in a May 2017 testimony to the intel panel.

Mr. Brennan seems to be finally realizing he and his cohorts have only two choices: JAIL or SUICIDE.

They should make their choice before someone else resolves the choice for them.