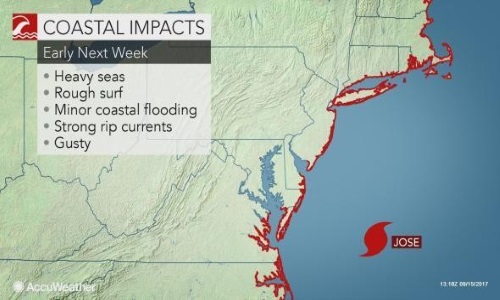 Hurricane Jose is moving northwest in the Atlantic Ocean, heading toward the New Jersey and New York City area by Tuesday, but that's about the ONLY thing which is certain as of 8:30 AM Saturday Morning.  The NYC/NJ area could get anything from a "rough ride" to a "direct hit" or "nothing."  Forecasters just don't know.  It's time to prepare, just in case.

"Swells from Jose are likely to create dangerous surf and rip current conditions through at least the middle of next week," the National Weather Service's Mount Holly office said in a storm update on its Twitter feed.

There's a moderate risk of dangerous rip currents forming along the Jersey Shore, as well as along beaches in Delaware, New York City and Long Island. The risk is expected to rise to high this weekend.

The weather service said coastal flooding is possible early next week along the Jersey Shore.

"Very windy conditions are possible along the coast on Tuesday. Exactly how high and how far inland the winds will be is also dependent on the track of Jose and how close it comes to our coast," the weather service said. 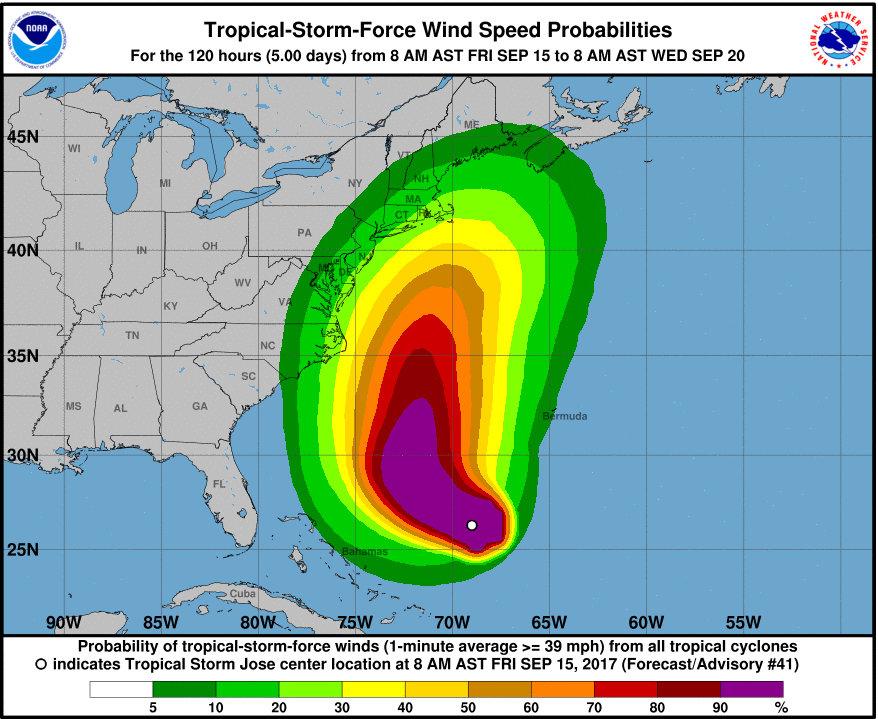 Forecasters from the New York regional office of the National Weather Service say they believe Jose will move north and east during the next few days, with the center of the storm passing southeast of Montauk, on the eastern end of Long Island, late Tuesday to early Wednesday.

In a briefing issued on Friday, they note that "wind and surge impacts will be felt well outside the cone."

Here's a look at what is expected in New York City, on Long Island and in southern Connecticut, based on Friday’s forecast track. 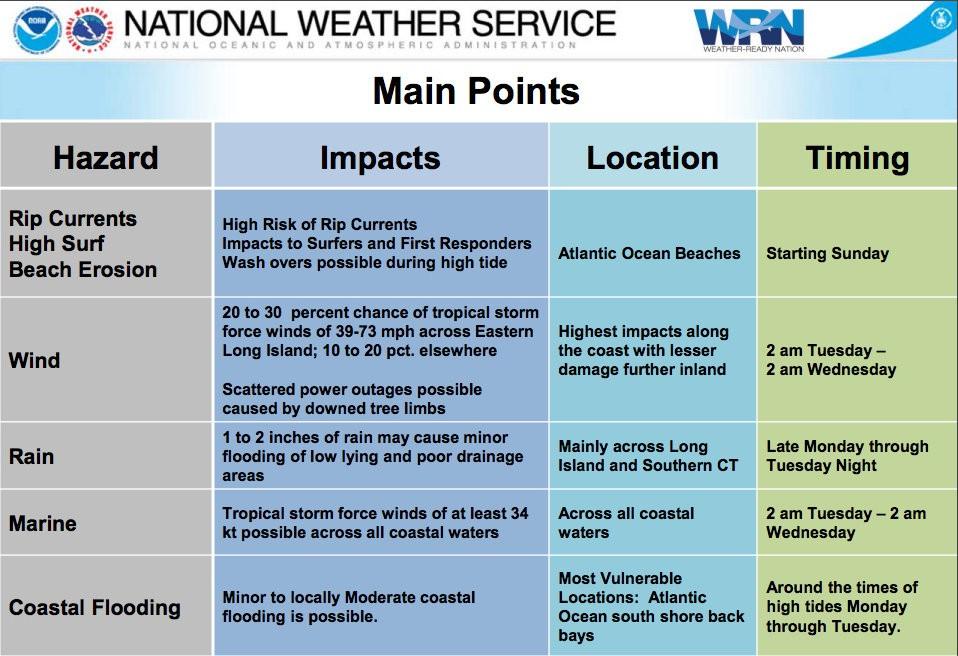 It is better to prepare NOW, rather than wait until things become urgent.

Remove any object from your porches or yard which might become projectiles in strong wind gusts.  Lawn/Patio furniture and umbrellas can sail through windows of your house, so take them down and take them inside.

Top-off your car fuel tank and if your have an electric generator, make certain you have fuel for it BEFORE the storm comes and the lights go out.

Of course, you should have flashlight(s) and a radio which operates on batteries so you can tune-in to news and official information.

DON'T MAKE THE SAME MISTAKES AS HOUSTON and FLORIDA

Folks in Houston made the terrible mistake of waiting until one day before Hurricane Harvey struck.  When they finally did go shopping for food, fuel and such, they found EMPTY supermarket shelves and EMPTY gas stations.  The same things happened to Floridians when Hurricane Irma arrived: No food, water or gasoline.

As of Saturday Morning, here are the computer MODELS.  While forecasters believe the Hurricane will follow one of the COLORED LINE tracks, look closely at the light gray model lines . . . showing a very close rough ride, or even some DIRECT HITS:

We are in " the cone of uncertainty."  If Jose travels to the western edge of this cone, we get hit!  Here is the official report from the National Hurricane Center as of 5 AM Saturday: 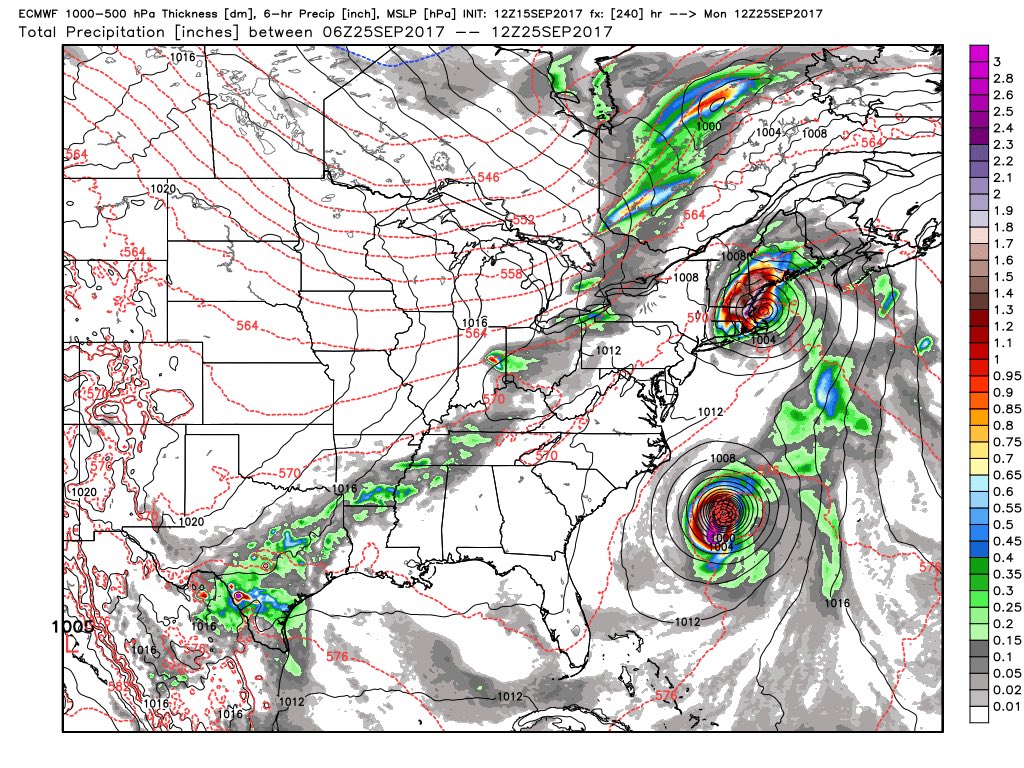 According to the computer model — which may be incorrect and may change — present Hurricane "Jose'" will be within 200 miles of the New Jersey / New York City coast line next Tuesday, and will continue north to make a DIRECT IMPACT on New England; while a still un-named new Hurricane will ALSO be coming up the east coast!

Folks in New Jersey and New York City are STRONGLY URGED to keep a VERY watchful eye on these storms and start preparing now . . . just in case.

Have emergency food, emergency water, a way to cook if power is out for an extendedperiod and a power supply (generator) to keep your refrigerator working and maybe a light or two on in your home.

Keep your cars and trucks topped-off with gasoline, and have extra fuel for the vehicle and for any generator you have.

If the storms pass us by, you can always eat the food and drink the water later.  You can always use the fuel later.  But it is better to HAVE IT and not need it, than to NEED IT and not have it.

Here is the latest report from Hurricane Hunter aircraft which flew through "Jose'" this afternoon: 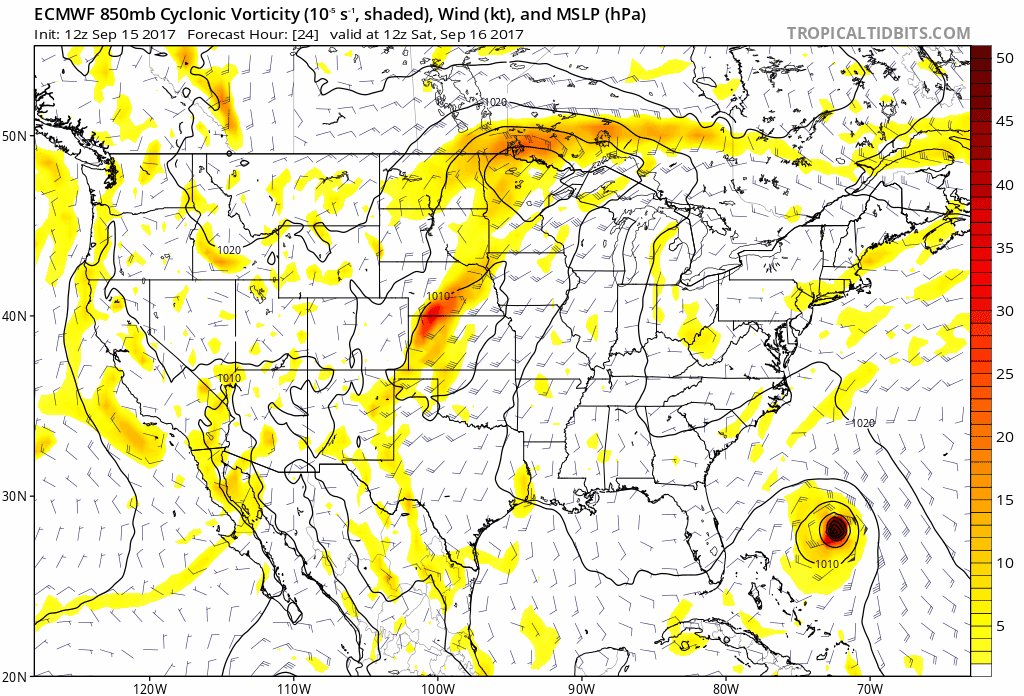 P.S.  It may get even worse. The National Weather Service Global FOrecast System (GFS) is just insane with it's current run. Jose gets incredibly close to the U.S. (maybe too close to call hitting or not Nantucket, Massachusetts between Hour 114-120), has another storm hitting North Carolina about hour 252 as a hurricane, has another storm hitting Florida between hour 312-324 as a strong tropical storm or probably cat 1 hurricane, AND what's that between hours 372-384?