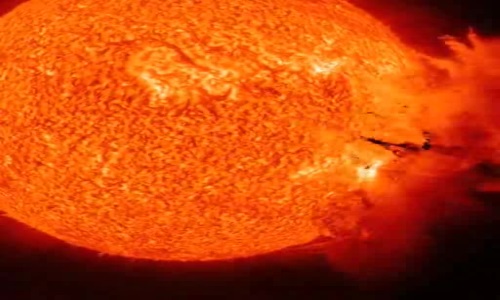 THE EARTH HAS a roughly 12 percent chance of experiencing an enormous megaflare erupting from the sun in the next months. This event could potentially cause trillions of dollars’ worth of damage and take up to a decade to recover from.

Such an extreme event is considered to be relatively rare. The last gigantic solar storm, known as the Carrington Event, occurred more than 150 years ago and was the most powerful such event in recorded history.

That a rival to this event might have a greater than 10 percent chance of happening in this year was surprising to space physicist Pete Riley, senior scientist at Predictive Science in San Diego, California, who published the estimate in Space Weather on Feb. 23.

“Even if it’s off by a factor of two, that’s a much larger number than I thought,” he said.

Earth’s sun goes through an 11-year cycle of increased and decreased activity. During solar maximum, it’s dotted with many sunspots and enormous magnetic whirlwinds erupt from its surface. Occasionally, these flares burst outward from the sun, spewing a mass of charged particles out into space.

Small solar flares happen quite often whereas very large ones are infrequent, a mathematical distribution known as a power law. Riley was able to estimate the chance of an enormous solar flare by looking at historical databases and calculating the relation between the size and occurrence of solar flares.

The biggest solar event ever seen was the Carrington Event, which occurred on Sept. 1, 1859. That morning, astronomer Richard Carrington watched an enormous solar flare erupt from the sun’s surface, emitting a particle stream at the Earth traveling more than 4 million miles per hour.

When they hit the Earth’s atmosphere, those particles generated the intense ghostly ribbons of light known as auroras. Though typically relegated to the most northerly and southerly parts of the planet, the atmospheric phenomenon reached as far as Cuba, Hawaii, and northern Chile. People in New York City gathered on sidewalks and rooftops to watch “the heavens … arrayed in a drapery more gorgeous than they have been for years,” as The New York Times described it.

'It's like being able to see a cyclone coming but not knowing the wind speed until it hits your boat 50 miles off the coast.'Auroras may be beautiful, but the charged particles can wreak havoc on electrical systems. At the time of the Carrington Event, telegraph stations caught on fire, their networks experienced major outages and magnetic observatories recorded disturbances in the Earth’s field that were literally off the scale.


In today’s electrically dependent modern world, a similar scale solar storm could have catastrophic consequences. Auroras damage electrical power grids and may contribute to the erosion of oil and gas pipelines. They can disrupt GPS satellites and disturb or even completely black out radio communication on Earth.

During a geomagnetic storm in 1989, for instance, Canada’s Hydro-Quebec power grid collapsed within 90 seconds, leaving millions without power for up to nine hours.

The potential collateral damage in the U.S. of a Carrington-type solar storm might be between $1 trillion and $2 trillion in the first year alone, with full recovery taking an estimated four to 10 years, according to a 2008 report from the National Research Council.

“A longer-term outage would likely include, for example, disruption of the transportation, communication, banking, and finance systems, and government services; the breakdown of the distribution of potable water owing to pump failure; and the loss of perishable foods and medications because of lack of refrigeration,” the NRC report said.

But such possibilities likely represent only the worst-case scenario, said Robert Rutledge, lead of the forecast office at the NOAA/National Weather Service Space Weather Prediction Center. The potential dangers might be significantly less, since power companies are aware of such problems and can take action to mitigate them.

One solution is to rebuild the aging power grid to be less vulnerable to solar disruptions.

For instance, companies may store power in areas where little damage is expected or bring on additional lines to help with power overloads. This is assuming, of course, that they are given enough warning as to the time and location of a solar storm’s impact on the Earth. Satellites relatively close to Earth are required to measure the exact strength and orientation of a storm.

“It’s like being able to see a cyclone coming but not knowing the wind speed until it hits your boat 50 miles off the coast,” Rutledge said.


Another is better forecasting. Scientists using the new Solar Dynamics Observatory spacecraft are hoping to get a better understanding of how the sun behaves as it moves deeper into its next maximum and begins generating bigger storms. (See some of SDO's first sun pictures.)

These studies may help scientists predict when and where solar flares might appear and whether a given storm is pointed at Earth.

Solar Storms Storming to Earth. How to Prepare.

Solar storms are in the news again, and for good reason!  We’re at the top of a 100-year cycle for solar bursts, and our modern life would be in jeopardy if the solar storms became strong enough.  Here are the views of some scientists about solar storms that are coming, and what you can do to prepare. Watch.

If a massive coronal ejection hit the Earth, there would be substantial communication damage, the electrical grid would be disrupted, major electrical outages, possible car, truck, transportation damage, and most likely financial meltdown. With these in combination with riots, shortages of food, panic, loss of jobs, loss of transportation, loss of sewage service, no refrigeration for food, limited transportation to transport the food, and the tensions of people being hot, cold, hungry and scared, citizens of Earth could see events that they had never witnessed before. In the big cities, the water systems could be cut off, the sewage systems could stop, the gas pumps might not work and anything that requires electricity to operate would possibly cease to function.

In a matter of hours, because of panic, sense of survival and being terrified of what is happening, the instinct of staying alive would kick in to many people. What would you do? We have been brainwashed, so to speak, to stay calm, to obey laws, to follow directions and not to ask questions. This could all suddenly change, especially in the large cities like New York, Atlanta, Chicago and Huston. Each city has about 3 days supply of food, water and supplies, when things are going good, but take out electricity, refrigeration and the mode of transportation, then the mentality of humans would change.

For anyone living in the South when the possibility of snow, hurricane or shortage of gas is announced, can think of how the mentality of people change. Every single loaf of bread, every shelf of bottled water, all the charcoal, all the processed meat, all milk, all candles, all matches and any other preparedness item is gone within a matter of hours from stores. These are just announcements of a coming storm, not an actual storm that has hit. Also all of us saw of the New Orleans hurricane that hit and of what actions that turned some of the normal everyday people into rioters and looters..

Remember… back in those days, there was no electricity… no refrigerators… no law enforcement… and certainly no grocery store or supermarkets… Some of these exceptional skills are hundreds of years of old and they were learned the

hard way by the early pioneers.

WARNING: How Iran Could Destroy America with a Single Bomb – US Government ACTUALLY Preparing for EMP Event – Major Disasters Can Knock Out Power for Several Weeks ( Surviving A Long Term Power Loss) 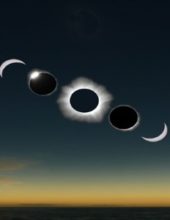