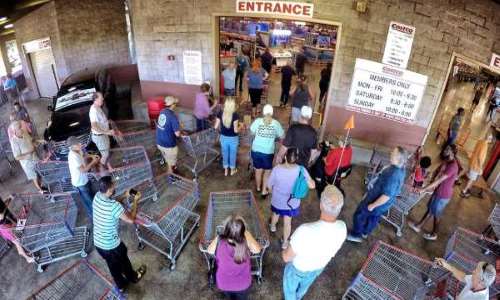 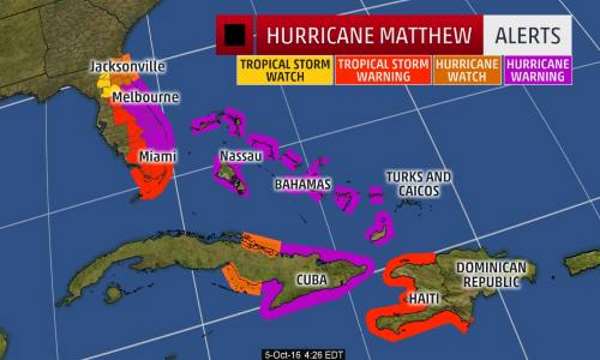 Hurricane Matthew is now north of eastern Cuba, as a reintensifying Category 3 hurricane. Satellite imagery shows convection re-wrapping around the center, and there have been lightning strikes near the eyewall, indicating an intensification is taking place. 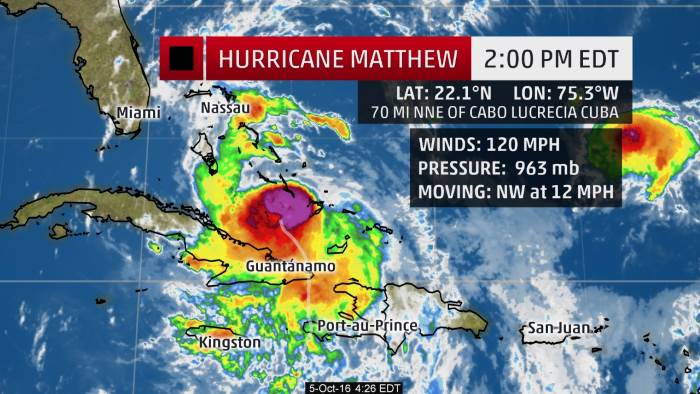 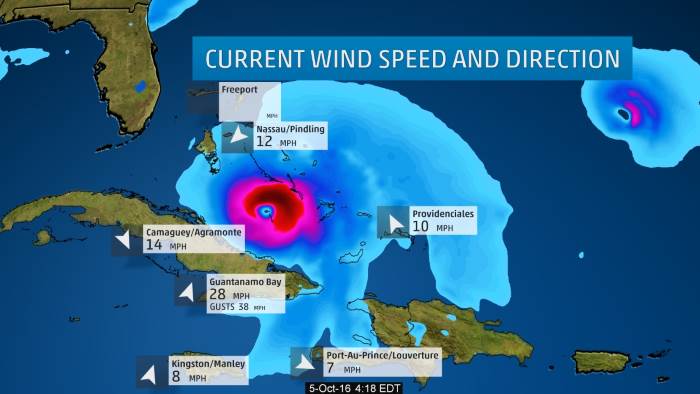 Impacts are beginning to wane in Hispañola (including Haiti), but mudslides may continue for days thanks to rain-soaked ground.

Meanwhile, conditions will steadily worsen in the Bahamas.

Here is the approximate timing of the worst wind and surge impacts, coinciding with the nearest passage of the eyewall of Matthew in the Bahamas: 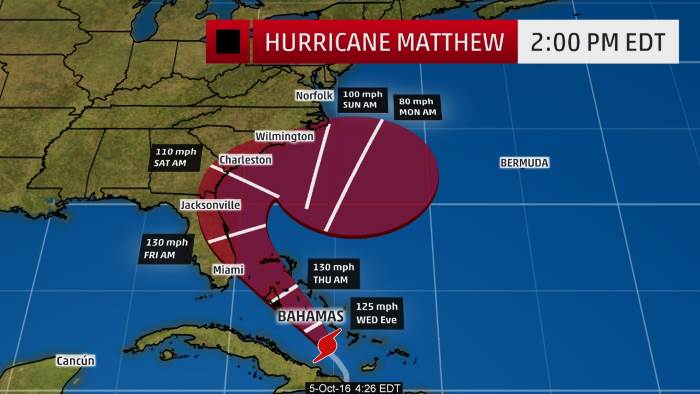 Over a foot of rainfall from Matthew will trigger life-threatening flash floods and mudslides. Here are the latest storm-total rainfall amounts from the National Hurricane Center:

On the current forecast track, here are the latest storm surge forecasts from the NHC, above normal tide levels at high tide:

It's worth noting this forecast for the Bahamas is on the order of storm surge witnessed during Hurricane Joaquin almost exactly one year ago, only for, potentially, the entire chain, rather than just the central and southeast Bahamas.

Battering waves will ride atop the storm surge, and coastal flooding from large waves may begin well in advance and ahead of Matthew's center.

Hurricane-force winds, with peak timing as outlined above, will lead to widespread structural damage, particularly to poorly-built structures, numerous downed trees and widespread power outages. Due to wet ground, trees will be even more susceptible to being toppled.

Matthew's center will make a close-enough pass to a large swath of eastern Florida to bring hurricane-force conditions at least to the Atlantic coast. If the center moves close enough, at least the western eyewall could bring destructive winds to at least Category 3 intensity.

The reason for this is stronger high pressure aloft persisting over the western Atlantic and East Coast of the U.S., helping to trap Matthew close to the coast. 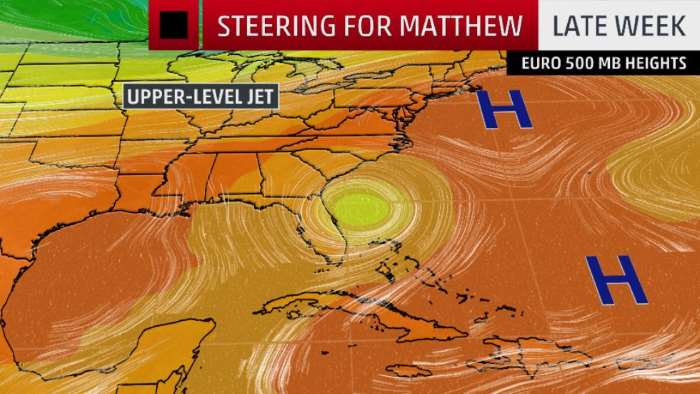 Upper-level steering factors in play for Matthew later this week.

Here is the approximate timing of the worst wind and surge impacts, coinciding with the nearest passage of the eyewall of Matthew. (Note that Matthew's eye may never make landfall, but its eyewall, containing the hurricane's strongest winds, may do so.) 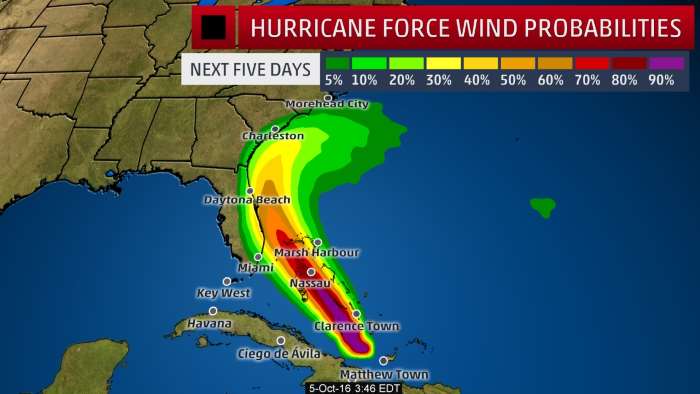 Small, subtle changes in the path of the eyewall, sometimes not resolvable until hours before the passage, will make a large difference on wind impact.

(MORE: When Hurricanes Parallel the Coast Instead of Making Landfall)

This uncertainty was best summarized by the 11 a.m. Wednesday forecast from the National Hurricane Center:

When a hurricane is forecast to take a track roughly parallel to a coastline, as Matthew is forecast to do from Florida through South Carolina, it becomes very difficult to specify impacts at any one location.  For example, only a small deviation of the track to the left of the NHC forecast could bring the core of a major hurricane onshore within the hurricane warning area in Florida. However, a small deviation to the right could keep the hurricane-force winds offshore.

In addition to the wind damage potential, significant storm surge flooding is possible along the Florida East coast north of West Palm Beach building Thursday, continuing into Friday. The storm surge flood potential will spread up the coasts of Georgia, South Carolina and southern North Carolina through Saturday. Battering waves riding atop the surge will lead to beach erosion.

Again, depending on the exact path of Matthew, rainfall flooding may be a threat, as well, along parts of the Southeast coast into the weekend.

You may have noticed the forecast track has changed for areas from North Carolina northward, as it now appears increasingly likely Matthew will not get "picked up" by a southward dip in the jet stream forecast to push into the Northeast U.S. this weekend.

Instead, Matthew may drop southeast away from the coastal Carolinas later Sunday. It's possible Matthew could then meander off the Southeast coast or northeast of the northwest Bahamas into early next week, but details on where it may eventually go from there are uncertain at this time.

All interests along the Southeast U.S. East Coast should be rushing preparations to completion.

Check back with us frequently at weather.com for any important forecast updates.

George F.L. Charles Airport on St. Lucia picked up 9.21 inches of rain Wednesday. On the south side of the island, Hewanorra Int'l Airport picked up 13.19 inches of rain in just 12 hours from 8 p.m. Wednesday through 8 a.m. Thursday, according to the Antigua Met Service.

>>> If a major catastrophic event ever hits America  , will you be able to sustain  your family in the aftermath?   The Lost Ways Book teaches you how you can survive in the worst-case scenario with the minimum resources available.It comes as a step-by-step guide accompanied by pictures and teaches you how to use basic ingredients to make super-food for your loved ones. <<<

A wind gust to 89 mph was reported in St. Pierre, Martinique, Wednesday evening. Some stations are elevated at 50 to 100 feet. Sustained winds of 39 mph were reported on the island of Barbados.

According to Colorado State University tropical scientist Dr. Phil Klotzbach, Matthew became the lowest latitude Category 5 hurricane in the Atlantic on record (beating the old record set by Ivan in 2004).

Some outer rainbands triggered flash flooding in Jamaica Sunday, hundreds of miles away from the center of Matthew. 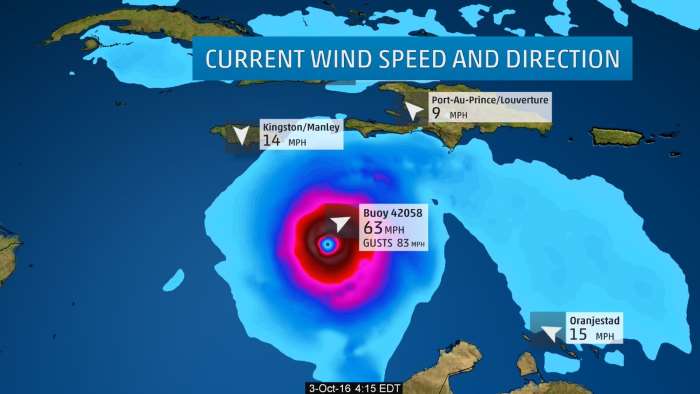 Hurricane Matthew's eye first came ashore in the Greater Antilles in the western Tiburon Peninsula of Haiti near the town of Les Anglais around 7 a.m. EDT Tuesday morning, according to the National Hurricane Center.

Matthew was the first Category 4 Haiti landfall since Hurricane Cleo in 1964, and only the fourth such intensity or stronger hurricane to track within 65 nautical miles of southern Haiti's Tiburon Peninsula since the 1960s, according to NOAA's Best Tracks Database.

Hurricane Matthew made a second landfall near Juaco, Cuba, around 8 p.m. EDT Tuesday evening. October 4. An unconfirmed wind gusts to 155 mph was reported in the town of Baracoa, Cuba, in Matthew's eyewall. 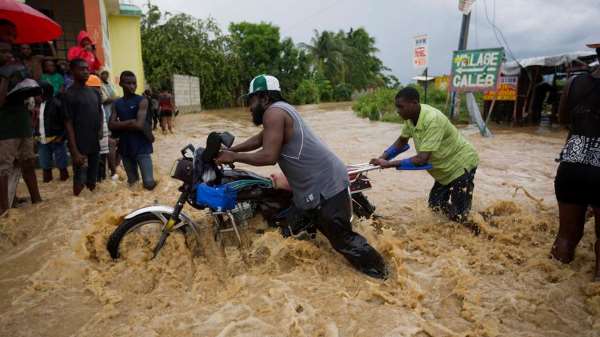 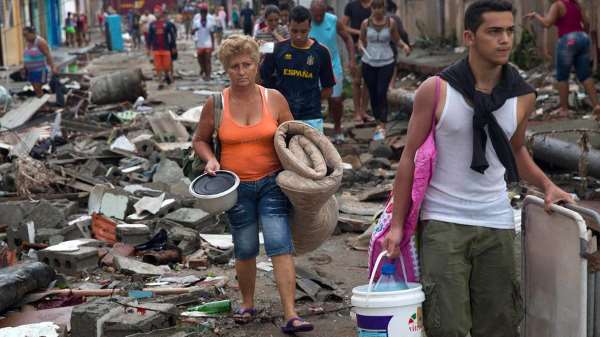 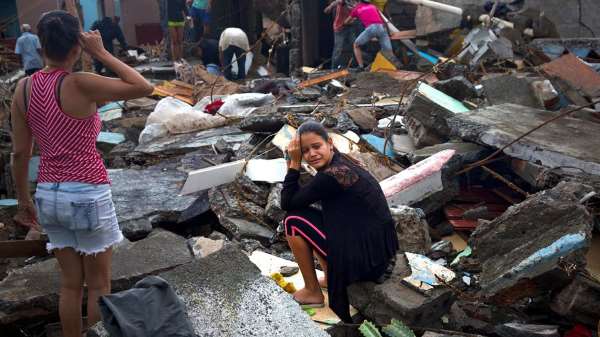