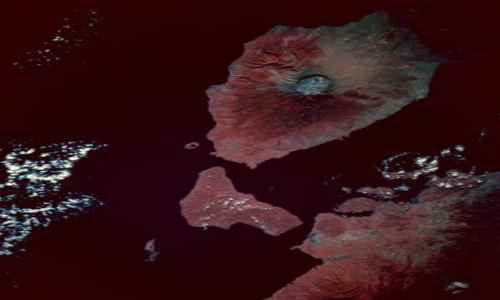 Space Shuttle image of Tambora (false color) taken in May 1992. The caldera from the 1815 eruption is clearly visible. NASA

In 2002 a 7.9 magnitude earthquake occurred in Central Alaska. The Denali fault, some 1,200 from Yellowstone ruptured sending shock waves south triggering hundreds of small earthquakes in The Yellowstone National Park.

Because this quake’s energy was focused toward the active Yellowstone volcanic and hydrothermal system, it triggered hundreds of small earthquakes there. The region’s hydrothermal system is highly sensitive to quakes and undergoes significant changes in their wake. Earthquakes may have the potential to cause Yellowstone’s hot-water system to destabilize and produce explosive hydrothermal eruptions. (source)

Fault lines, like cracks on an egg-shell, are often connected and movement, especially a large movement on one, can trigger a quake in another. This ‘knock on’ effect can often be felt over a huge area, or, alternatively, can shoot off in a given direction and influence events thousands of miles away.

So why worry about the effect of a major quake on Yellowstone?

Yellowstone National Park is one of the most seismically active areas in the continental United States. It is also home to the Yellowstone super-volcano, and scientists have proved that volcanoes and earthquakes can, on occasions interact,

This weeks earthquake in Ecuador for example, was preceded by an eruption of Tungurahua volcano just a couple of weeks before. No link has officially been made between the two events at this point, but such occurrences happen with alarming regularity all over the planet.

Each year between 1,000 and 3,000 earthquakes occur in Yellowstone. Most of them are minor but occasionally a larger temblor strikes. In 1959 a 7.5 occurred at Hebgen Lake, just west of Yellowstone National Park. It caused millions of dollars of damage and 28 people died in a landslide caused by the quake.

A year supply of stockpiled food may be overkill for most survival situations short of an apocalyptic event . However, if it helps you sleep better at night knowing you have a year’s worth of food stock on the premises, what’s that investment worth to you?

A super-volcano is defined as:

Scientists knew that the Yellowstone caldera was big, some even called it huge, but until recently they had no idea just how huge. The magma chamber is 50 miles long and 12 miles wide capable of holding 4,000 cubic kilometres of molten rock…that’s not huge, that’s truly massive.

A full-scale eruption of the Yellowstone volcano wouldn’t just affect the United States. Yes, hundreds of square miles would be buried under ash, which incidentally isn’t regular ash. Its full of microscopic glass particles as well as regular ash and other particulate matter. When inhaled it hits the lungs and sets like concrete as it adsorbs moisture from the body.

The effects of a major eruption though would spread much, much further than the ‘dead zone’ caused by the explosion. So much gas, rock and ash would be thrown up that it would literally circle the globe. once in the atmosphere a great deal of the sunlight that usually reaches the surface of the earth would be reflected back towards space, temperatures would drop, crops would fail, people would go hungry.

A good example of this is the 1816 explosion of the Mount Tambora super-volcano in Indonesia.

“The summer of 1816 was not like any summer people could remember. Snow fell in New England. Gloomy, cold rains fell throughout Europe. It was cold and stormy and dark – not at all like typical summer weather. Consequently, 1816 became known in Europe and North America as “The Year Without a Summer.” (Source)

The rumbling deep within Mount Tambora started on April 5th 1815, a full four months before the actual explosion. It was the largest explosion in recorded history. So much ejecta was thrown up that the sun was completely blotted out across Indonesia. Enough ash fell that buildings collapsed under the weight and the ash floated on the ocean, building into ‘ashbergs’ several feet in diameter and height, that ships had to push through to continue on their way.

Over several months the particulate matter blew across the world and within six months global temperatures had dropped by three degrees Celsius. Crops were affected, people thought the end of the world had come, and 1816 became known as the year without a summer.

According to scientists there are already 400 cubic km of magma in the Yellowstone magma chamber…EIGHT times more than Tambora.

California is waiting for ‘The Big one’ and it’s overdue. Should the Cascadia fault, the San Andreas fault, the Hayward fault or any other fault trigger a late enough earthquake there’s a considerable chance that it will trigger a swarm of minor earthquakes at Yellowstone, but what if one of those quakes triggers something a little larger and that in turn causes an uptick in the hydrothermal system at Yellowstone? What would a major quake do to the magma chamber? would rocks crack and fall into the chamber, melting and increasing the magma levels in the chamber?

Would cracks in the hydrothermal system tubes cause steam to get into the chamber creating a 50 mile by 12 mile pressure cooker that has no safety valve except to explode upwards and outwards to relieve the pressure?

A large earthquake is in itself a major disaster, add that to an explosion of a super-volcano and you have a cataclysm of biblical proportions that will affect every living thing on the planet in one way or another.