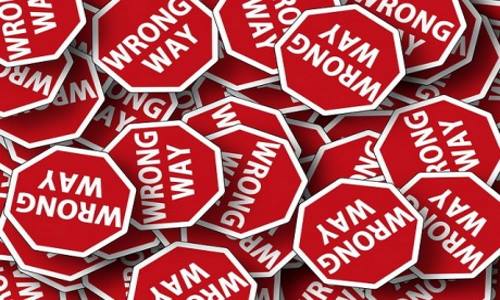 Americans appear to be increasingly pessimistic about the future of America.  According to a Real Clear Politics average of recent polls, 68.9 percent of Americans believe that the country is on the wrong track, and only 23.1 percent of Americans believe that we are headed in the right direction.  But if you have been listening to the endless parade of political speeches at the Democratic and Republican National conventions, you would be tempted to think that the greatest days for the United States are right around the corner.  The politicians keep promising us that better times are coming if we will just make the “correct” choices on election day, but no matter who we send to Washington D.C. things just seem to keep getting worse and worse.  Let’s take a look at just a few of the signs that indicate that our country is going in the wrong direction…

-The rise in violent crime: We haven’t seen crime rise this rapidly in our major cities in a very long time, and according to a report that was just released this week many forms of violent crime are way ahead of where they were at this time last year…

A new report published by the Major Cities Chiefs Association said that violent crime – homicides, rapes, robberies, assaults and shootings – is on the rise nationwide.

The troubling results, though just one survey, could provide vindication to Republican presidential candidate Donald Trump. President Barack Obama has contested Trump’s assertion– made prominently in his nomination acceptance speech last week – that crime is a national epidemic and major problem.

The mid-year violent crime survey, released Monday, shows307 more homicides so far in 2016, according to data compiled from 51 law enforcement agencies from some of America’s largest cities, including Chicago, Los Angeles and New York. There have also been 1,000 more robberies, approximately 2,000 more aggravated assaults, and 600 more nonfatal shootings in 2016 compared to this time in 2015.

-Police officers are being shot at a staggering rate: The number of police officers shot in the United States during the first half of 2016 was up 78 percentcompared to the exact same time period last year.

-Mass shootings: In just the past few weeks we have seen the worst mass shooting in U.S. history in Orlando, and there were mass shootings of police in Dallas and in Baton Rouge.

-The U.S. economy continues to crumble: We just learned that orders for durable goods fell again in June, Gallup’s U.S. economic confidence index just hitthe lowest level so far this year, and at this moment 43 million Americans are on food stamps.

-The U.S. consumer appears to be increasingly tapped out as the middle class shrinks: Most of the country is living paycheck to paycheck these days.  One recent survey found that 62 percent of all Americans have less than $1,000 in savings, and U.S. News & World Report is reporting that some analysts are projecting that we are heading for a “restaurant recession”…

Analysts are forecasting a “restaurant recession” in the U.S., which is bad news for America’s food and drink establishments and potentially even worse news for the economy at large.

He and his colleagues now “confidently believe” that the weak restaurant consumer spending seen in the second quarter of the year “reflects the start of a U.S. restaurant recession.”

-Business is not booming: The total amount of stuff our businesses have been selling has been declining since mid-2014, and it is being projected that corporate earnings will be down for a fifth consecutive quarter.  Earlier today, we learned that our biggest aircraft manufacturer, Boeing, has reported its first quarterly loss in nearly seven years.

-Government debt continues to explode: The U.S. national debt has hit a staggering 19.4 trillion dollars, and we have added an average of more than 1.1 trillion dollars to the debt since Barack Obama has been in the White House.

-Our politicians just continue to go from bad to worse: If you thought that the Obama years were bad, just wait until you see what Hillary Clinton can do.  The woman that the Democratic Party just nominated for president of the United States is one of the most evil, wicked and corrupt politicians the nation has ever seen.

-Everywhere you look, evil is exploding: The social fabric of our nation is coming apart all around us, and most of our men are hooked on pornography…

-Sadly, most Americans are way too addicted to entertainment to bother noticing that our nation is rapidly going down the toilet: In America today, millions of people would rather spend endless hours playing video games such asPokemon Go on their phones rather than getting involved in their communities.  And it is difficult to say that we even have “communities” anymore when most people spend far more time online than in face to face interaction with others.  If you can believe it, one recent survey found that half the population of the United States and Canada uses Facebook at least once a day.

I could go on and on, but hopefully you are getting the point.

The average American spends more than five hours a day watching television, and the television is telling them that everything is going to be just wonderful and that they should go out and vote for Hillary Clinton because she would be the first woman president and that would make history.

Meanwhile, our society is falling apart in literally thousands of different ways, and most Americans know deep inside that our country is deeply, deeply broken.  That is why more than two-thirds of us tell the pollsters that America is on the wrong track.  Virtually all of us know that something is seriously wrong with the United States, even if we can’t always agree on what the solutions should be.

Let us work very hard to wake our fellow Americans up while we still can, because time for turning this country in the right direction is rapidly running out.