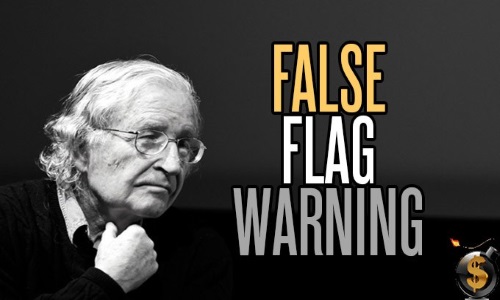 I heard yesterday that a famous anarchist had stated that he expected the Trump regime could conduct a false flag terror attack.

My first question was, “There’s a famous anarchist?”

It turns out that it was Noam Chomsky. And, no, he’s not an anarchist. He’s a big government communist. But it got my attention as we have also mentioned the likelihood of another false flag attack to be pulled off under Trump.

The second question I asked was, “Wasn’t it Chomsky who shilled for the US government saying 9/11 was a legitimate terror attack done by people in caves in Afghanistan?”

My memory served correctly, it was.

“Anyone who knows anything about the sciences would instantly discount the [supposed] evidence [presented by those who reject the official story].” Yet there were thousands of architects and engineers who spoke through Architects & Engineers for 9/11 Truth who explained in clear scientific detail, how the official story is an impossibility.

That minuscule number, at a minimum, starts around 2,100 for engineers and architects alone! That number doesn’t even include all the scientists and other professionals. Or anyone with even a modicum of common sense.

But, that was actually his response to Building 7! Yes, the 47 story skyscraper that wasn’t hit by a plane and collapsed at freefall speed into its own footprint roughly 20 minutes after the BBC announced it had suddenly collapsed.

So, either Chomsky is so unbelievably ignorant to not notice that 2 planes can’t knock down 3 buildings at freefall speeds… I don’t care how good of a bowler you are… and that there still is no evidence of a plane hitting the Pentagram… nor evidence of a plane in that field in Pennsylvania… either he is that unbelievably mind controlled or ignorant… or he is a government shill.

It’s one or the other. Pick one.

We’ll go with “shill” because no one could possibly be that oblivious to reality.

And, if he is a shill, then his comments on Trump preparing a false flag terrorist attack to take attention away from the economy is more interesting.

So if Chomsky is anything like the globalist he seems to be, it’s quite possible we might actually see a false flag attack being carried out soon.

It’s certainly not out of the realm of possibility. It’s not like it hasn’t been done before. It was done on September 11th, 2001… no one seems to notice, though. No one seems to care.

Trump said before he was elected, that he was going to reinvestigate 9/11. So much for that. It was forgotten along with almost all of his other campaign promises.

Instead, he’s gone ahead and through the State Department approved resuming arms sales to Saudi Arabia previously blocked by Barack Obama. And it is the Saudis who have been proven even by the US government’s own documents to have been heavily involved in 9/11. And now Trump is arming them.

If there is a massive false flag terror attack of the scale of 9/11 or bigger in the near future, there is one thing that is clear. The USSA will be locked down like an open air prison with Trump’s new growing military and police state. Why else would Trump place former Marine Corps General John Kelly in charge of the DHS?

Before that happens, you’ll want to not only have gotten a significant amount of your wealth outside of the US, but your physical self too. We can help you with that when you subscribe to The Dollar Vigilante (see more here) where we have TDV Groups across the world headed up by expats who saw the writing on the wall and already escaped for freer and safer pastures and can help you take those steps.

Whether it’s a false flag or just the long-expected collapse of the economy, something big is likely coming… and soon.

It never hurts to be prepared and to be a year early rather than a day late in doing so.

Anarcho-Capitalist.  Libertarian.  Freedom fighter against mankind’s two biggest enemies, the State and the Central Banks.  Jeff Berwick is the founder of The Dollar Vigilante and host of the popular video podcast, Anarchast.  Jeff is a prominent speaker at many of the world’s freedom, investment and cryptocurrency conferences including his own, Anarchapulco, as well as regularly in the media including CNBC, Bloomberg and Fox Business.  Jeff also posts exclusive content daily to the new blockchain based social media network, Steemit.