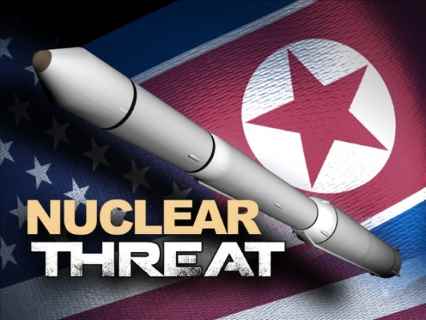 The American People are now Petitioning the White house to ask Congress for a DECLARATION OF WAR against North Korea over its nuclear threats!

North Korea threatened a preemptive nuclear strike against South Korea and the U.S., including the American homeland, over the two nations’ joint military exercises.

In a statement Monday on the official Korean Central News Agency (KCNA), Pyongyang said the annual military exercises were a pretext for war, and that the situation on the peninsula had been brought to a boil by last week’s United Nations sanctions against North Korea.

“If the enemies dare kick off even the slightest military action while vociferating about ‘beheading operation’ aimed to remove the supreme headquarters of the DPRK and ‘bring down its social system,’ its army and people will not miss the opportunity but realize the greatest desire of the Korean nation through a sacred war of justice for reunification,” the KCNA dispatch of a military statement said.

The dispatch referred to North Korea by its official name, the Democratic People’s Republic of Korea.

The attack will include nuclear weapons and their use against the U.S. proper, KCNA said in a rambling, florid statement.

“We have a military operation plan of our style to liberate south Korea and strike the U.S. mainland ratified by our dignified supreme headquarters. Pursuant to it, offensive means have been deployed to put major strike targets in the operation theatres of south Korea within the firing range and the powerful nuclear strike means targeting the U.S. imperialist aggressor forces bases in the Asia-Pacific region and the U.S. mainland are always ready to fire,” KCNA said.

KCNA then exulted in the consequences of such a war.

“If we push the buttons to annihilate the enemies even right now, all bases of provocations will be reduced to seas in flames and ashes in a moment and the U.S. imperialists’ nuclear strategic means on which the puppet forces depend as ‘saviors’ turn into piles of scrap iron whether they are in the air, seas and land … The army and people of the DPRK will make the gunfire of provocateurs in the reckless war of aggression sound as a sad dirge,” the North Korean press agency said.

The North also warned that its nuclear strikes will be “indiscriminate” in order to “clearly show those keen on aggression and war the military mettle of Juche Korea.”

In threatening what it called a “preemptive nuclear strike of justice,” KCNA went on its usual rhetorical flourishes about “how the crime-woven history of the U.S. imperialists” have created a country that has “grown corpulent.”

It also referred to South Korea as “the Park Geun Hye group,” saying that the South Korean president’s government is living its “disgraceful remaining days [that] will meet a miserable doom.”

PETITION FOR DECLARATION OF WAR

A Petition has begun on the White House web site, directing the President to ask Congress for a DECLARATION OF WAR against the Democratic People's Republic of Korea (DPRK) – the formal name of North Korea, for its repeated threats of nuclear attack upon the United States.(source)

The petition is available for your signature at: https://petitions.whitehouse.gov//petition/congress-declare-war-upon-north-korea-over-its-repeated-nuclear-threats-against-usa

How Powerful Is North Korea?

When the most isolated country in the world threatens a nuclear attack, there’s good reason for concern. North Korea may be off-the-grid globally, but their military manpower under Kim Jong-un is surprisingly strong. Just how powerful is North Korea? Is an attack on the U.S. likely?

Are you saved?  If not, what are you waiting for?