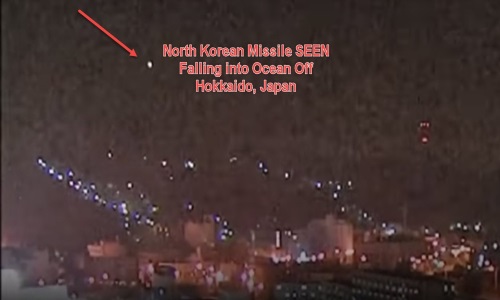 The latest illegal missile launched by North Korea toward Japan, fell so close to the northern Japanese city of Hokkaido, it was picked-up falling into the ocean by traffic cams and security cams in that city!  I have the video, below.  President Trump BLASTED China over their failure to assist with North Korea and stated bluntly "We will no longer allow this to continue."

Yesterday, North Korea again fired an illegal missile to test its ability to reach the continental United States.  By all estimates, North Korea now HAS the ability to hit Los Angeles, San Francisco, Seattle, Chicago and -possibly- Boston and New York City, if they fire over the North Pole instead of across the Pacific Ocean.

Weapons experts said that while the missile had a range of just around 1,000km, its apogee – the highest point it reached during flight – was up to 3,700km, during a flight  which lasted 47 minutes. By reaching over 3700km in altitude, it was more than high enough to achieve low-earth orbit, and thus steer a warhead to much of the continental United States.

As the North Korean missile came back down to earth, it was so close to northern japan that the TEST warhead – heated and glowing from re-entry into earth's atmosphere, was picked-up by Japanese Broadcaster NHK's cameras over Hokkaido.  Here is what the cameras picked up:

After fielding phone calls from the President of South Korea and the Prime Minister of Japan, and after seeing the video of how close this missile came to Japan himself, President Trump responded with an extremely blunt message via Twitter:

I am very disappointed in China. Our foolish past leaders have allowed them to make hundreds of billions of dollars a year in trade, yet…

…they do NOTHING for us with North Korea, just talk. We will no longer allow this to continue. China could easily solve this problem!

When a President of the United States says something, it is generally understood that he means it.  So when our President used the phrase "We will no longer allow this to continue" it triggered all sorts of alarm bells all over the world.

What did he mean?  Did he mean:

1) He will no longer allow China to continue talking us to death but doing nothing?

2) He will no longer allow North Korea to continue what it's doing?

Both possibilities mean MAJOR trouble ahead.

If the President meant #1, that he will no longer allow China to continue talking us to death but doing nothing– and this is the most likely meaning given the context of his message dealing with China making Billions thru US trading while doing nothing about North Korea — then the fastest option open to him is to immediately invoke 45% "Currency Manipulator" Tariff's upon all goods entering the US from China.

The Trump administration’s efforts to recast trade ties with Beijing suffered a setback earlier this month, when high-level economic talks between the two nations ended without any concrete agreement or future agenda.

After a full day of bilateral meetings, the U.S. side issued a terse statement saying that “China acknowledged our shared objective to reduce the trade deficit which both sides will work cooperatively to achieve.”  Between this stonewalling by China at trade talks, and their utter failure to assist with North Korea, President Trump seems ready to ring China's Bell in a big way.  Declaring them a Currency Manipulator and slapping a 45% Tariff on all Chinese goods would definitely ring China's bell!

This would utterly smash the Chinese economy almost overnight.  Chinese goods would instantly cost 45% more in the US, which would cut demand to almost nothing. With no demand, there will be no orders to Chinese factories for more products.  As orders from the US simply cease, Chinese firms will be forced to idle factories, putting hundreds-of-thousands out of work.

Sudden and vast unemployment inside China will lead to social instability if not outright chaos.  Whatever the results, it's very bad news for a whole slew of people.

If the President meant #2, that he will no longer allow North Korea to continue what it's doing, then that means military action.  There is no other possible interpretation.  And Military action means re-opening the Korean War, which ended by Cease Fire (Armistice) as opposed to a Peace Treaty.

All the Use-Of-Force authorizations from the original Korean War, remain in-place.  The President would merely have to give the order to attack, and the whole slaughterhouse starts all over again.

While the context of the Tweets may deal with either meaning listed above, news broke here in the US this morning that in South Korea on Saturday, "persons known to work for the South Korea  government began telling people in Seoul to "prepare to evacuate" if certain developments take place."  The specific details of when those citizens were told to "stop what you're doing and leave the city immediately are reported here. (Subscribers only)

Seoul is within artillery range of 18,000 North Korean artillery guns, and those guns could rain down half a million shells an hour onto Seoul, a densely populated metropolis with more than ten million people.

With North Korea's artillery buried deep in caves along mountainsides, it would take literally DAYS for airstrikes and rocket or artillery fire from South Korea and the US, to finally take out the guns attacking Seoul, but the death toll in the city could easily number in the hundreds-of-thousands in those few days.

So the world has finally arrived at a point where the US President says "We will not allow this to continue."  What comes next is anyone's guess.  Will it be "Currency Manipulator" designation for China, with the ensuing Tariff's?  Or will it be military action?

Either way, folks should prepare.  This week in the stock and bond markets is likely to be very volatile. And if military action is the route to be taken, prepare for catastrophe on several levels.