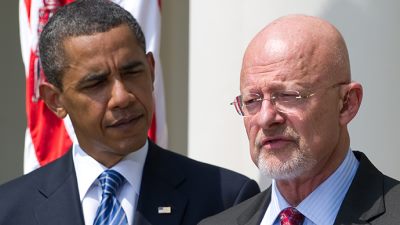 Despite calls from Congress to fire Director of National Intelligence James Clapper for lying under oath, United States President Barack Obama says that the spy chief should have just been a little more careful with his words.

Clapper, the 72-year-old retired Air Force lieutenant general in charge of the nation's intelligence departments, caused a commotion last year when he was caught lying during sworn testimony delivered to the Senate.

Answering to Sen. Ron Wyden (D-Oregon) during a meeting of the chamber's select committee on intelligence last March, Clapper claimed that the National Security Agency does “not wittingly” collect and store data on American people. When former contractor Edward Snowden proved him wrong through leaked NSA documents weeks later, though, Clapper was forced to take back his words. He later apologized to committee chairperson Sen. Dianne Feinstein (D-California) for what he called a “clearly erroneous” remark, and insisted he gave simply the “least untruthful” answer he could give in an unclassified setting.

Clapper's comment has continued to attract criticism nearly a year later — and more than seven months after the first Snowden disclosures showed how wrong he was. When Pres. Obama finally opened up about the ordeal this week, though, he far from sided with the critics who have been calling for Clapper's termination.

“I think that Jim Clapper himself would acknowledge, and has acknowledged, that he should have been more careful about how he responded,” Obama told CNN in an interview that aired Friday. “His concern was that he had a classified program that he couldn’t talk about, and he was in an open hearing in which he was asked, he was prompted to disclose a program, and so he felt he was caught between a rock and a hard place.”

“As I said in the speech that I gave a couple of weeks ago, what’s clear is that we are going to have to do a better job of being transparent about what we do, to have a robust public debate about what we do,” Obama added. “But it’s going to take some time. It’s going to take some work, partly because the technology has just moved so quickly that the discussions that need to be had didn’t happen fast enough, didn’t happen on the front end.”

Obama wasn't the only one to endorse DNI Clapper this week, either. Former United Nations ambassador John Bolton appeared on Fox News late Thursday, and hailed the intelligence director for comments he made this week before Congress.

Clapper was again on the stand earlier this week when he spoke of the current terror threats facing the US, and said those dangers had become more “disperse” than ever as extremists groups grow in size and scope.

"This is a stunning statement by James Clapper. You can't underline it enough,” Bolton responded.

That isn't to say that the entirety of Washington's elite is ready to shower Clapper with applause. When the spy chief found himself back before the Senate Intelligence Committee earlier this week on Wednesday, Sen. Wyden hardly shied away from referencing last year's now infamous gaffe. While grilling Clapper once again about the American intelligence community, Wyden said, “I don’t think this culture of misinformation is going to be easily fixed.”

Wyden's latest showdown with Clapper came just two days after Pres. Obama was sent a letter from Rep. Darrell Issa (R-Calif.) is and five other members of Congress asking for him to take action against the DNI for his "clearly erroneous" remark.

“The continued role of James Clapper as director of national intelligence is incompatible with the goal of restoring trust in our security programs and ensuring the highest level of transparency,” they wrote.