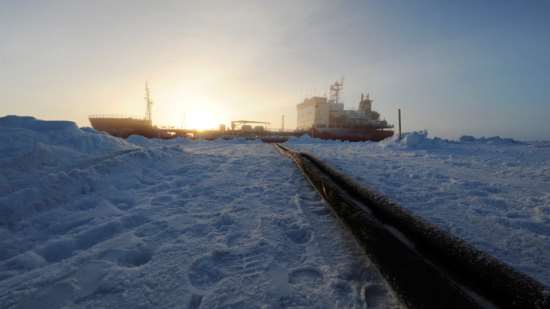 A new study says there is a lack of both scientific data and preparedness on the part of private and public entities to properly address an oil spill in the Arctic Ocean, which global powers and industry expect to exploit for energy exploration.

Climate change is thawing sea ice in the Arctic, opening up new opportunities for energy development. Approximately 30 percent of the world’s undiscovered natural gas and about 15 percent of its untapped oil lie in the Arctic. But the majority, 84 percent, of the estimated 90 billion barrels of oil and 47.3 trillion cubic meters of gas remain offshore.

Waiting for eager energy developers are some of the world’s most extreme weather conditions “and environmental settings, limited operations and communications infrastructure, a vast geographic area, and vulnerable species, ecosystems, and cultures,” the National Research Council wrote.

The five countries with territorial claims in the Arctic – Canada, Denmark, Norway, Russia, and the United States – have stated intentions to develop these reserves, if they haven’t begun already.

Yet the National Research Council’s new study – funded by US federal agencies and the leading trade group for the oil industry, the American Petroleum Institute – found that energy companies currently lack Arctic oil spill response plans, as it is their responsibility to address such an event. That said, public entities often take the lead in spill response actions, yet the US government does not have infrastructure capabilities in place despite its rush to establish dominance in the region.

“The lack of infrastructure and oil spill response equipment in the U.S. Arctic is a significant liability in the event of a large oil spill,” the report states. “Building U.S. capabilities to support oil spill response will require significant investment in physical infrastructure and human capabilities, from communications and personnel to transportation systems and traffic monitoring.”

The “significant investment” on infrastructure could come from public-private partnerships, the report suggests, though the politics of offering industry further subsidies may be problematic.

Adequate research into what awaits industry in the extreme cold of Arctic waters is also lacking, the report said. There is little understanding of how the low temperatures would affect both spilled oil and commonly-used techniques to reverse the effects of a spill, such as the spread of chemical dispersants. The report goes as far as suggesting that the only way to know is to conduct a controlled oil spill.

“Laboratory experiments, field research, and practical experience gained from responding to past oil spills have built a strong body of knowledge on the properties of spilled oil and response techniques. However, much of this work has been done for temperate regions,” the report reads.

“There is…a need to validate current and emerging oil spill response technologies in Arctic environmental conditions on operational scales. Carefully planned and controlled field releases of oil in the U.S. Arctic would improve the understanding of oil behavior [the Arctic] and allow for the evaluation of new response strategies specific to the region.”

Shell has spent $6 billion so far in ultimately unsuccessful Arctic drilling operations, Mint Press Newsreported. It was an incident in 2012, involving a Shell oil-drilling rig, that has provided the starkest indication of what lies ahead for companies in the region.

In a rush to avoid an upcoming tax liability about to go into effect, Shell decided to drag its top rig, the Kulluk, around 1,700 miles through frigid Arctic waters despite warnings from the tow ship’s captain.

The Kulluk, reportedly carrying 150,000 gallons of fuel, eventually broke free from the towing ship floating off into an ecologically-sensitive area. The rig and its crew had to be rescued by the US Coast Guard, which recently released a report on the incident that slams Shell for “inadequate assessment and management of risks.”

“Vessels and the operations they conduct are growing more complex, and the risks that accompany these operations increase, whether in Alaskan waters or not,” wrote Joseph A. Servidio, a Coast Guard rear admiral, in the report. “The failure to adequately understand, respect, and not complacently assume past practice will address new risks, is critical both in practice and in company culture.”

According to the United Nations' sea convention, any country has sovereign rights to resources within 200 nautical miles of its territorial waterways.

The five countries with territorial claims have long preached cooperation in the region, going as far as setting up an Arctic Council that the nations take turns leading. In 2015, the US will assume the leadership role as a warming planet has opened up new opportunities. These commercial interests worry advocates of ecologically-intelligent approaches to the Arctic.

“The Arctic Council should be a forum focused on protecting the Arctic environment, yet we see it more and more talking about protecting economic interests in the region,” John Deans, an Arctic campaigner with Greenpeace USA, told Mint Press.

Deans said that for his organization, which has environmental interests in mind, the lack of scientific information about Arctic drilling consequences is a red flag, yet governments and industry are highly unlikely to slow their pace.

“In our view, if you don’t know enough about a place – in this case, what either an oil spill or a response would look like – then you really shouldn’t be up there to drill in the first place,” he said.