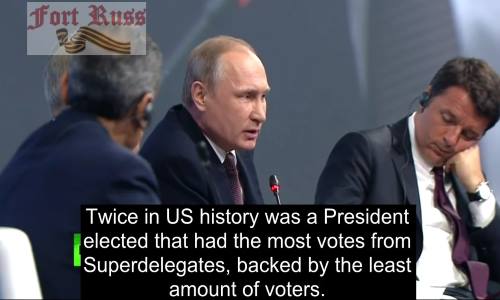 By Stefan Stanford – All News Pipeline – Live Free Or Die

In the outstanding video below which is now seeing some attention across the alternative media but will probably never be touched upon by most of the mainstream media, Russian President Vladimir Putin completely unloads upon Fareed Zakaria of CNN fame while telling him, among many other things, that AT LEAST two US elections have already been stolen, a warning to Donald Trump of what may be coming with the entire 'new world order' now on the line. Putin immediately calls out Zhakaria for the way he categorized previous Putin comments, showing us once again, that those working within the mainstream media are well trained at twisting the words coming from the mouths of others for the benefit of the nwo.

While the recent story over at SHTFPlan tells us that the US is sleepwalking towards a nuclear confrontation "in our astounding stupidity", we hear directly from the leader of the nation that the US is regularly antagonizing…and who could completely destroy America within an hour by delivering an EMP attack upon us that there is no way that we could stop, sending America back to a time without electricitiy, internet, running water, utilities, a banking system, and devoid of much of government except for the 'continuity of government' which would by then be living in their snug little bunkers underground in Denver. 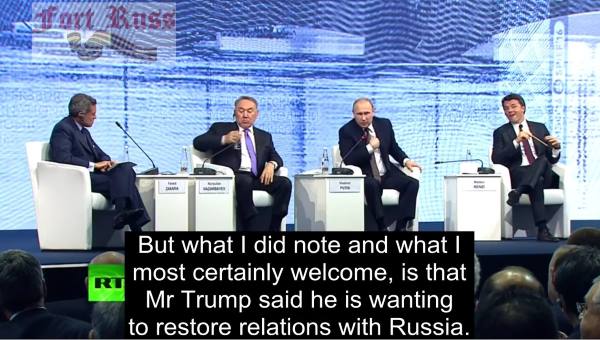 In this eye-opening video, Putin completely destroys the thuggish policies that the Obama administration has had towards Russia (not to mention towards the American people) and we learn why Donald Trump could be 'the light at the end of the tunnel' in wanting to have healthy and good relationships with Russia. Why WOULDN'T the Obama administration want 'healthy relationships' with Russia? As anybody who listens to this video can hear, Putin is NOT looking for war with the US but respectful relationships. Why would we be preparing for war against them that would lead to our total destruction?

Putin drops several bombshells on us all in this video, sending a loud and clear warning that AT LEAST 2 US elections have already 'been stolen' bringing up the absolutely abominable 'super delegate' process that is not only a kick in the teeth to every American voter across the country but shows, beyond a shadow of a doubt, that our voting system is rigged against the will of the American people.

While Hillary Clinton is still running for president rather than in prison, she and the rigged system have kicked every Bernie Sanders voter in America in the face, basically telling them that they don't count nor do their votes. Think about that Bernie Sanders voters reading this…the proven war criminal, who not only has American BLOOD ON HER HANDS but who is accepting BLOOD MONEY from dictatorial regimes that slaughter gays, is basically stabbing in the back every member of the LGBT community, Black Lives Matters, and everybody else on the left who voted for Bernie Sanders by PROVING to them that their votes don't count. Hitlery could care less about you or any of us. I personally would vote for Bernie in a second flat over lying, crooked Hillary though I long ago learned our votes don't count in this rigged system. 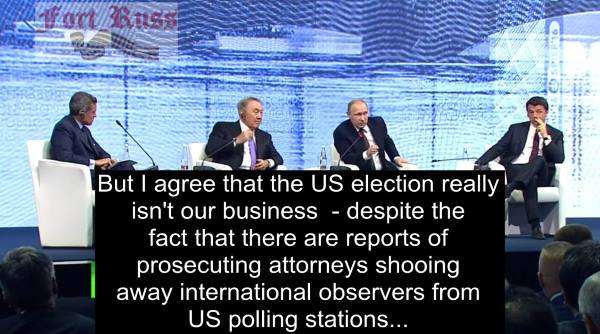 It's clear that Mr. Putin knows that US elections are rigged as well and as we hear in this video, he sends what could be looked at as a very, very clear warning to Donald Trump in this video: "Crooked Hillary WILL steal this election from you, too….so watch your back!" As anyone who has been following the Clinton's outside of the mainstream media already knows, the list of the dead that follows them everywhere they go is legendary and the absolute corruption surrounding them proves this family is the last family on Earth that Americans want or need back in the White House. If most of America really thinks that lying, crooked, war-criminal, blood-money Hitleryis the 'change we need', maybe they haven't looked at her disastrous record already in the Middle East and Benghazi. If Clinton is the 'change we need', maybe America deserves the 'date with destruction' the globalists have been pushing us towards.

As we have warned over and over and over again on ANP, Hitlery is clearly the globalists candidate as she's promised to open US borders within 100 days of being elected, thus providing us with the final, fitting 'end of America'. We have also warned that if the globalists feel that they are about to 'lose America', they will pull off the biggest false flag attack ever….putting an end to the elections and possibly keeping Obama in office.

If they can't steal the election via the Diebold machines they control, the globalists will steal it by either taking down Trump or pulling off some kind of a BREXIT-style false flag such as the recent horrific shooting in the UK that may have been carried out by a mind-controlled MK-ultra slave and one that very well may keep the UK in the European Union if recent polls are correct showing a monumental shift since the killing of Jo Cox.

Listen to Mr. Putin… he tells us that Russia stays out of the US's business, though he drops another bombshell on us in telling us that those from the international community who would like to monitor US elections have been forced away by US prosecutors, so we should stay out of Russia's business, too. However, like the ever-present and brutish 'big brother' that US government has become, it continues to poke the Russian bear…over and over and over again….almost as if US leaders and this administration WANT Putin to respond and completely annihilate us so we can completely annihilate them. 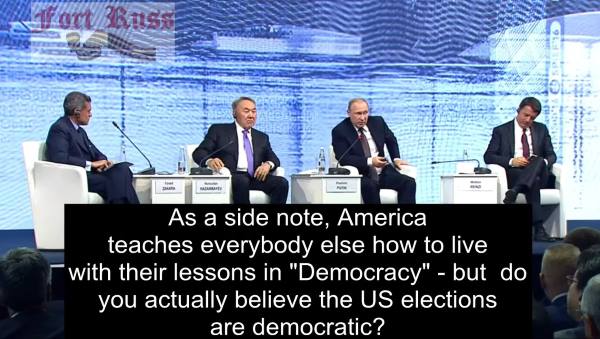 Putin clearly doesn't want to send the US back to the dark ages…he wants to build strong relationships with us…how this administration responds over the next few months will tell us if the US gets into 2017 alive and well or in a total and utter chaos. Putin also shows us why Americans need to get rid of this administration that has totally sucked up to the  'new world order' before they completely destroy us via NATO's belligerence towards a country that clearly has no ill will against the American people.

While we certainly understand that Putin was the prior head of the KGB and no angel, the leadership that he has displayed in Russia through this ongoing crisis should be commended, especially in comparison to what we've gotten from the administration here.

This video could also be looked at as a final warning to America…try to get it right this time because lowly scum are preparing to steal another election from you and send you into another downward spiral that will lead to your Republics utter destruction, thus, completing the process of what the globalists running American into the ground today want anyways.

And just how and when America will fall … everything you took for guaranteed … you current lifestyle, the comforts of life and America will be erased of the face of the earth.. World War 3 will hit by.2017…And this is the only real solution for you and your loved ones… 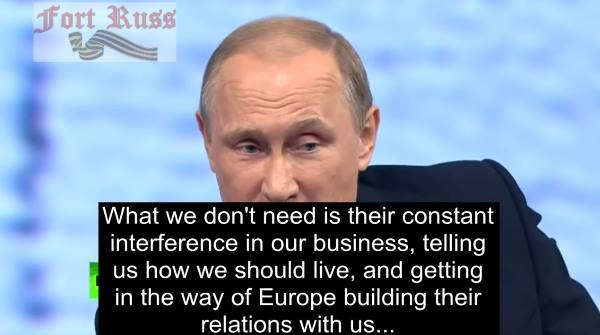 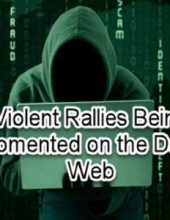 This Friday: Violent Rallies Planned for 37 US Cities – being promoted on the Dark Web! (We have the list)