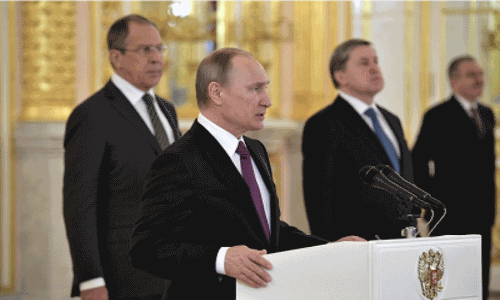 On Thursday afternoon, Russian President Vladimir Putin welcomed 18 new foreign ambassadors to Russia during a ceremony at the Alexander Hall of the Grand Kremlin Palace.

Although such events are usually little more than ceremonial formalities, Putin used the opportunity to encourage all nations to work with Russia towards the creation of a "fair" world that respects "cultural diversity" and "national sovereignty":

Russia opposes attempts to destabilise and weaken international relations, as this could lead to a chaotic and ever less controllable slide towards greater tension in the world.

We support joint action to ensure a democratic and fair world order based on strict respect for the norms of international law, the United Nations Charter, recognition of the unquestionable value of cultural and civilizational diversity, national sovereignty, and the right of all countries to decide their futures freely, without external pressure.

The international situation does indeed require improvement. This calls for restraint, wisdom and responsibility. I would like to reiterate that Russia supports joint efforts to resolve the real problems facing the entire international community today.

Putin also stressed that Russia seeks international relations and cooperation based on consensus and respect, noting that Russia "does not divide its partners into big and small. Every country has its own value in our eyes, and with every country we are ready to pursue an equal dialogue and build cooperation on a constructive basis of mutual respect."