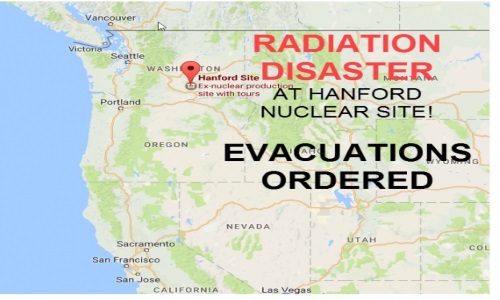 A train tunnel containing radioactive fuel rods and other highly radioactive products has COLLAPSED at the Hanford Nuclear Site in Washington State. Employees have been evacuated,the "Emergency Operations Center" has been activated; and now, the Federal Aviation Administration (FAA) has imposed a NO-FLY ZONE 5 miles in all directions from the site! ! ! !

People nearby are being told to close windows, seal-off ventilation systems and worst of all DO NOT EAT OR DRINK until the extent of the massive radiation release can be determined!

The Hanford Site is a mostly decommissioned nuclear production complex operated by the United States federal government on the Columbia River in the state of Washington.

Hanford for decades made plutonium for nuclear weapons and is now the largest depository of radioactive defense waste that must be cleaned.

It contains about 56 million gallons of radioactive waste, most of it in 177 underground tanks.

The collapse occurred at one of two rail tunnels under the PUREX site.

In the past, rail cars full of radioactive waste were driven into the tunnels and then buried there, he said.

Hanford has more than 9,000 employees.

The site was built during World War II and made the plutonium for most of the U.S. nuclear arsenal, including the bomb dropped on Nagasaki, Japan, at the end of the war.

This is a major nuclear disaster with developments by the minute.

According to the United States Environmental Protection Agency (EPA) – their "RADnet" system for monitoring radiation throughout the USA is now showing a fast rise in radiation levels in the entire Richland, WA area, where the Hanford Nuclear Reservation is located.  Below is a screen shot from the EPA's Geiger Counter readings showing more than 100 point spike in local Gamma radiation levels, and those levels are still rising rapidly: 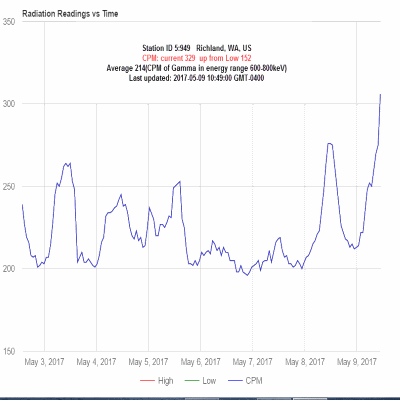 To provide readers with a better frame of reference for the affected area, statewide, regional and local maps appear below: 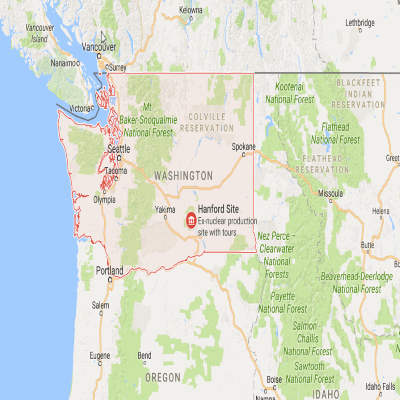 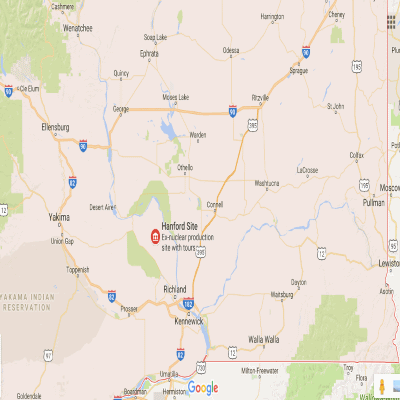 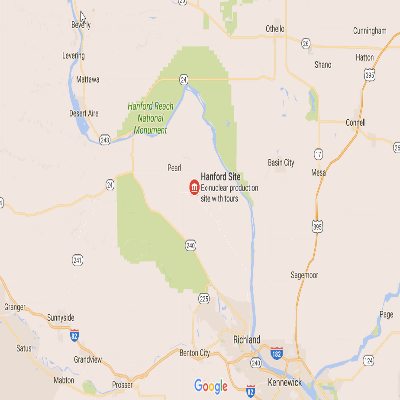 Hundreds of workers are in "take cover" position after a tunnel in a plutonium uranium extraction (PUREX) plant  collapsed at the Hanford Nuclear Reservation in the state of Washington early Tuesday morning local time.

Reports say no workers were in the tunnel at the time of collapse. Workers at the site have now been evacuated. Workers farther away were told to remain indoors.

A manager sent a message to all personnel telling them to "secure ventilation in your building" and "refrain from eating or drinking." 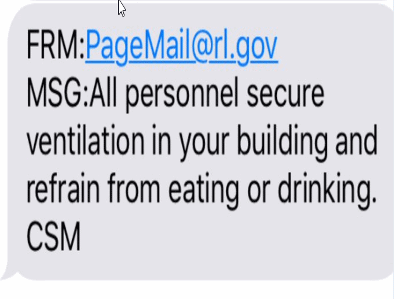 The tunnel was full of highly contaminated materials such as hot radioactive trains that transport fuel rods. It connects to a PUREX (plutonium uranium extraction) building.

Below is the official statement from the federal government regarding this emergency.  Bear in mind that all times mentioned are LOCAL (Pacific Time Zone):

NOTE: While the official statement above claims no sign of radiation release, this is directly contradicted by the EPA RADnet readings showing radiation in the area is already up 100 counts-per-minute (CPM) and still rising!

About an hour ago — 10:30 am local time — the "take cover" order for employees at the Hanford Site was EXTENDED TO THE ENTIRE SITE which is about half the size of Rhode Island.

About 3,000 workers have taken cover at the "200 East Area" of the sprawling complex, local media reported.

SuperStation95 has also just learned that, despite claims to the contrary, about 61 workers were inside the tunnel when the collapse took place.

The Federal Aviation Administration (FAA) has just enacted FLIGHT RESTRICTIONS banning all aircraft from flying below 4,000 feet within two miles of the Hanford site!

The neighboring state of OREGON has just activated its Office of Emergency Management, declaring a "Level 2" Emergency which puts their Emergency Operations Center on Stand-by.

SuperStation 95 can confirm the FAA has imposed a NO-FLY ZONE in a five mile radius around the Hanford nuclear site in a Notice-To-Airman released just minutes ago, shown below: 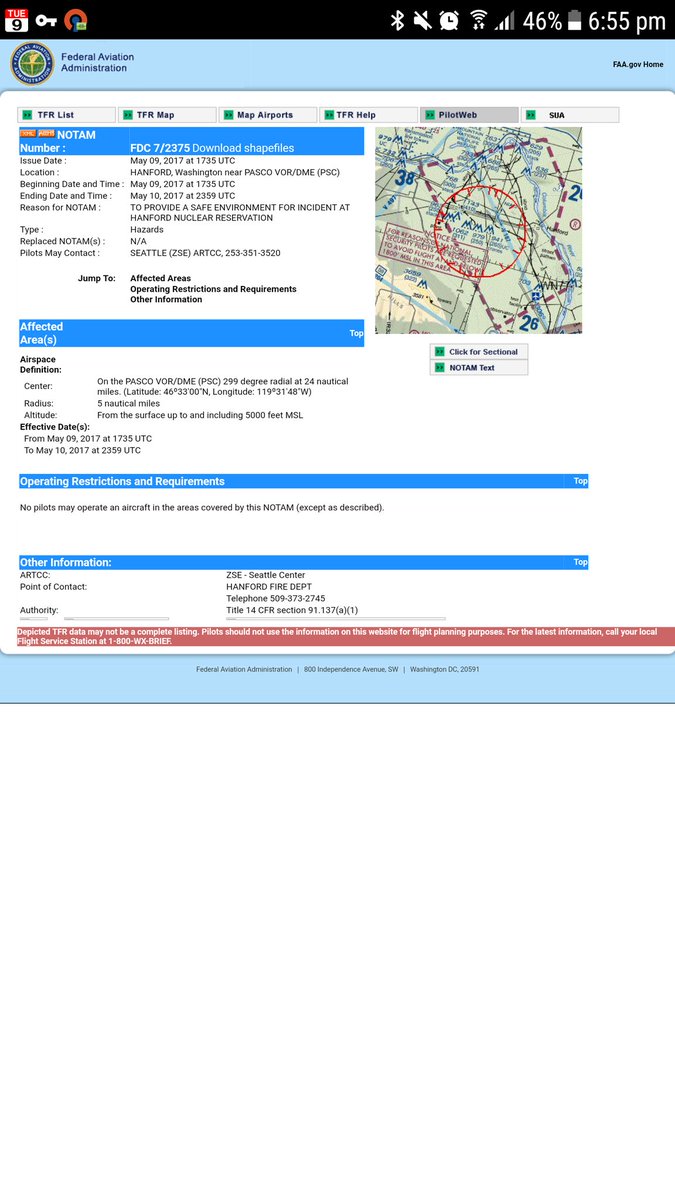 Weather satellites in space are showing which way the winds are blowing in relation to the ongoing situation at the Hanford site.  Folks that may be in the path of "whatever" may be emanating from Hanford, should decide for themselves whether to take any precautions or even to leave.

While local, state and federal authorities operating at the Hanford site admit there is a "small" radiation reading from the incident, in past incidents, it came out years later that government officials failed to disclose the actual facts until years after an incident took place. Their argument has always been "we didn't want people to panic."

Given this reality, we are publishing the wind direction in the Hanford area and providing a link for people in that area to see the satellite models themselves: 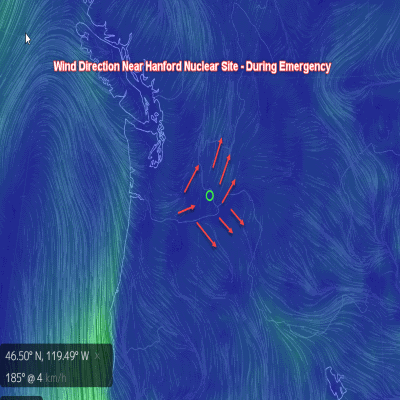 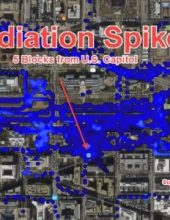