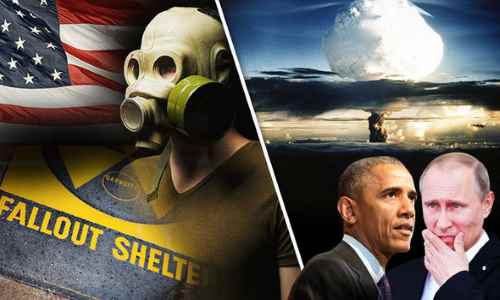 Putin informed the Western world that Russia will develop a secret weapon to counter US advances. This was said in response to the US missile defense system that was being developed at the time (previously prohibited in international law.) Russia’s counter-measure weapon is now almost complete. With the NATO missile defense system on Russia’s doorstep – the threat to international security is very real; not that you would know it via mainstream Murdoch media.

In 2002, the United States unilaterally and without consultation, withdrew from the landmark Anti-Ballistic Missile (ABM) Treaty. President George W. Bush noted that the treaty is “now behind us,” describing the ABM Treaty as a Cold War relic.

Signed in 1972, the ABM Treaty barred both the US and the USSR from deploying national defenses against long-range ballistic missiles. The treaty was based on the premise that if either superpower constructed a strategic defense, the other would build up its offensive nuclear forces to offset the defense.

The superpowers would therefore quickly be put on a path toward a never-ending offensive-defensive arms race, as each tried to balance its counterpart’s actions. Until Bush took office, the Treaty was referred to as a “cornerstone of strategic stability” because it facilitated later agreements, reducing U.S. and Russian strategic nuclear arsenals.

The US, assuming that a weakened Russia will never again be in a position to counter US hegemonic power, proceeded to encroach on Russia’s borders through its manipulation of NATO objectives.

Today, there is no instrument in international law that prevents the possibility of mutually assured destruction. Putin has been sending out warnings for over 10 years – all of which fell on deaf ears. Who will push the button first?

READ MORE : Time To Pay Attention — In The Last 48 Hours, Humanity Just Moved To The Brink Of World War

THE US could be edging ever closer to nuclear war with Russia after upgrading its attack defence readiness, it has been claimed.

DEFCON is an alert system used by the US military to indicate the current threat of nuclear war.

The system has five states of alert, increasing in severity from DEFCON 5 – the least severe – to DEFCON 1 – the highest level.

Currently, the levels is understood to be at 5.

But conspiracy theorists have warned the threat has secretly been upgraded two levels to DEFCON 3 – meaning the US could mobilise troops in as little as 15 minutes.

The level was last upgraded to 3 in the aftermath of September 11, 2001 – with standby ordered for a potential rise to DEFCON 2.

Now website DEFCON warning system claim it has been upgraded again in a terrifying revelation.

While there are currently no imminent threats to the US, it claimed the situation is “fluid and can change rapidly.”

However it also highlighted the dying relationship between the US and Russia, citing concerns of all-out warfare between the bitter rivals.

A statement posted on its website read: “Tensions between Russia and the United States have reached levels beyond the cold war in the recent week.

“The situation between Russia and the United States is extremely fluid at the moment. In all likelihood as dynamic as at times during the Cuban Missile Crisis of 1962.

“At this time, the DEFCON Warning System feels that an increase to DEFCON 3 would be a prudent move.

Russian citizens have been encouraged to find bomb shelters and gas masks today, as state-sponsored infomercials on television gave out guidelines on how people should prepare for a nuclear attack.

President Vladimir Putin meanwhile has ordered the evacuation of 40 million people in a military drill.

He also transferred nuclear-capable Iskander ballistic missiles to one of its strategic Baltic regions last week, in what officials claim was part of regular military manoeuvres.

However many world leaders fear the moves are being carried out in preparation for war.

The conspiracy theory site warned citizens to prepare for any potential conflict, saying: “This is a very sensitive situation which has the potential to spiral out of control.

“It is recommended that all citizens learn the steps to be taken in the event of nuclear war.”

Theorists have even claimed a move to DEFCON 2 is being muted, based on Putin’s call for Russians to return home.

Though the threat of war seems to be rising, the DEFCON level indication reported by the website is only speculation.

The US military do not share the actual DEFCON status  with the public for obvious security reasons.

17 Items you’ll Regret Not Having Enough Of When SHTF

A RETURN TO THE OLD PATHS: HOW TO MAKE PEMMICAN LIKE THE NATIVE AMERICANS
20 LOST RECIPES FROM THE PIONEERS: WHAT THEY COOKED IN THEIR JOURNEY WESTWARD

Expert Dr Paul Craig Roberts Warning Real Possibility of Armageddon : WE ALL MIGHT BE DEAD SOON – Why PUTIN is the TRAITOR of the NEW WORLD ORDER!!?? (2016 DOLLAR COLLAPSE and tension on SYRIA !)

5 Critical Actions to Take After Shooting Someone

The Health Benefits Of Licorice You Have Never Heard Of!