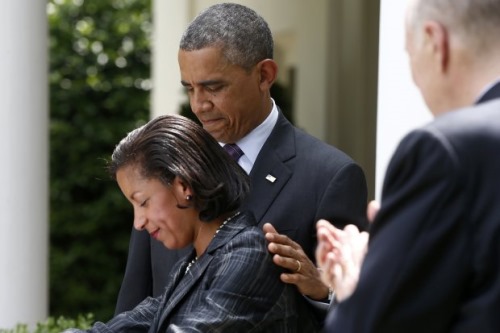 WASHINGTON (AP) — Once seemingly destined to become secretary of state, Susan Rice now holds a lower-profile job at the White House, juggling global crises for the president and trying to ensure his foreign policy priorities don't fall by the wayside in a storm of overseas problems.

She shows no bitterness about the turn of events that short circuited her diplomatic trajectory. As President Barack Obama's national security adviser, she commands a suite of offices steps from the Oval Office and has more daily access to him than does Secretary of State John Kerry.

Kerry travels the world and gets the headlines. Rice quietly orchestrates the foreign policy issues put on Obama's desk.

These days, Rice has been keeping a list of issues at risk of being ignored: a trade agreement with Asia-Pacific nations, development projects in Africa, protecting gay rights overseas.

She's sent the list around to some of those on the 400-person National Security Council staff she oversees. She holds weekend meetings when necessary to keep tabs on issues that may have gotten overshadowed by Mideast instability or Russia's threatening moves in Ukraine.

The approach shows the degree to which Rice, who's nearing the end of her first year in the White House, sees herself as the point guard in a game rapidly nearing the final buzzer.

"It is a very important part of my job, particularly at this stage in the president's tenure, to not just be fighting fires and the headlines, which to some extent is unavoidable, but to make sure that the things he cares about — his legacy interests, issues, accomplishments — are nurtured and carried into the end zone," Rice said in an interview. "We are trying to put points on the board."

Yet the fires have come fast and furious, even on the day Obama announced he was shifting Rice from United Nations ambassador to national security adviser.

Hours after the Rose Garden ceremony, the first leaks from Edward Snowden were published online, sparking a months-long review of the government's spy practices and angering U.S. allies caught up in the sweeping surveillance operations.

There's been little respite since, often throwing the White House into a reactive posture.

The week Rice officially took over as national security adviser, Egypt's military ousted the country's first democratically elected president. That crisis was quickly overshadowed by a Syrian chemical weapons attack and the White House's rush toward a military strike that ultimately was scuttled.

Now it's the instability in Ukraine that has consumed much of the foreign policy focus in the White House.

"I don't have the luxury of saying, I'm going to do these three things and I'm going to put most of my eggs in these baskets," Rice said, adding that when it comes to the foreign policy decision-making process, "I've got to run the whole show."

For many, Rice remains best known for her role in the controversy surrounding the deadly 2012 attack on Americans in Benghazi, Libya.

Days after the assault, she was dispatched to five Sunday talk shows to make the case that the onslaught on a U.S. compound was spontaneous and spurred by anger over an anti-Islam video — a CIA-crafted talking point that turned out to be wrong.

Rice quickly became the prime target for Republicans who accused the Obama administration of covering up the truth about the attack in order to protect the president's re-election prospects.

People close to Rice say the experience was a searing one for the hard-charging diplomat who had led the push for the international bombing campaign that led to Libyan leader Moammar Gadhafi's ouster.

A year before the attack on the U.S. compound, Rice had received a hero's welcome during a visit to the Libyan city, where crowds held signs that read "Thank You Susan Rice" and a huge banner flew in the city's Freedom Square bearing a photograph of Rice voting in favor of the bombing campaign at the United Nations.

Rice's success in securing support for the Libya mission had helped put her on a glide path toward a nomination for Obama's second-term secretary of state. But the Benghazi attack derailed those plans. GOP senators threatened to block her nomination and Rice eventually withdrew her name from consideration.

The 49-year-old is at the helm of the administration's foreign policy decision-making, overseeing meetings with Cabinet secretaries and other top officials, then winnowing down which recommendations land on the president's desk.

For Rice, it's a far different role than her post as U.N. ambassador.

During four years in New York, she earned a reputation as an outspoken and competitive diplomat who may have bruised some egos on the Security Council but also had a noticeable impact on Obama's foreign policy, from pushing the Libya campaign to successfully securing tough penalties against Iran and North Korea.

Rice's influence on Obama's foreign policy has become harder to discern since she moved into the West Wing.

She's rarely the administration's chief public advocate for policy decisions, a role she leaves to Kerry or even her deputy, Ben Rhodes.

While she does some media interviews, her public comments are often limited to the occasional speech or posts on Twitter, where she has one of the administration's most widely viewed accounts with about 380,000 followers.

Rice says her lower profile is by design.

Turning as she often does to a sports analogy, Rice compared her current role to that of a basketball point guard — the position she played on her high school basketball team and the code name assigned to her by the Secret Service.

"I'm setting up the play," Rice said. "I have to see the whole court. I'm usually running the play but passing it to somebody else."

"In the U.N., I'm a shooting guard. I'm taking the three-pointer from the outside often," she continued. "And it's very evident whether I hit it or miss it."

When asked for examples of Rice's influence on Obama's foreign policy, administration officials cited her role in finalizing an interim nuclear deal with Iran.

They also said that as the scope of Snowden's document trove became apparent, Rice pushed the White House to be more agile in responding to the leaks and correcting mischaracterizations. Officials said she's pressed to keep North Korea's nuclear provocations from becoming a back-burner issue.

Both liberal and conservative interventionists were hopeful that Rice's appointment, in conjunction with the nomination of former journalist and advocate Samantha Power as her successor at the United Nations, signaled that Obama was ready to take a more proactive approach to solving that crisis.

Much attention was paid to a comment Rice had made in one of Powers' books, where she recalled her involvement in the Clinton administration's slow response to the Rwandan genocide. Rice is quoted as saying that if she ever faced such a crisis again, "I would come down on the side of dramatic action, going down in flames if that was required."

Rice did back Obama's plans last year to launch a targeted military strike on Syria and raised concerns when the president decided to instead seek congressional approval, a bid that floundered.

But her presence in the West Wing appears to have done little to shift the overall trajectory of Obama's response to the civil war, which continues to focus on slow but steady humanitarian assistance and moderate military assistance to the vetted opposition.

Sarah Margon, the Washington director of the advocacy organization Human Rights Watch, said rather than become more proactive over the past year, "the administration has taken an increasingly cautious approach to foreign policy and human rights."

Rice's supporters inside the West Wing say she has purposely tried to be less of an advocate for her own positions and more of an honest broker in representing to the president a range of available options.

They also say she takes seriously her role as head of the National Security Council, where she first started her career in government during the Clinton administration.

In a symbolic but important move to many on her staff, she restored the council's name after Obama changed it to the National Security Staff. She also plays host to happy hours and the occasional dance party, with Rice playing DJ with her iPod.

Denis McDonough, the White House chief of staff, recently tried to get into the team-building mix, suggesting a basketball game between his office and Rice's staff. But McDonough said the competitive Rice is yet to accept his offer.

"She said she wanted some time to practice," he said.