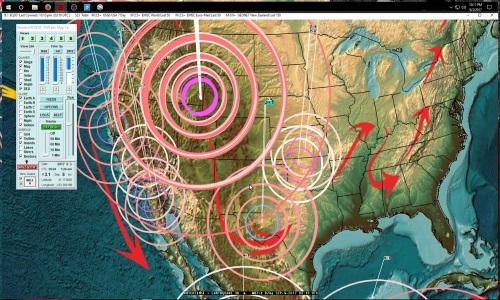 According to a group of seismologists who are monitoring the potentially catastrophic supervolcano, Yellowstone is “under strain.” This new report has reignited fears that the caldera could erupt at any moment.

Experts were alerted to the volcano’s strain after noticing deformation. This process, where subsurface rocks subtly change shapes, is occurring beneath the surface of Yellowstone right now. Researchers state deformation occurs when there is a change in the amount of pressure in the magma chamber and experts are keeping an eye on the development.

A raft of earthquakes measuring above magnitude-2.0 have been recorded at Yellowstone, in the US state of Wyoming, during the past 24 hours.

The largest earthquake measured 2.9 on the Richter Scale and struck at a depth of 9km at around 6am on Sunday.

Though fairly small, the flurry of seismic activity at the 3,500-square mile volcanic hotspot highlights the unstable nature of the landscape.

All of the earthquakes struck near Hebgen Lake in western Yellowstone, home to gushing geysers, dramatic canyons and a dangerous underground volcano.

Seismic activity is relatively common at Yellowstone and the magma chamber underneath is not thought to be at risk of an imminent eruption.

Seismologists from UNAVCO, a non-profit university-governed consortium, are using “Global Positioning System (GPS), borehole tiltmeters, and borehole strainmeters” to measure minute changes in deformation at Yellowstone. In an article for the Billings Gazette, David Mencin and Glen Mattioli, geodesists with UNAVCO, say “the strain signal is larger than would be expected if the crust under Yellowstone were completely solid.”

“What that means, at least in their eyes, is that there’s lava flowing that’s allowing pressure to build in the chamber,” says Joe Joseph of The Daily Sheeple.  “I don’t know if this is good or bad!” (Story continues below Ad)

These independent observations agree with other instruments at Yellowstone, like seismometers, that indicate a zone of semi-molten rock starting about 3 miles beneath the surface. The term “semi-molten” is used because the entire zone contains only between 5 and 15 percent liquid rock that occupies small pockets of space between the solid rock.

But the scientists want to assure the public that these observations are no cause for alarm. “Of course, they’re always gonna say that,” says Joseph. “It’s about 700,000 years ago they say when it erupted and it’s long overdue. So here we are, Yellowstone, yet again, thrust into the news because of some of this new data coming out…,” Joseph said.

If the Yellowstone volcano nestled mostly in  Wyoming were to erupt, an estimated 87,000 people would be killed immediately and two-thirds of the USA would instantly be made uninhabitable.  The large spew of ash into the atmosphere would block out sunlight and directly affect life beneath it creating a “nuclear winter.”