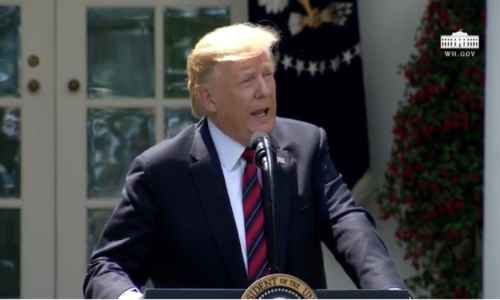 GMOs and their related chemical pesticides have long been pushed heavily by establishment Republicans. That’s another important reminder why it’s good to never be swept into a political party. Rather, evaluate each candidate based on their principles and actions.

Even though Trump is far from an “establishment” Republican, to the frustration of health-conscious Americans, he just signed an executive order that might as well be called “the GMO Streamlining Act.” As reported by the Associated Press, this executive order directs federal agencies to reduce or eliminate regulations and oversight mechanisms that might help ensure the safety of genetically engineered crops.

In other words, President Trump just ordered the federal government to turn American into a massive GMO experiment where anything goes. “The move comes as companies are turning to newer genetic engineering techniques that make it easier to tinker with the traits of plants and animals,” reports AP, meaning that regulations are being dropped at exactly the moment in history when easy, low-cost genetic modification methods such as CRISPR are rapidly emerging, placing GE technology into the hands of small companies and even determined individuals.

Under the new rules, modern-day GMO corn and soybean crops would have never been subjected to safety testing at all. As AP reports:

Last week, the U.S. Department of Agriculture proposed changing its regulations in a way that would mean much of the genetically modified corn and soy grown in the U.S. today would not necessarily have been subject to special oversight.

In addition, the new streamlining would relax regulatory oversight of genetically engineered animals. One of my concerns in all this is that genetic engineering without limits would enable the launch of “animal organ factories” where animals are subjected to extreme cruelty as they grow organs for transplantation into humans, all to the benefit of the organ harvesting and transplant industry.

The second Trump betrayal of health freedom and food transparency

This move by President Trump signals the second significant betrayal of health-conscious Americans. His first betrayal revolves around vaccines and the issue of medical consent. While Trump expressed skepticism during the 2016 presidential debates about the safety of multiple vaccines administered to infants and children, he flipped during the recent measles scare, urging Americans to “get the shot.” As Information Liberation reports:

Remember how when Trump was running for president, he met with Robert F. Kennedy and said he would have him chair a commission to investigate vaccine safety?

Just as with his promised executive order on birthright citizenship before the midterms, his promised vaccine safety commission never materialized.

With Trump now seemingly siding with Monsanto / Bayer over the near-deregulation of genetically engineered foods, his second betrayal of health-conscious consumers will have many people asking what’s coming next. Will Trump promote Big Pharma’s mass drugging of children with psychiatric drugs? What corporate chemical horror will Trump back next?

Will anyone in charge stand up against corporate greed?

In fairness, had Hillary Clinton been elected president, there’s no question she would have aggressively pushed GMOs and mandatory vaccines, all while covering up her own deep-rooted corruption and repeated abuses of government power. Regardless, those of us who care deeply about health freedom and clean food must now begin to question Trump’s authenticity as a candidate who promised to challenge the status quo and drain the swamp.

When it comes to science, there is no deeper or swampier swamp than the GMO industry and its long history of fake science, intimidation of journalists and payoffs to government regulators. By signing this executive order, Trump just poured more putrid swamp juice right into the swamp.

Trump has arguably stood against the establishment on many important issues, but if he’s going to blindly push GMOs and vaccines while utterly failing to take any decisive action against the coordinated tech censorship of independent media, he’s going to lose the election in 2020 as his former supporters lose faith in his proclaimed mission. None of us who supported Trump as an “outsider” in 2016 are going to feel compelled to vote for him again if he’s beholden to establishment corporate interests. And if he doesn’t solve the techno-fascism censorship issue before the 2020 election, he’ll lose it for that reason anyway.

If there is no candidate that gets people excited about the 2020 election, then intelligent people will stay home and not vote at all, in which case the Democrats win from the sheer numbers of fraudulent illegal left-wing voters, and America will collapse into San Francisco-like conditions of high taxation, human feces running in the city streets, and an authoritarian police state that controls what you are allowed to think, speak, watch or share. This is the overt goal of the left-wing fascists who currently run the tech monopolies that dominate online speech. They have already demonstrated they have zero respect for individual liberty, freedom of speech or the rule of law.

Why is it so hard for a political leader to support safe food and medical choice?

Those of us who care deeply about health freedom and food transparency do not make unreasonable demands. We simply want vaccines to be a choice, not a gunpoint mandate. And we want safety oversight on genetically engineered foods and pesticides, along with honest food labeling.

As a counter-argument to all this, by the way, if genetically engineered foods could be planted by anyone without any real government regulation, then Monsanto / Bayer might stand to lose its dominant market position due to new market entry by small organizations. Effectively, reducing regulations could drastically reduce barriers to entry in the GMO industry, allowing smaller, lesser-funded companies to introduce seeds and crops that would take revenues away from Bayer and other GMO giants. But the environmental risks that could be unleashed in such a scenario might be catastrophic, given that genetically engineered crops are self-replicating, non-natural organisms which are being planted in open fields and would therefore spread with unknown consequences that could conceivably cause tremendous economic harm to U.S. agriculture in the long run.

We’ll watch closely and see where this is going. But as I’ve always said, we are not blind worshipers of any political leader. We support people based on their principles and their actions. Simply stated, if President Trump is going to push GMOs and vaccines, then he is abandoning the people. It’s very difficult to explain this away as some form of “4D chess” where Trump would one day flip it all around and cause powerful corporations to lose money from the sales of their toxic crops and agricultural chemicals. Far from 4D chess, this action by Trump looks a whole lot more like a simple 1D sellout.

Sound off in the comments below and tell us what you think. Help us send notice to President Trump that we demand safe food, honest labeling and medical choice… and that if he cannot support these fundamental principles rooted in basic human rights, he does not deserve to represent us as Americans.

Homesteading is the only (legal) way I know of to become almost completely self-reliant from the food corporations, the utilities companies, the Government and Big Pharma… by harvesting hundreds upon hundreds of dolars of organic food year-round, and collecting thousands of gallons of crystal-clear drinking water for free…

To take back your health by growing your own groceries, and making your own food out of basic ingredients, such as cheese, bread and even chocolate to name a few…

Then you could stockpile the excess produce for dark days… (The shelf life of ingredients is longer than that of the resulting foods, anyway…) So while other preppers pay thousands for overpriced, highly-processed “emergency food”, you’ll build your survival stockpile for free…

It’ll be like having your own personal supermarket just a few feet away from you… Though not the kind that sells processed meat full of hormones and steroids, veggies full of pesticides that have absolutely no taste at all, not to mention and all the other junk full of preservatives…