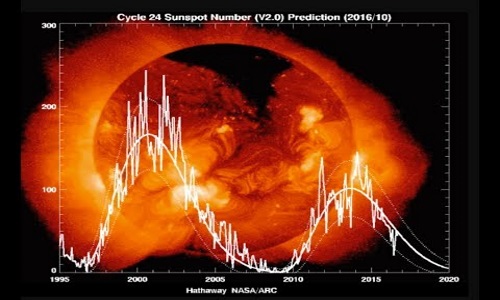 We have power outages all the time. In fact, I think it's actually a good thing because nobody panics. But if the power went out for a few days in the middle of winter it would be a different story. I'm prepared for that scenario but the vast majority of people are not. They would make it about one day and then panic would set in.﻿

The surface of the sun exploded. Huge, bright flares spewed out into space like powerful fountains colorfully lit from beneath. Within a few hours, the solar storm bombarded Earth with a shower of positively-charged hydrogen atoms, called protons, causing scientific and communications satellites to short-circuit. Through a series of chemical reactions in our atmosphere, the protons drastically diminished the upper-most areas of the ozone layer, a protective blanket mostly in the stratosphere that blocks life-threatening ultraviolet radiation from reaching the Earth. This shower of protons, known by solar science insiders as the Bastille Day event, was the third largest of its kind in the last 30 years.

Atmospheric scientist Charles Jackman and a team of researchers from NASA’s Goddard Space Flight Center and Hampton University in Virginia recognized a rare opportunity to gather further proof that solar storms destroy ozone. They already knew that when protons bombard the upper atmosphere, they break up molecules of gases like nitrogen and water vapor. Once freed, those products readily react with ozone molecules and reduce the ozone layer. So, Jackman and his colleagues recalled specific Northern Hemisphere atmospheric data from NASA and National Oceanic and Atmospheric Administration (NOAA) satellites that continuously monitor the composition of gases and molecules that surround our planet.

Their findings, published in the August 1, 2001, issue of Geophysical Research Letters, show that less than one percent of total atmospheric ozone in the Northern Hemisphere can be quickly reduced by one of these events. “It is an indication of the power of the sun to actually affect the atmosphere in a sudden, cataclysmic way,” Jackman says. While the results do not show a significant impact on human health, especially considering that most of the ozone loss documented in this study occurs over the northern polar region, they are important scientifically. The study gives detailed and quantified knowledge of how a solar storm affects upper-level ozone. As scientists race to better understand humankind’s role in ozone loss, they must first be able to tease out the natural causes.

“A lot of impacts on ozone, like those caused by humans, are very subtle and happen over long periods of time,” says Jackman. “But when these solar proton events occur you can see immediately a change in the atmosphere.”

Jackman explains that ultraviolet radiation from the sun continuously strikes the upper atmosphere. These harmful ultraviolet rays would make life on Earth impossible if it weren’t for the ozone layer that absorbs the radiation. Ozone forms when three atoms of oxygen bind together to create a single molecule (O3), but when ozone absorbs ultraviolet radiation, the molecules split apart into a single free oxygen atom, and an oxygen molecule of two tightly bound oxygen atoms (O2). O2 is the oxygen we breathe, and it makes up about 21 percent of the Earth’s air.

“The free oxygen atom is so reactive and there is so much O2 around, that out of 1001 times that this reaction occurs, 1000 times it will reform,” Jackman says. As a result, day-to-day break down of ozone by ultraviolet radiation doesn’t affect the overall amount of it in the atmosphere. “The only way to destroy ozone is for that free atom of oxygen to reform with something else,” Jackman says.

That’s where solar proton events enter the picture. When protons from the sun hit the atmosphere they break apart both water vapor and nitrogen gas, which accounts for 78 percent of our atmosphere. The nitrogen gas molecules (N2) disconnect and leave two free nitrogen atoms. Nitrogen atoms are highly reactive with O2, creating oxides of nitrogen. Once formed, these molecules can last for weeks to months depending on where they end up in the atmosphere before they get destroyed. Protons also break up water vapor (H20) into a hydroxide molecule (OH) and a free-floating single atom of hydrogen. Both of these products also react easily with ozone and reduce its levels in the atmosphere. Fortunately, oxides of hydrogen are short-lived and only stay together as long as the rain of protons keeps coming.

Scientists like Jackman regularly try to improve their computer models to more accurately simulate the atmosphere, and, in this case, to better determine present ozone levels and to predict future amounts. In order to do that, they must account for daily, short-term and long-term variations caused by different factors. “Solar proton events help us test our models,” Jackman says. That’s because they offer quick, verifiable results that can then be used to test model-based predictions.

Jackman says that prior to his study scientists had good measurements of ozone levels during solar storms, but they didn’t have as comprehensive a measurement for the effect that protons have on nitrogen oxides (NO and NO2). This study documents actual levels of destruction, by taking readings of ozone and nitrogen oxide levels before and during the event. “Every ninety minutes, we had a new measurement of nitrogen oxides, so we could watch them develop as the solar proton event developed,” Jackman said. Scientifically speaking, the change in the amounts of nitrogen oxides and ozone was huge in the uppermost regions where ozone lies. And those were the areas where the computer models had some inaccuracies, Jackman said. Most of the damage is done near the top of the atmosphere because it takes a lot of energy for protons to penetrate to lower atmospheric regions. Fortunately for us, much less ozone exists at these heights.

Based on his prior experience with protons and ozone, when the solar storm broke on July 14 and Jackman saw the huge proton fluxes measured by another NOAA satellite, he says that he knew right away this was a unique opportunity to gather data. “The big solar storms don’t really occur that often, and this event was off the charts,” he says. “So we knew if we looked we’d have something.”

The atmosphere’s layers include the troposphere, the stratosphere, the mesosphere and the thermosphere. The troposphere lies closest to Earth at zero to nine miles up, and the thermosphere floats furthest away at about 60 miles up. Ozone is distributed over these layers. About 90 percent lies within the stratosphere, and most of that amount-over 80 percent of the total ozone-stays in the middle and lower stratospheric regions. Around 9 percent can be found in the troposphere, and the remaining one percent sits in the mesosphere.

“If you look at the total atmospheric column, from your head on up to the top of the atmosphere, this solar proton event depleted less than one percent of the total ozone in the Northern Hemisphere,” Jackman said. While that doesn’t sound like a lot, scientifically speaking the numbers for the specific atmospheric regions are quite significant.

“This is an instance where we have a huge natural variance,” Jackman says. “The ultimate goal of a lot of our work is to understand the human impacts on ozone. In order to do that, you have to first be able to separate the natural effects on ozone.” 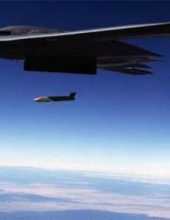 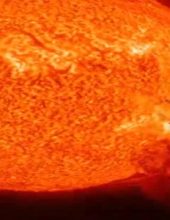