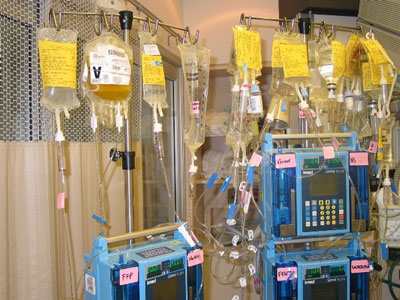 For months now hospitals across America have been suffering extreme shortages of saline and other injectible IV drugs which is compromising the health of patients. According to the FDA on March 28, 2014, “Due to the shortage of 0.9% sodium chloride injection (normal saline) Fresenius Kabi USA, LLC of Lake Zurich, Ill., will temporarily distribute normal saline in the United States from its Norway manufacturing facility. FDA is temporarily exercising enforcement discretion for the distribution of Fresenius Kabi USA’s normal saline product while it is needed to address this critical shortage that directly impacts patients.”

This story has been reported by the mainstream news on more than one occassion, but without context and without consideration of everything else going on in the US and across the world.

Fox said there are only four companies that make all the drugs used in the country’s hospitals and many of the manufacturing plants have production issues in part, due to equipment that is often decades old. “They can’t ramp up production fast enough to eliminate the shortage,” said Fox.

Many believe the US, in fact the world, is about to erupt into World War III, a scripted war, where Syria, Turkey, Ukraine, Russia, America, China, Japan and others are all involved in squirmishes, tensions and outright battles.

What does hospital shortages of life saving injectible drugs have to do with war?

Via a Steve Quayle Alert, we see the answer to this:

Dear Steve, I spoke with you on the phone recently from Texas regarding the interaction that I had with the person the picks-up my garbage. I work as a doctor (hospitalist), in west Texas and we have been experiencing severe shortage of IV solutions like normal saline, dextrose with water and medications such as solumedrol (a potent steroid), that are indispensable for patient care. Actually our hospital pharmacy has not been able to purchase normal saline iv solution nor dextrose with water for several weeks now. Our pharmacy is being told that this is also taking place in other hospitals throughout the country and they do not have a timeline for these items to be available again. This is clearly worrisome, the few times that I have seen this take place is just before a war, not even before a natural disaster. I think this is extremely important since these are very basic supplies that are much needed in a hospital and without them patient care is compromised.

Something big is about to take place Mr. Quayle, really BIG!….

As readers will see below,  news reports discuss the shortage but none even hint or ask whether there is another reason that these shortages, seen for months now, are happening and whether they could be the result of the government stockpiling in preparation for a massive world war.