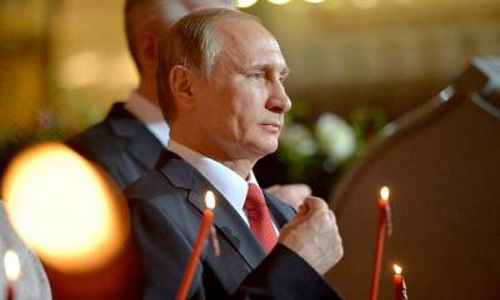 When I was a young boy back in the 60s, the Soviet Union was THE menace—a horrible place where the unspeakable was everyday life. Their leaders were evil, their people drunk and stupid, their way of life backward and they could destroy the U.S. with the push of a button.

The civil service drills of scurrying under your desk at school with the sound of an alarm that drilled terror into a young boy went well, from what I remember. We'd nervously look at each other and then peer out from under our desks, looking for our teacher, who was either under her desk or down the hall getting a quick cup of coffee. Who knew for sure.

Parents back then shook their head with worry or disgust, or both, when "that" country was mentioned. The Soviet Union, the "Red menace", home to communists who sought to take us over and do unimaginable things to us—that was the message. Even a picture of a bear could invoke images of mushroom clouds exploding overhead.

Of course, nothing nuclear happened, though there were those close calls (the Cuban Missile Crisis) but thankfully, the cooler heads (along with luck) of JFK and Khrushchev prevailed and the world was saved from catastrophe.

With the assassination of JFK, the Cold War became solidly entrenched in American geopolitical operations and allowed the military/security complex to flourish. The more nuclear weapons the USA had the better. Military expenditures for the USA during the Cold War are estimated at $8 trillion.

The 80s saw an end to the Cold War, with the dissolution of the Soviet Union in the early 90s. A simplified explanation of this unexpected dream being that the US economy had more resiliency than the Soviet economy, coupled with President Reagan's support of the mujahideen (holy warriors) in Afghanistan that cost the US $1 Billion annually, and 8 times that amount for the Soviet Union.

With the revitalization of Russia under Vladimir Putin, a new and vibrant Russia has emerged. As history has shown, never underestimate Russia.

But now, the Washington lunatics have gone back to the days when I was a kid, shouting from the rooftops, laptops, TV screens and from the mouths of nearly every deranged politician and media personality that Putin is on a campaign to destroy democracy in the U.S (Newsweek). The article was on par with Newsweeks' recent glimpse into Putin's mind. I was disappointed though, as the writer didn't extend Putin's demonic Jedi mind tricks to include replacing hamburgers and hot dogs with vodka and borscht.

The red boogieman is back and thank the war gods it is—how else to justify total "defense" expenditures of $824.7 Billion for Fiscal Year 2018 if you don't have a devious enemy?

Even writers critical of Washington, such as Paul Street’s recent article on CounterPunch and the English language Russian website, Strategic Culture Foundation, cannot bring themselves to state the truth that the US military/security complex needs a major enemy, has elected Russia for that role, and intends to defend this orchestration to the end of humanity on earth.

Street writes about “How Russia Became ‘Our Adversary’ Again.” According to Street, Russia became the enemy of choice because Russia protected part of the world’s population and resources from being exploited by global capital. Russia became the number one enemy of the US also because Putin stopped the American exploitation of Russia economically. Putin is in the way of Washington’s exploitation of the world.

And Putin has done what any sane leader of a country would do—protect the nation he leads from economic ruin and moral degeneration. To quote Putin:

Without the moral values that are rooted in Christianity and other world religions, without rules and moral values which have formed and been developed over millennia, people will inevitably lose their human dignity.

AND RUSSIA THINKS IT IS RIGHT AND NATURAL TO DEFEND AND PRESERVE THESE MORAL VALUES.

When Washington and their media slaves (or is it vice-versa) hears of such talk, they first soil themselves, then start their hyena-like chorus of derision, proclaiming that such moral values are outdated and exclusionary, especially in an advanced, progressive and tolerant country such as the USA, that tolerates anything and everything, except moral values.

Washington’s exploitation of the world continues—thankfully, Russia continues to resist.

Decker writes for DispatchesfromtheAsylum.com, a website dedicated to observing various modern day absurdities, nuttiness and insanity and ripping them apart via the written word russia-insider.com/ 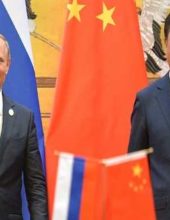