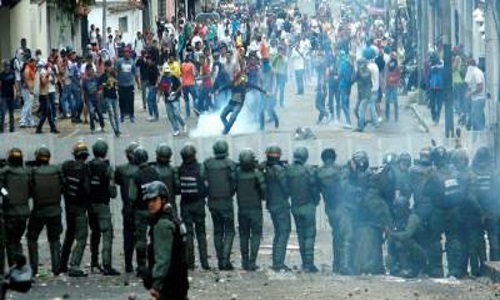 There’s no denying that Venezuela is deeply embroiled in a significant crisis. While most are aware of the country’s recent string of violent protests, food shortages and government crackdowns on opposition protesters, few are aware of the opposition’s use of underhanded and downright illegal tactics, as well as the United States’ role in funding opposition forces.

The U.S. has long had its sights set on Venezuela, which possesses the largest proven oil reserves in the world, particularly following the “revolution” that began with the election of the late President Hugo Chávez and has continued under his successor Nicolás Maduro.

But changing circumstances within Venezuela may soon push the U.S. to repeat a nefarious practice it has carried out elsewhere – funding a proxy war in order to prevent Venezuelan oil from falling into Russian and Chinese hands.

At first, the U.S. government seemed content to let Maduro’s administration run out of steam on its own. But the U.S. has already issued separate sanctions against the country three times this year alone, with more planned in the coming months, as evidenced by the introduction of a recent U.S. Senate bill that would target Venezuelan government officials.

The bill, titled “Venezuela Humanitarian Assistance and Defense of Democratic Governance Act” (S.1018), would funnel $20 million to the Venezuelan opposition, which has already received an estimated $50 to $60 million since Chávez’s election in 1998.

And now, the stakes may now be too high for the U.S. to allow Maduro’s regime to collapse under the weight of economic sabotage. By all accounts, Venezuela’s state-owned oil company PDVSA is already on the brink of collapse.

While this would normally be good news for those who seek to see Maduro toppled, there is a caveat that is causing panic in Washington. As the text of S.1018 points out, PDVSA – if and when it collapses – would default on its $4 to $5 billion loans from Rosneft, Russia’s state-owned oil company.

Although Russia and Venezuela enjoy a political alliance, Russia has already taken action over the unpaid debt. In April, a Russian state-run shipping company took $30 million in Venezuelan oil hostage over PDVSA’s unpaid debt. Rosneft would likely follow suit in the event of a major default.

If such an event were to occur, it would mean that Rosneft would take control of a substantial part of PDVSA. But what is more troubling to the U.S. than Russia’s potential control over the world’s largest oil reserves is the fact that one of Russia’s loans to Venezuela came with the condition that PDVSA offers Rosneft a 49.9-percent stake in Citgo as collateral.

As the text of S.1018 makes clear, Citgo – PDVSA’s U.S. subsidiary – “controls critical energy infrastructure in 19 states in the United States.” It seems doubtful that the U.S. establishment would sit back while Russia comes into possession of an ownership stake in one of its largest petroleum refiners.

In addition, Venezuela has underwritten many of its loans from China with an oil-for-credit framework, again meaning that a Venezuelan default would mean that significant amounts of Venezuelan oil could also pass into Chinese hands. It seems unlikely that the U.S. would let its two greatest rivals to global hegemony claim the world’s largest oil reserves.

The U.S. is eager to avoid playing a direct role in preventing their worst-case scenario. However, now that the stakes are higher, the U.S. has already begun setting the stage for a potential proxy war.

In addition to funding Maduro’s opposition, the U.S. is set to lead a multilateral military drill in South America that will involve the installation of a temporary military base on the triple border shared by the drill’s other participating nations: Peru, Brazil and Colombia.

BBC Brasil reported that the drill will give the U.S. the “opportunity” to focus on Venezuela’s political situation. In addition, as Telesur reported, President Donald Trump has already met with the presidents of Peru and Colombia to discuss the U.S.’ interest in Venezuela.

With the U.S. funding the Venezuelan opposition and gearing up to lead a multi-nation military drill in close proximity to Venezuela, the foundation for yet another U.S.-Russia proxy war over fossil fuels is being laid.

Worth mentioning here is the fact that Maduro’s government is armed largely by Moscow. Between 2005 and 2013, Venezuela was the largest purchaser of Russian weapons in Latin America and the estimated value of Russia-Venezuela arms deals clocks in around $12 billion.

Alternatively, were the U.S.-funded opposition in Venezuela to take control following a default by the current administration, they would likely deny Russia and China their promised collateral of Venezuelan oil at the behest of their long-time donors in Washington. It is highly unlikely that Russia and China would willingly surrender billions of dollars of oil and money to a U.S. puppet regime.

Either way, crisis-stricken Venezuela may soon find itself in an even more troubling conflict – a U.S.-Russia proxy war that could last for years and do even more damage to the already struggling country.

Will the U.S. willingly turn Venezuela into another Syria just to keep its oil out of Russian hands? The size and value of Venezuela’s massive oil reserves makes it seem likely.