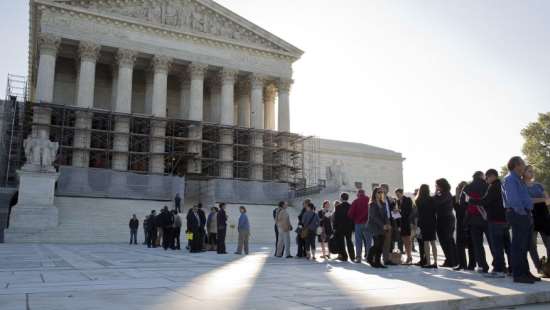 The Supreme Court has upheld Michigan's affirmative action ban, ruling that the state has the right to determine whether racial preferences can be considered in college admissions.

In a 6-2 ruling on Tuesday, the justices said that a lower federal court was wrong to set aside the change as discriminatory. The Supreme Court ruled that Michigan voters had the right to change their state constitution to bar public colleges and universities from using race as a factor in admissions.

Justice Anthony Kennedy, writing for the majority, suggested that right extends even beyond college policies.

"There is no authority in the federal constitution or in the [courts’] precedents for the judiciary to set aside Michigan laws that commit to the voters the determination whether racial preferences may be considered in governmental decisions, in particular with respect to school admissions," he wrote.

Kennedy said voters chose to eliminate racial preferences because they deemed them unwise.

"This case is not about how the debate about racial preferences should be resolved. It is about who may resolve it," Kennedy said.

In dissent, Justice Sonia Sotomayor said the decision tramples on the rights of minorities, even though the amendment was adopted democratically. "But without checks, democratically approved legislation can oppress minority groups," said Sotomayor, who read her dissent aloud in the courtroom Tuesday. Justice Ruth Bader Ginsburg sided with Sotomayor in dissent.

At 58 pages, Sotomayor's dissent was longer than the combined length of the four opinions in support of the outcome.

Justice Elena Kagan did not take part in the case, presumably because she worked on it at an earlier stage while serving in the Justice Department.

The Associated Press contributed to this report.